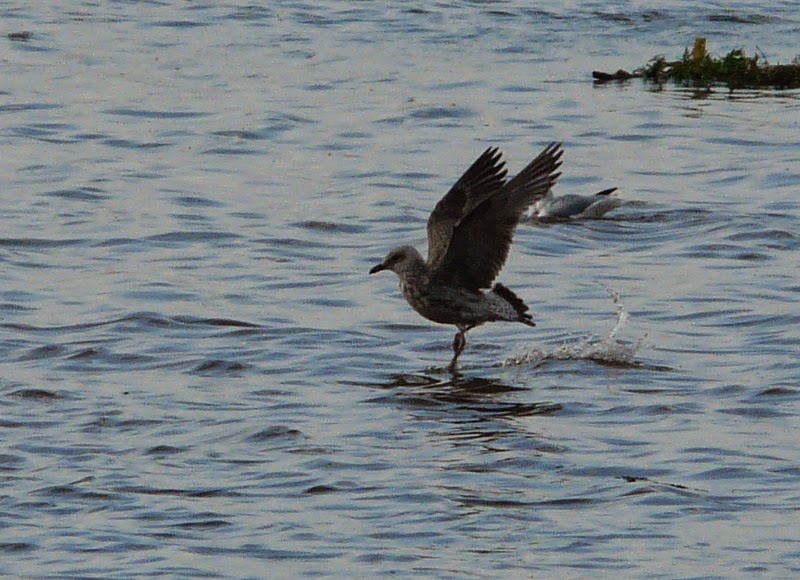 I did an hour or so sea-watching, in persistent rain, with Nick this morning. It was uneventful apart from a wonderful small pod of bottle-nosed dolphin in the bay. All that was recorded was 19 common scoter, 1 turnstone and small numbers of terns. I later decided to sea-watch, again from the raised beach huts, as the rain cleared, and this proved to be much more successful. Totals included 11 common scoter, 1 little tern, 1 juv black tern (@1420 - my first of the autumn), 1+ great skua, 2+ arctic skua, 4+ manx shearwater, 1 balearic shearwater, 3 shearwater sp, 1+ juv arctic tern, 1 mediterranean gull, 1 adult-type little gull (possibly the regular 2w bird?) and 2 swift. Also large numbers of sandwich tern and 'commic' tern with small numbers of fulmar, gannet and kittiwake.
I wish I'd made a concerted effort to count the terns but it was really difficult to work out if birds were constantly moving through or just moving around the bay. My gut feeling is that large numbers were streaming in but I just can't be sure. It was also difficult to be sure of skua numbers as I frequently had 1 great skua in view, but it could feasibly have been the same bird loitering. Same with the arctics.
A quick look off Mudbank produced another juv yellow-legged gull, 8+ mediterranean gull and 1 kittiwake, that looked in poor condition.
Yesterday morning on Orcombe there was 5 tree pipit, 36+ hirundine sp, 5 yellow wagtail, 3 meadow pipit, 1 curlew, 1 little egret, 1 swift, 1 alba wagtail, 2+ willow warbler and 1 chiffchaff.
In the estuary, off Mudbank/Imperial there was 1 little tern, 5 wigeon, 6 whimbrel, 1 greenshank, 17+ ringed plover, 4+ dunlin, 11+ mediterranean gull, 1 bar-tailed godwit, 1 turnstone and c40+ common tern. 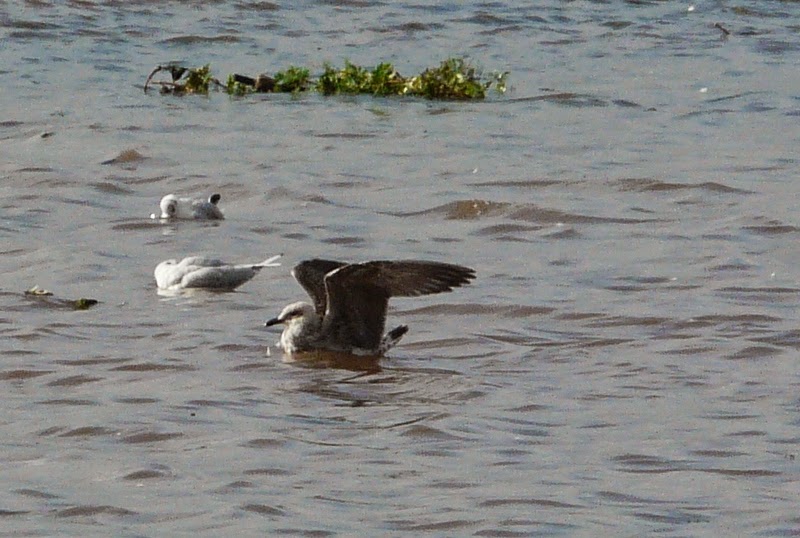 Another small yellow-legged gull and certainly not what I'd call a classic. A relatively weak-billed individual, diminutive in stature and rather gentle in demeanor. Additionally I couldn't see any sign of moult, although the bird was a bit distant and the light was poor. You'd expect to see a number of new first-winter mantle and scapular feathers by now. It does however posses the requisite tail and wing pattern and the dark-based greater coverts looked fine. 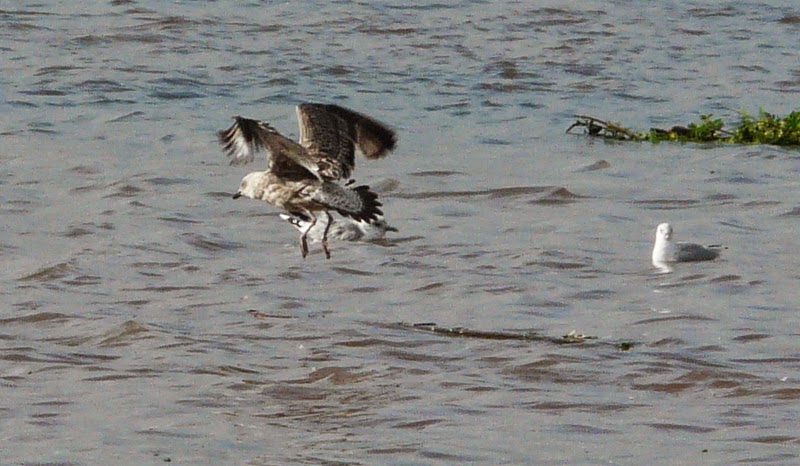 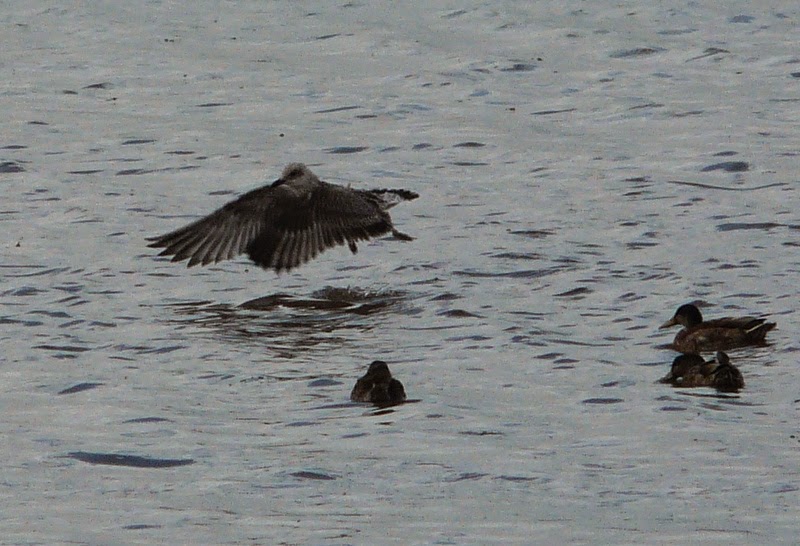 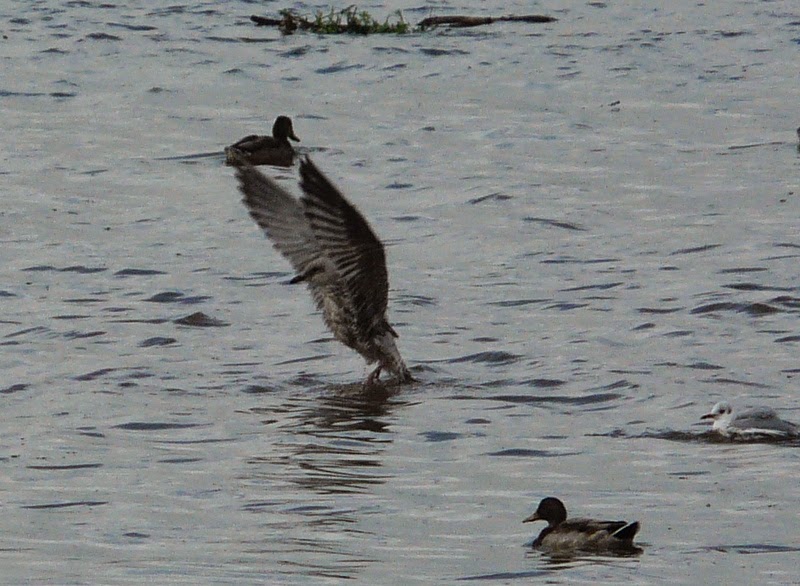 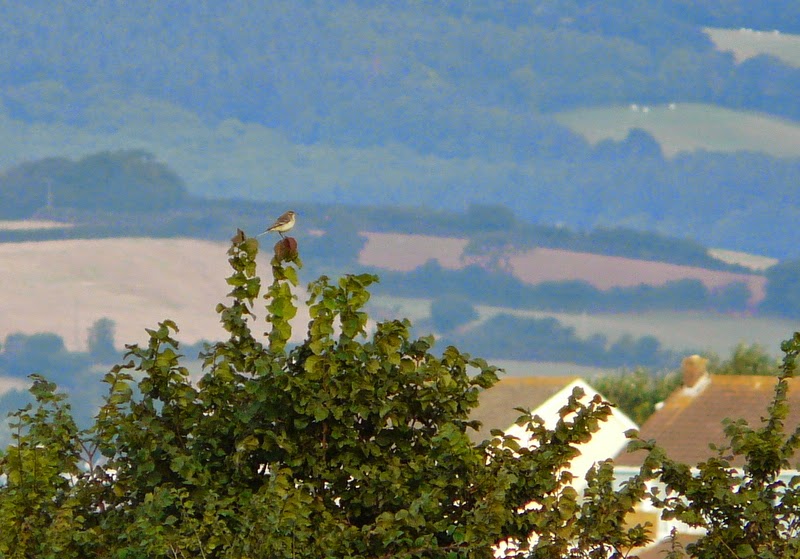 One of yesterday's yellow wagtails - obligingly perched for a change. The birds on Orcombe are almost invariably hidden in long grass or just dots in the sky.
Posted by matt knott at 12:35