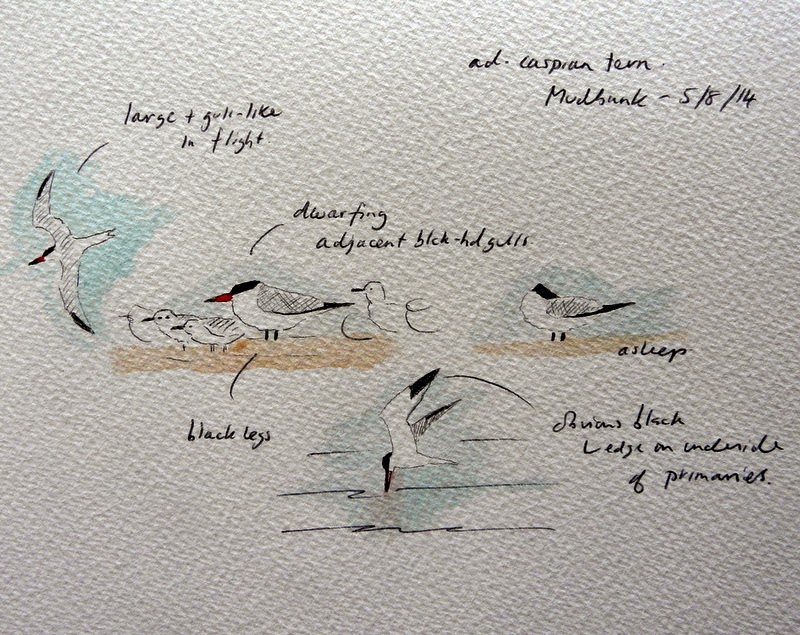 Caspian Tern sketches - done as soon as I got home.

It turned out all right in the end! Since my last post I've picked up the car (which needs some work done on the steering column) and shelled out £70 to have the washing machine fixed. To say I wasn't in the best of moods is an understatement. I've been checking the river now and again as the tide creeps in but genuinely didn't hold out a lot of hope of re-finding this morning's Caspian Tern. Shortly after 1230 I casually squinted through the scope from Joel's bedroom window and the first bird I looked at looked like a hulking great tern! Again the shakes started and I flapped like you wouldn't believe - slipping as I lurched out the front door and screaming at Lu like a demented idiot to pass me my camera and notebook as I tried to put my shoes on at the same time. I jumped in the car and hammered down to Mudbank where at last I was able to appreciate a mammoth Caspian Tern - red bill and all! Having not learned my lesson from this morning I then rattled off a load of texts and very shortly Hoppers, Chris Townend, Nick Pratt, Stoney, Brian Heasman and Tim Worfolk were there and watching the bird. I was finally able to enjoy it though my camera couldn't cope with the distance and my pencil had vanished, so the sketches were drawn from memory once I got back home.
This is Devon's third Caspian Tern. The first was on the Axe way back in 1966 and the second was at Dawlish Warren on 27th July 2004. I was actually sat in the hide with the late John Fortey, Bob Bailey and a chap from Yorkshire when that bird flew in and landed in front of us. The guy from Yorkshire found it, Bob called it and John and I wondered how the hell we'd missed it flying in! That bird stayed for just a couple hours before heading out to sea so I hope this bird sticks around to make it on to a few more Devon lists!