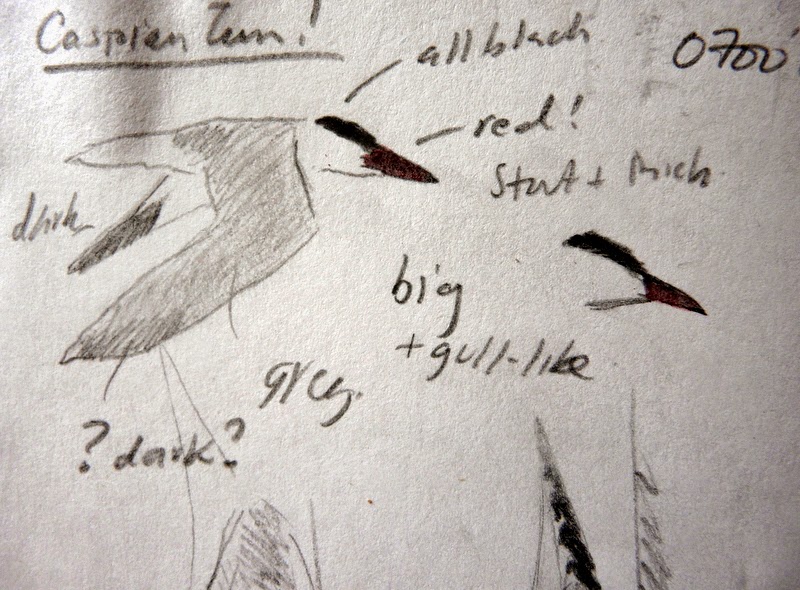 I should be jumping around for joy at the moment but in truth I'm feeling utterly deflated. At around 7am this morning, I was scanning the sea from the raised beach huts, when this bird flew into my scope view. The immediate impression was arresting as the bill appeared to be thick and red! I stared at it in disbelief as it flew lazily past and concentrated  solely on the bill to make sure I wasn't imagining it. No it was definitely deep red, stout and very broad-based. As the panic set in I realised I needed to get more detail on the bird so I concentrated on the wings as the bird banked away from me and drifted out in to the bay. There appeared to be a good dark wedge on the underside of the primaries but the upperwing was difficult to get detail on, appearing uniformly grey with perhaps a darker wedge on the outer primaries. The whole bird appeared large and gull-like. By now I was physically shaking and decided I needed to let the Warren birders know of the bird's presence. What I should have done at this point of course is keep watching and taking notes but I didn't. Of course after I'd fired off a load of texts (apologies to anyone I missed but I wasn't thinking very straight) I couldn't re-find it and subsequent searching by myself and others has drawn a blank.
The whole episode was brief and exciting but I feel really flat because nobody else has seen it and I didn't manage to get a record shot. I've got the sort of brain that always questions what I've seen and worries I haven't seen enough, so at this point in time I'm not even sure I'll submit it. The car is in the garage as I write this so I'm limited as to how much searching I do but the scope is set up in my son's bedroom and pointing at the river so you never know.
Also this morning - barely worth mentioning - 1 great skua, 2 turnstone, 30+ sandwich tern and 1 common tern. late yesterday evening 2 arctic skua flew south together.
Posted by matt knott at 04:06