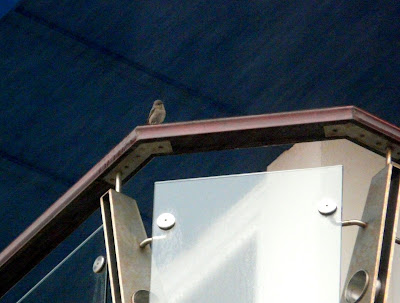 The Black Redstart was sheltering from heavy rain under the cover of the Shelly Beach apartments late this afternoon.

Another weekend with little to report. A quick look off Maer Rocks with Nick this morning produced 90+ Common Scoter, 10 Great Crested Grebes, 6 Red-breasted Mergansers and 3+ Red-throated Divers. The drake Scaup was off Mudbank yesterday and today. Also off there today - 2 Goldeneyes and a Lapwing north over.
I had a look for the Bonaparte's Gull off Shelly Beach this afternoon but no joy. The only birds of note were an adult Kittiwake on Bull Hill and the regular Little Grebe in the marina. The Black Redstart was on the apartments.
Late after work on Friday afternoon I finally clapped eyes on a Mediterranean Gull - an adult and my first in Exmouth this year believe it or not. I also had a high count of 9 Goldeneyes off Mudbank on Friday. The little flock included 3 males, 2 of which were displaying to the females. Fifty two Pintail off there on Friday too. 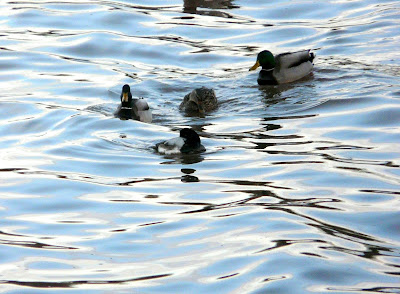 Scaup
Posted by matt knott at 09:46 No comments: 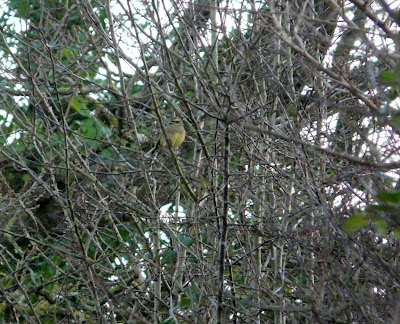 Up to six Cirl Buntings at the local sight this morning - the most I've ever seen. Numbers of other stuff unremarkable with c50+ Chaffinch, 1 Reed Bunting, c5+ Yellowhammer, 2 Mistle Thrushes and 25+ Redwing. The crop is still being planted but apparently no seed has been put out on the tables for two years.
Otherwise - 8 Goldeneye off Mudbank, including 1 adult drake, was the most I've seen in ages but the Scaup has again gone walkabouts. 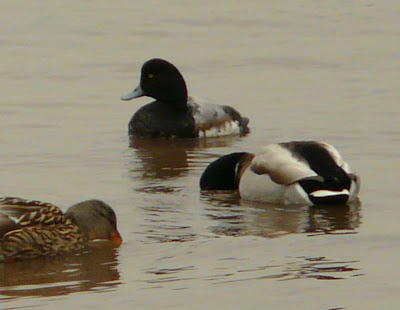 Another quiet week bird-wise (but busy work-wise) with very little time out in the field. Bird of the week was a Black-necked Grebe off the seafront late after work on Tuesday. It was presumably the bird that has been reported for some time off the Warren. It was accompanying 2 Great Crested Grebes and 3 Wigeon.
Today there's little else to report though the long-staying Scaup has been off Mudbank all day. Also off there a single Teal and c40+ Pintail.
A quick look off Maer Rocks first thing this morning produced just 4 Purple Sandpipers and 28 Dark-bellied Bent Geese. 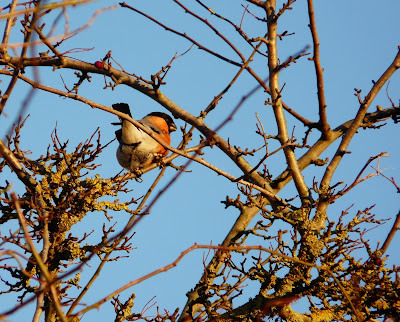 Bullfinches seem to be popping up everywhere at the moment. Long may it last! 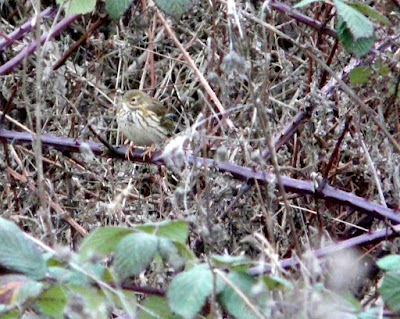 One of two or three Meadow Pipits wintering on Warren View playing fields. Also on there this afternoon - 2 Mistle Thrushes and a Chiffchaff.
More of the same this weekend. The first-winter male Scaup reappeared off Mudbank yesterday and was still present over the high tide this morning. What was almost certainly a Long-tailed Duck followed 2 Red-breasted Mergansers towards the river mouth early on this morning. A check of the lower estuary subsequently revealed c20+ Red-breasted Mergansers and a probable Slavonian Grebe. This afternoon there were good numbers of Herring Gulls off the seafront, along with c25+ Common Scoters and a couple Red-throated Divers. Yesterday the 2 Firecrests showed well behind the cricket club and that's about it. Glaucous Gull must be on the cards any minute now. 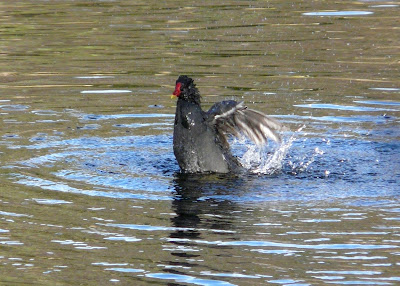 Moorhen - Bystock Pond
Posted by matt knott at 08:13 No comments: 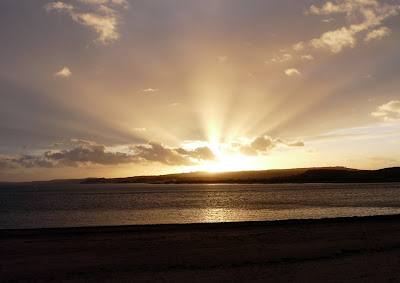 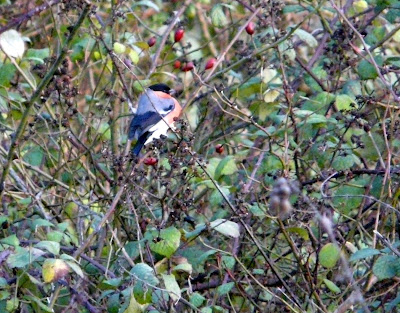 I've noticed a few wheezy trumpet-like notes emanating from Bullfinches recently - from both Castle Lane and Littleham sites. I'm not suggesting for a moment that they're anything other than local birds but I'm a bit miffed as to why I've never noticed these calls before.
Posted by matt knott at 09:23 No comments: 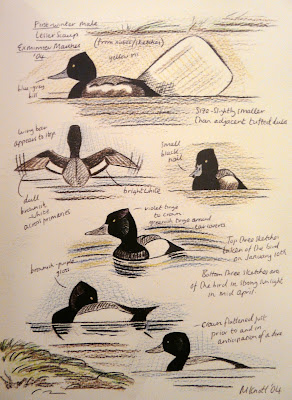 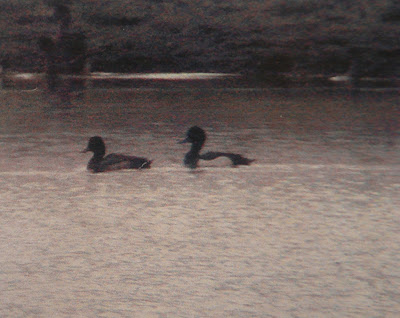 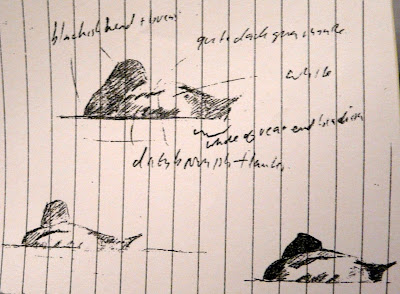 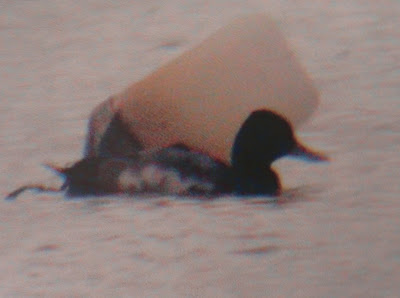 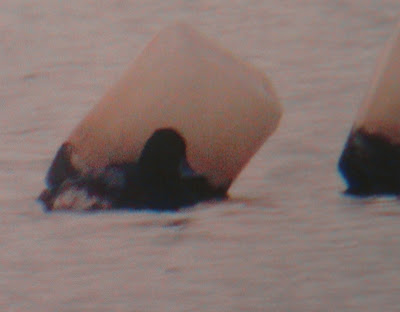 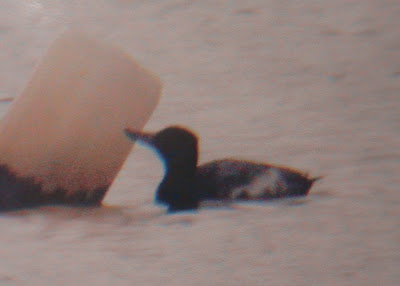 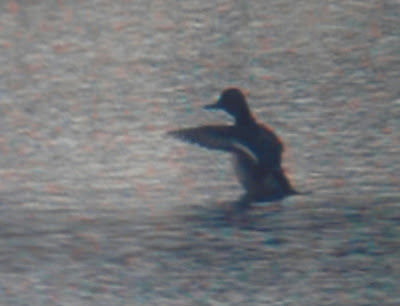 This shot of Mike's was very helpful in getting the record accepted by the BBRC. It shows the all-important truncated wing-bar - nice and bright across the secondaries, abruptly fading to grey across the primaries. Anyone re-locating the Slapton bird should check for this feature, as well as the small black nail at the bill tip.
Posted by matt knott at 12:17 4 comments: 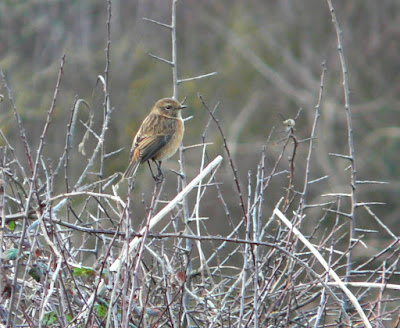 Stonechat - Orcombe Point
First thing this morning there was a female-type Long-tailed Duck off the seafront. It looked restless, flying around, ditching down and then flying off again. There were at least 100 Brent Geese off Maer Rocks and the sallows below Foxholes held a male Blackcap, a Chiffchaff and a Goldcrest.
The two wintering Firecrests were quickly located in their usual spot behind the cricket club and at least one Goldcrest was close by.
I checked the 'Gut' and found the Black Redstart still present along with the two regular Meadow Pipits.
I couldn't find the Scaup off Mudbank today though it was still present on Friday evening. The only things of note were 3 female Goldeneye, 14 Great Crested Grebes, 6+ Sanderling and a Ringed Plover along with the usual stuff.
Finally there were 8 Purple Sandpipers on Maer Rocks late on Friday afternoon. 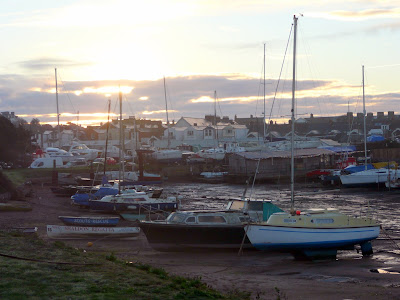 This is the small inlet known as the 'Gut'. Not a nice name but a lovely little area that's currently home to a wintering Black Redstart. It lies between the Imperial recreation ground and Shelly Beach. The wooden construction is the River Exe café that's normally moored out on the river during the summer months - a great place to enjoy fish 'n' chips.
Posted by matt knott at 08:48 No comments: 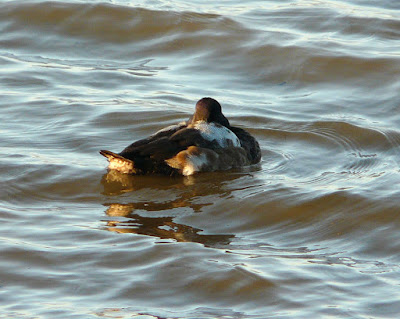 The light was beautiful today so I attempted more photos of the Mudbank Scaup. It was really close-in this morning, often out of sight below the railway line. Not sure where it's getting when it's not off Mudbank. Also 100+ Redshank and 200+ Dunlin off there over the high tide. The Kingfisher showed well too.
Yesterday there was a male Blackcap in the Foxholes sallows and off Maer Rocks there were two small grebes. They were almost certainly Black-necked Grebes but the light wasn't great and they were just too far off for me to be sure. The fact that they kept disappearing in the swell didn't help either. Off Mudbank yesterday - 82+ Pintail, a male Teal and a pair of Peregrines attempting to chase down a Redshank that somehow managed to stay alive. A Mistle Thrush was on Warren View playing fields and a single Chiffchaff was in the Maer long-stay carpark. 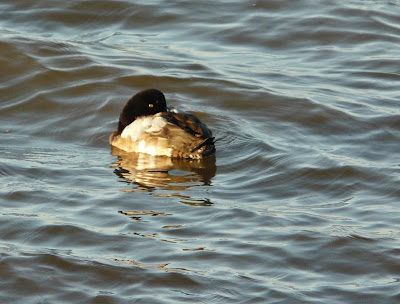 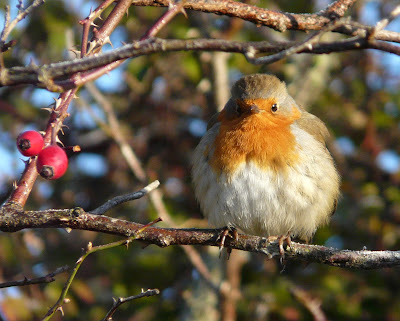 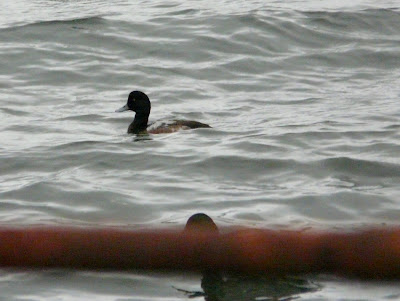 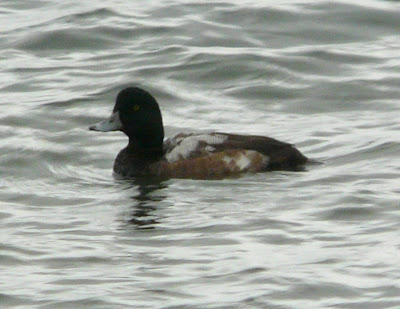 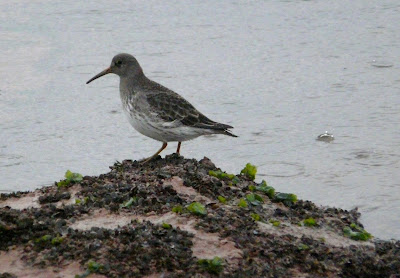 One of 8 Purple Sandpipers on Maer Rocks this afternoon.
Posted by matt knott at 08:33 2 comments: