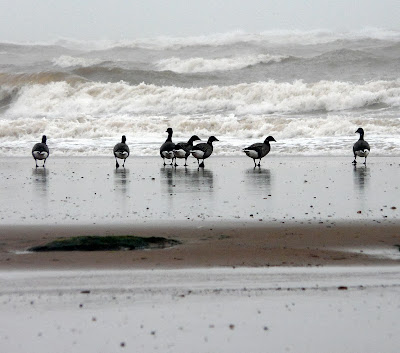 Yesterday I walked the dog from the lifeboat station to Sandy Bay. The weather was horrendous but the miserable conditions meant I pretty much had the beach to myself. This group of dark-bellied brents were the only birds of note although there was a decent gathering of large gulls spread along the beach. Terry Smith fared better with a bonxie along the seafront.
Birding is usually more productive in the aftermath of a storm so I spent the first couple of hours of daylight this morning at Orcombe Point with totals as follows: 1 razorbill, 2 red-throated diver, 3 common scoter, 9 diver sp, 6 auk sp, 1 great crested grebe, 1+ curlew, c40/50+ skylark, c40+ linnet, c10/20+ meadow pipit, 18+ snipe, 1 jack snipe, 1+ turnstone, 2 great northern diver, 2 eider and 1 pied wagtail. I'm always pleased to see jack snipe. This morning's bird was in the top fields on private land. It is a species that I now expect annually though I've had more autumn than winter records presumably because I don't do Orcombe much in the winter. The fields are obviously pretty wet at the moment so I'm hoping for more.
Late this afternoon I nipped down to Exmouth Docks and was pleased to pick up the long-staying adult bonaparte's gull. It was with a couple black-headed gulls on Bull Hill so it was distant. The last time I saw this particular bird was on Exmouth beach on July 18th 2011! It was initially found by Chris Townend on the Otter estuary on April 13th 2011.
Posted by matt knott at 09:50