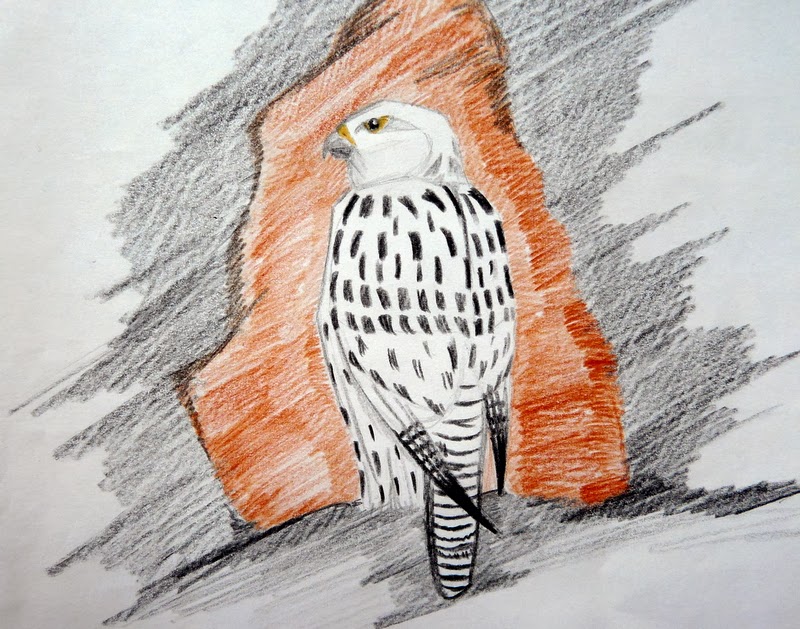 April 2nd 1986 - I'd not long gone to bed on the evening of April 1st 1986 when the phone rang downstairs. A few minutes later and Dad came up to tell me the fantastic news that he had just spoken to a friend who'd heard about a gyrfalcon turning up at Berry Head! Dad said he'd take me early in the morning but his work commitments meant we'd only have a narrow window of opportunity to get the bird. Minutes later he came back up and reminded me of the date - it was surely a hoax! I was utterly deflated and needless to say got very little sleep.
Up before dawn the next day and as we approached Berry Head we genuinely didn't know if we were completely wasting our time or about to encounter the bird of a lifetime. As we headed along the approach road we were greeted with the incredible spectacle of masses of twitchers silhouetted against the skyline - my first proper twitch and surely a sign that this was no hoax! Excitement however soon turned to crushing disappointment when we discovered we'd just missed it. I was to experience for the first time that horrible gut-wrenching feeling that accompanies a dip. Frustrating minutes ticked by and I tried to ignore the fact that we would soon have to leave but leave empty-handed we did.
To my intense relief however Dad promised to bring me back later in the day and so it was at 4pm that I finally clapped eyes on the magnificent gyr. We scoped it from the fortress wall as it sat in the sunshine on the quarry face. I was able to sketch it and soak up the atmosphere of the big twitch but I remember that by the time we had to leave, at around 5.40pm I was dead keen to see it fly. I'd heard the stories of it predating jackdaws and wanted to see it in action but it sat tight and my lasting image is captured in the above sketch.

The bird was found by Nick Ward on March 31st and stayed until April 9th representing the 8th record for Devon. What was presumed to be the same bird was then on Lundy from April 11th to 12th 1986. Nick then famously found another white gyr at Wembury on April 6th 1998 but I was abroad at the time so missed it. 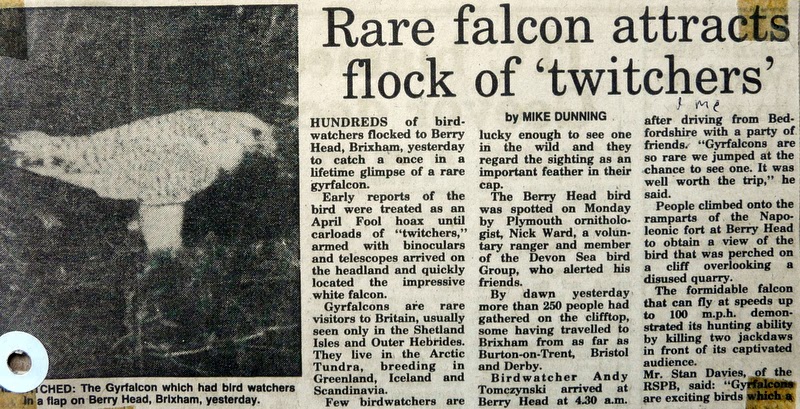 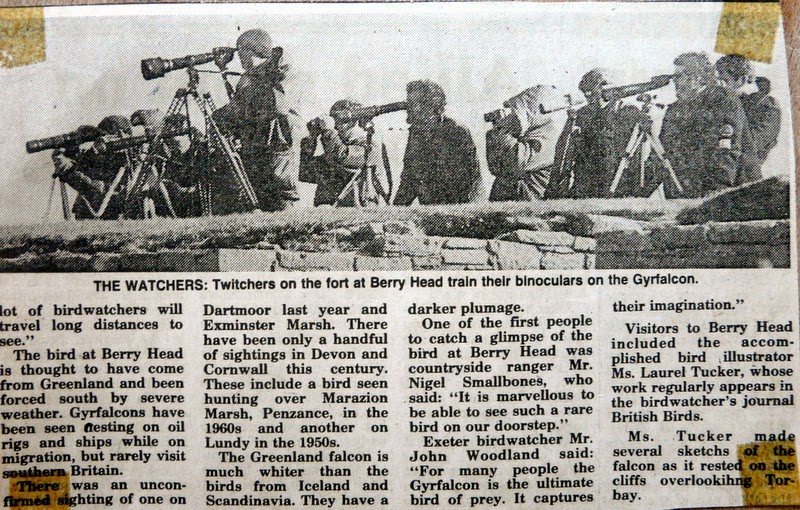 I always think of the Berry Head gyr as my first Devon rarity and first proper twitch. I had seen the Exe lesser white-fronted goose earlier in the year but that has since not made the grade as a wild bird and it can't compete with the majesty of a white morph gyr. I've always fancied the rugged coastline around Bolt Head and Soar for Devon's next but the north Devon coastline is more likely I suppose given that five have now been seen on Lundy (The Birds of Devon - M Tyler).
Posted by matt knott at 14:43