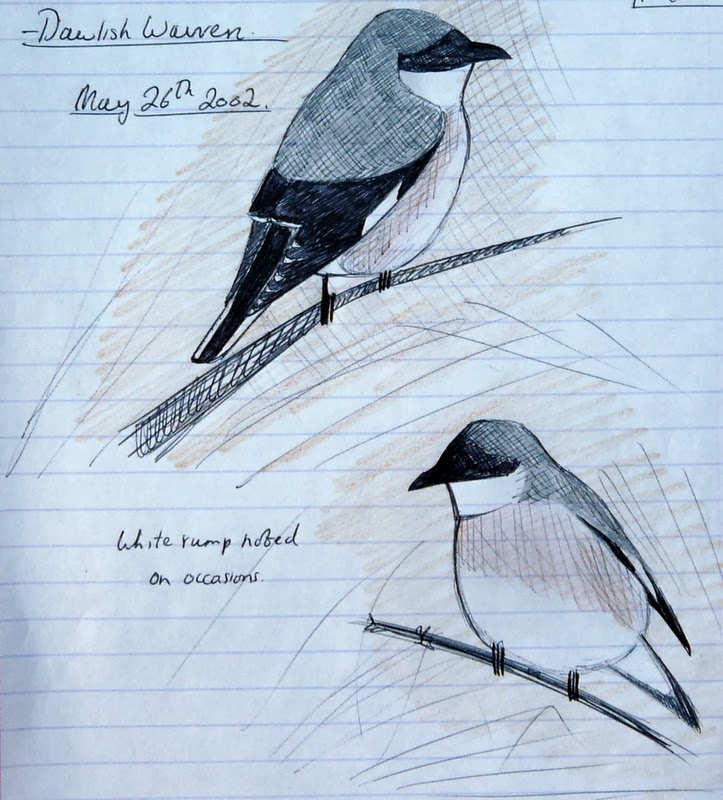 May 26th 2002 - the day Lee Collins tested my marriage!
Lu and I had been married exactly a year and Lu was pregnant with Maisie, who is now eleven years old - can't believe it. A big day for us - our first wedding anniversary and exciting times. We planned  a lazy lie-in and a relaxing morning followed by lunch out. I was going to prepare a nice big romantic breakfast when the phone rang. I just knew it was going to be a rare bird. It was simply inevitable. I prayed it was nothing too special but John Fortey's prophetic words were still ringing in my ears "Why get married at the end of May? Something good always turns up at the end of May". I answered the phone to Tom Whiley who relayed the message "Lee's got a grey shrike sp at Dawlish Warren - probably lesser grey". Bollocks!!!!!
I'd dipped the Otterton bird and badly wanted to see this one. Shrikes are simply must-see birds and although I was familiar with lesser grey from trips abroad (and a Norfolk individual twitched with Kev - see 'field sketches' page) a Devon bird was too big a pull! Being the incredibly understanding wife she is, Lu said "just go". I vowed to be quick and was as good as my word - back home in Exeter for 1015.
A speedy twitch was only possible because I ran the length of the Warren, catching up with John and Tom and meeting Lee on Warren Point. He was understandably dead chuffed with his discovery. We lined up on the dune ridge looking down on to the point but it was the warden, a little way behind us, who picked the bird up first. We hurried back towards him and the bird looped up onto a bramble - Magic! I watched and sketched the bird for a short while as it shifted from bush to bush, occasionally dropping in to the marram grass for a prey item. I wanted to study it for longer but there was no way I was going to push my luck any further on my first wedding anniversary, so I jogged back to the car and sped back home.
The rest of the day was lovely - funny how the day always takes on a particularly warm glow after a good bird!
This was Devon's third and last lesser grey shrike following the Otterton bird in July 1992 and one on Lundy in September 1961. (The Birds of Devon - M Tyler). I think a lot of birders got the Otterton bird but some, like me, presumably dipped and were very grateful to Lee for his find.
Incidentally it has been four years since John Fortey passed away. A truly lovely man and amazing birder. He was extremely modest, always playing down his capabilities and incredible finds. Pete Dennis once said to me "if John ever tells you he thinks he's seen something - go and see it because it will be what he thinks it is". I can honestly say I've never heard a bad word said about him and everyone who knew him remembers him with great fondness.