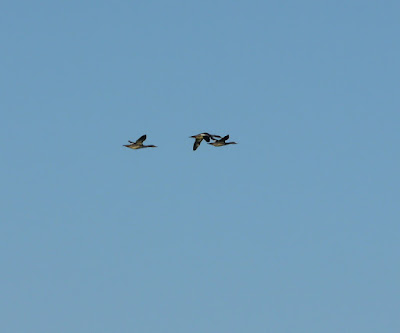 3 Goosander arrive some time after 6am,  heading towards the Warren.
After a terrible night's sleep I was awake at 4am and downstairs marking coursework. Not a great start to the day. At 5am I nipped down to Maer Rocks and sat on a bench so that I could scan the bay. My fourth yellow-legged gull in four days flew in and mooched around on one of the sandbars, but it was always too distant for decent photos. Scope views however showed it to be  typically long-winged,  big and thuggish. There was a light but steady passage of black-headed gulls heading towards the river and with them, 4 mediterranean gulls - 2 adults and 2 juveniles. A pale phase arctic skua appeared to be doing laps of the bay and my first grey wagtail of the summer went over, along with 5 curlew. Tern numbers seem low again with just a handful of sandwich terns providing targets for the skua. The best birds however zoomed over just as I was thinking of getting back to get ready for work - 3 redhead goosanders. July is fast becoming the month to see this species in Exmouth. Last year I had a flock of 10 on July 12th. 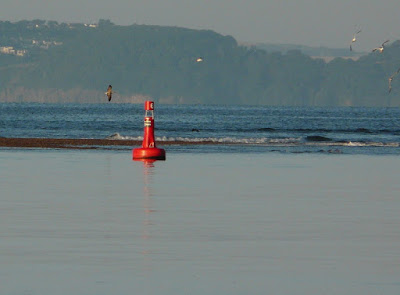 Distant juv YLG over buoy 6. Pretty distinctive, even at range.