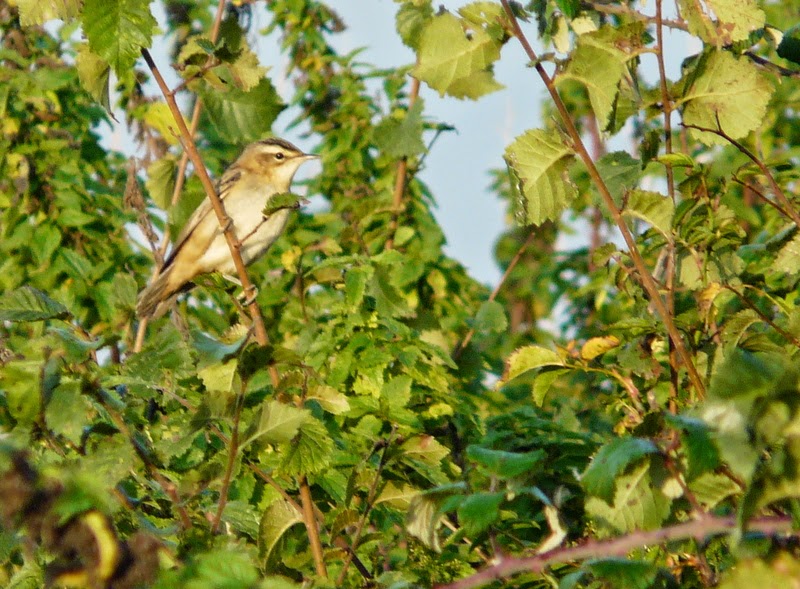 Sedge Warbler - 2 showed well together in brambles along Gore Lane.

I birded Orcombe with Nick this morning, from dawn til 0830. We did a pretty decent circuit of the main spots but both had to leave to take our sons to football. As we were putting our stuff back in the cars on Foxholes a clear piping 'pyu' call penetrated the quiet - dotterel! It couldn't have been too far away when first heard but wherever it was we couldn't pick it up. It called again a number of times but was clearly gaining height and heading up towards the high ground. I've dreamed about hearing that call on Orcombe for many years so to realise the dream was weird. The call was clearly wader-like in quality and unlike any other wader I know - slightly downslurred and 'clipped' in quality. I felt reasonably confident it would be stood in the newly cut, flat 'top field' but it wasn't and a subsequent check this afternoon was equally fruitless. As chuffed as I am though, I won't submit this record to the DBWPS rarities committee, because a heard-only fly-over doesn't compare to seeing the bird well. It just doesn't 'cut the mustard'. It won't be going on my find list either. I guess if I was hearing dotterel on a regular basis it might be different but I'm not! I'm confident we will get one on the deck up there some day though.
Other species today included c120+ meadow pipit (in 2 large grounded flocks), 1+ goldcrest, 1 egret sp, 1 curlew, 3+ grey wagtail, 4+ yellow wagtail, 2+ chiffchaff, c5+ phyllosc sp, 2+ alba wagtail, 4 house martin, 3 swallow, 2 sedge warbler, 5+ wheatear, 2+ stonechat, 3+ blackcap, 1 grey heron and 1 tree pipit.
Mudbank produced 12 brent geese distantly and this afternoon they were confirmed as 10 dark-bellied brent goose and 2 pale-bellied brent goose. Also there 45 pintail, 100+ wigeon and 2 ad mediterranean gull. 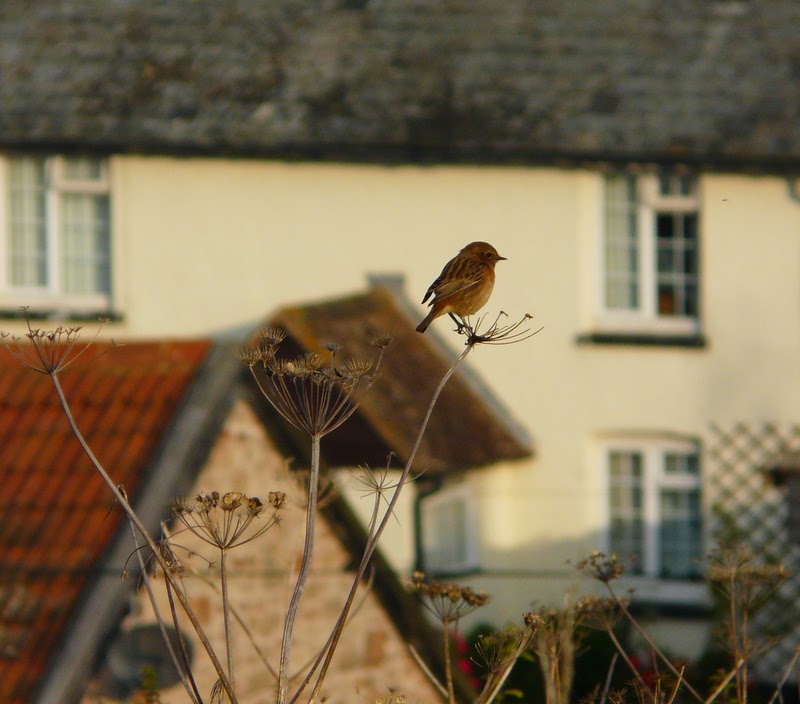 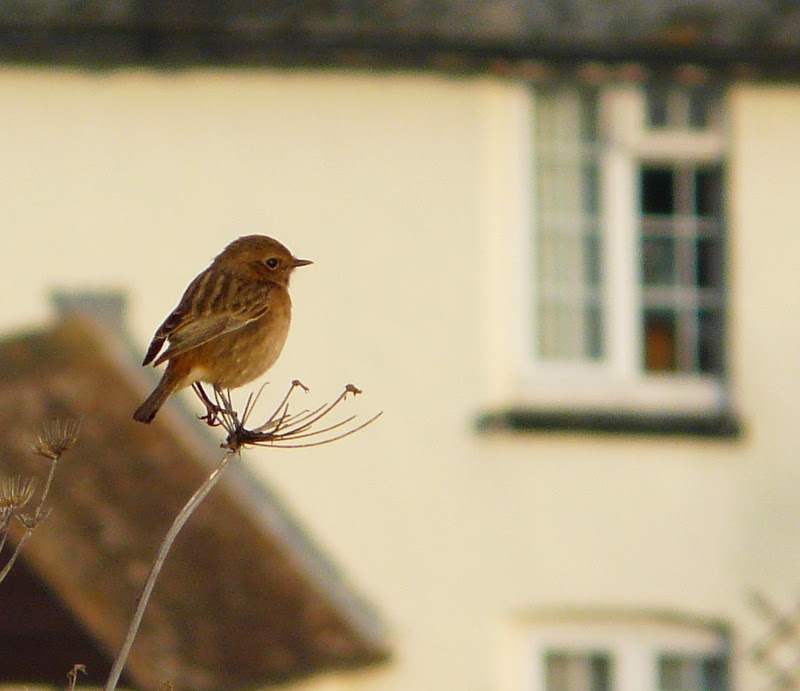 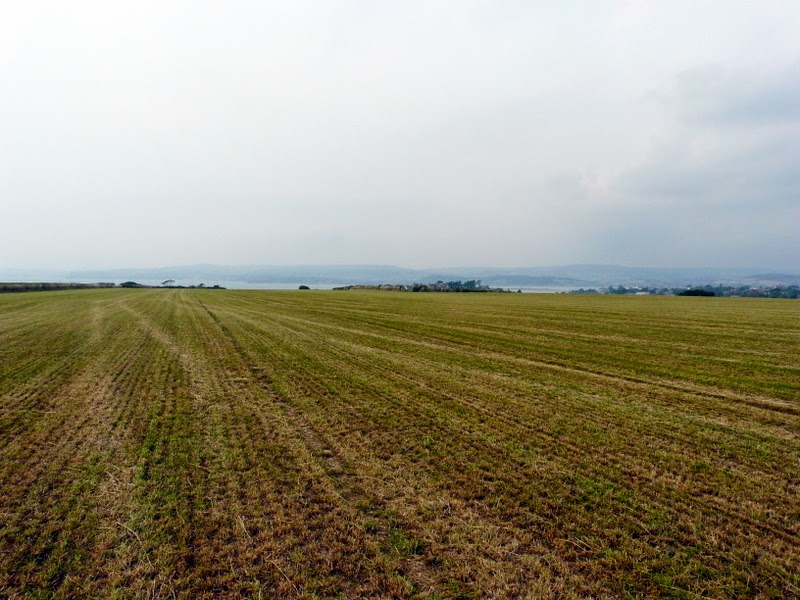 The newly cut 'top field' looks good for dotterel but it obviously isn't quite good enough! There were 50 meadow pipits and 2 wheatear in there this afternoon though. 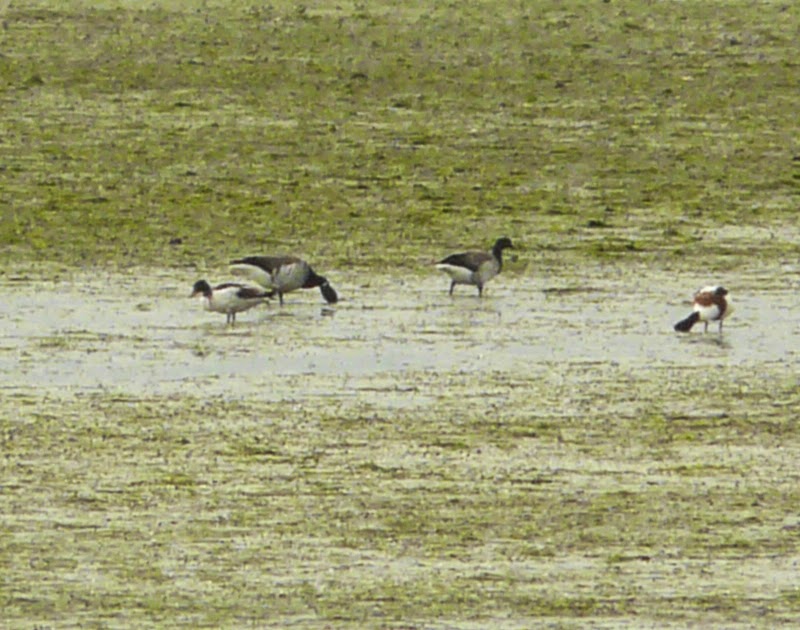 Pale-bellied Brent Geese with Shelduck. First brents back today, with 10 dark-bellieds.
Posted by matt knott at 08:07