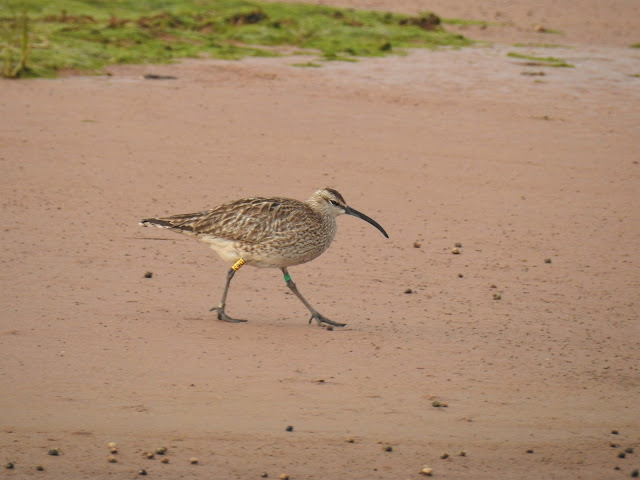 In Thursday's post I included some details of a colour-ringed Whimbrel off Mudbank. I managed to misread the ring code as O63 but it turns out it was D63 (thank you Lee and Kev). I correctly guessed that Lee would have already logged it, but hadn't suspected that I'd actually noted it myself, just over five years ago, on April 6th 2017. See here. Thank you Lee for pointing that out to me! 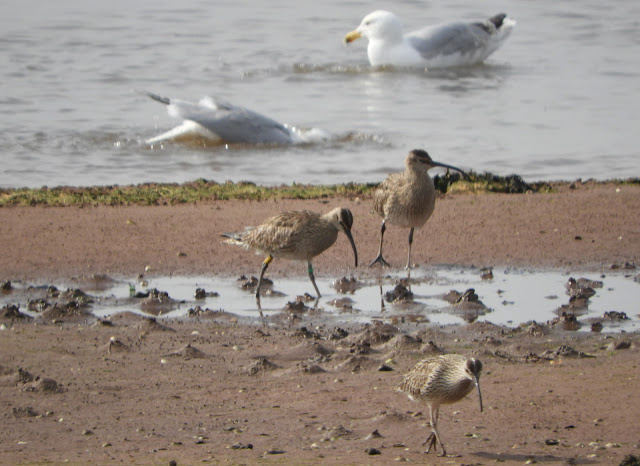 On Thursday, D63 was associating with a loose flock of at least 84 individuals.

D63 was ringed as a 2cy, by Tony Cross, at Llansantffraed, west Wales on May 8th 2015. Lee recorded it at Dawlish Warren from April 8th - April 30th 2016, and again in April 2017. It was  recorded again (by Lee of course) in August 2017, and then again in the first week of May, 2019. According to Lee, there are no records of this bird away from the Exe, but Lee recorded it again on April 23rd 2020 and four times between April 27th and May 7th 2021. This series of sightings shows that the river Exe is a very routine, and therefore very important, staging post for this bird, which migrates from its wintering grounds somewhere in Africa, to its breeding grounds, presumably in Iceland. Lee's dedication to ring- reading continues to reveal some fascinating information. Thanks Lee - tremendous work!

Keeping with the ringing theme, this yellow-flagged (4P) Curlew was off Mudbank today. Hope to God I've not misread this one! This from Lee - "4P is part of a 'Head Start' program. This bird, ringed in Norfolk in August 2021, has over-wintered on the Exe from Exminster to Dawlish Warren. It appears to be staying so will presumably summer. This behaviour is common in immature, non-breeders." Thank you once more Lee. 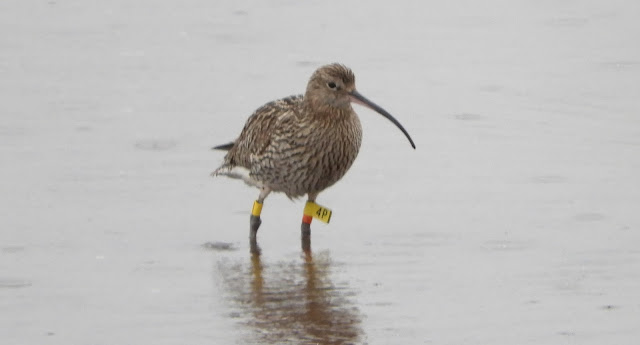 A quick catch-up for the last couple of days - today, 6 Gadwall were completely unexpected, roosting this morning on Cockle Sands. My first record in Exmouth this year. Also - 55 Whimbrel, 2 Dark-bellied Brent Geese, 35 Bar-tailed Godwits, 3 Black-headed Gulls, the first-summer Yellow-legged Gull and a party of 10 Sand Martins flying upriver. Nearby, at West Lodge - the singing Sedge Warbler still on territory, in the small reedbed, and a second individual, singing from a hedge on the opposite side of the field.

On Orcombe Point - 2 Sedge Warblers, 1 Curlew, 1 Willow Warbler, 2 Wheatears and 12 Swallows. Offshore - 1 Guillemot in with quite high numbers of gulls, and at least 16 Sandwich Terns

Yesterday I recorded my first Common Tern of the year, off the seafront, and my first Common Sandpipers of the year - a group of three birds of Mudbank for the majority of the day. Also off there - 90+ Whimbrel, 2 Dark-bellied Brent Geese, 38 Bar-tailed Godwits and a Dunlin. Also 3 House Martins off there.
On Orcombe Point - 5 Wheatears, 2 Willow Warblers and 1 Sedge Warbler. A high-flying Great Northern Diver powered into the bay.

Bar-tailed Godwits have been very much a feature off Mudbank lately. Such beautiful birds.
Posted by matt knott at 10:40