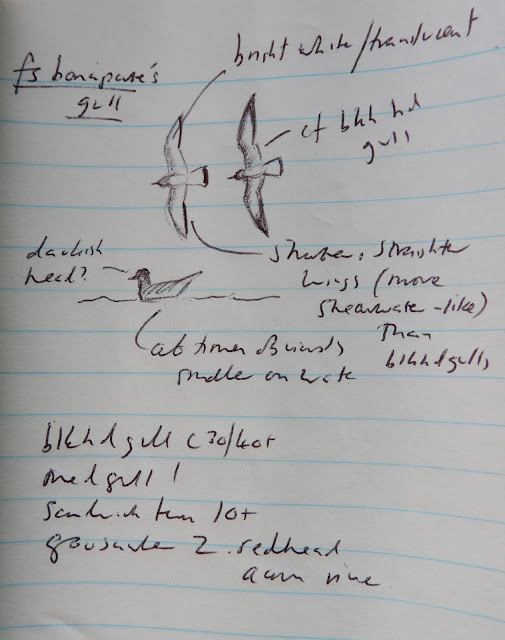 A quick look off Mudbank, after dinner this evening, was initially disappointing. I thought there'd still be some mud exposed but there wasn't. Quite soon however, I realised there were some Black-headed Gulls feeding way out in the middle of the river, so I grabbed the scope and checked through them, quickly clapping eyes on a first-summer Bonaparte's Gull. Unfortunately, in the evenings from Mudbank,  you're looking right into the sun, so it was never easy to pick out. I was joined by Derek and we moved round to the Imperial recreation ground, but it was still distant and difficult to pick out. At one point it disappeared for quite a while  and was eventually picked up,  sat on the water, well away from the main feeding flock. It was too tricky for a photo, even by my standards, so I scribbled some sketches. Also in the flock - 10+ Sandwich Terns and at least 1 Mediterranean Gull. A big surprise was the sudden appearance of 2 Goosanders that flew through the scope view whilst watching the gull. I think there's a reasonable chance it'll hang around, as others have tended to do, and will try from the Imperial rec before work tomorrow morning.
Nearby, the first-summer Yellow-legged Gull was again in the recycling centre. 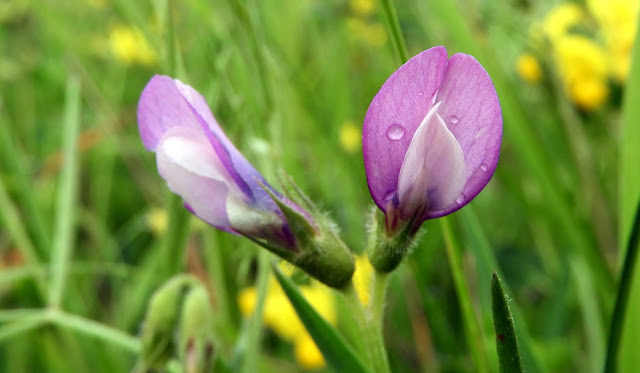 Bithynian Vetch is now in flower along the cycle path.
Posted by matt knott at 13:27