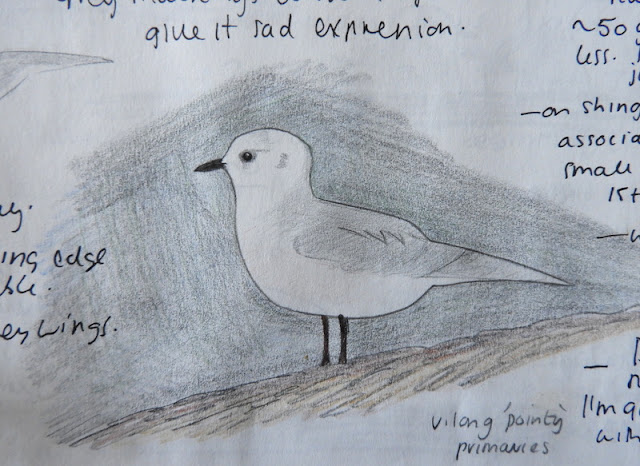 The following is some personal documentation of five of the six Ross's Gulls that have been seen in Devon. The only one, which I didn't see, was the first which was on the Plym Estuary from the 13th to the 30th March 1988 (The Birds of Devon - Michael Tyler). Ironically, I was actually on the Plym on March 13th 1988, the day of its discovery, twitching a Spotted Sandpiper. If I recall I wasn't too upset to miss the gull as the Spotted Sandpiper was a new bird for me.
Many thanks to the finders of all these birds - each one has been special as far as I'm concerned and as a gull enthusiast it's one of my most wanted 'self-finds'.
Account for 19/2/95 - I got up shortly before 6am, had a quick shower and set off for Slapton. I put some petrol in from the Esso Station and grabbed some food. I arrived as dawn was breaking and was the only person there. At first I went to the tank carpark and then decided that the big one at the bottom was the right one. There were a few black-heads on the beach and I could see Mark Bailey and Ashley (Rosier) watching (probably for Bitterns) from the bridge. A few more people arrived, including Pete Dennis, Dave Hopkins and the Hamlings, and we were all stood by our cars looking at the beach. Very shortly, everybody rushed to look through their scopes and as I was quite a way from them I couldn't hear any directions so I scanned the sea and beach and there it was - a superb adult-winter Ross's Gull - phenomenal!  It was with about 7/8 Black-headed Gulls that I'd kept looking at and had obviously just joined them. It was watched very well for at least 40 minutes, probably more. It was seen well in flight also. At first it was disturbed by a dog-walker and flew up the beach. It then came back to where it was originally. Later it flew out to sea and settled on the water for a while. Later again it flew on to the Ley where it gave more good views. A couple times it flew over the hillside with other gulls and perhaps landed in the fields before returning to the Ley.
After we were satisfied with our views Pete Dennis and I went to the tank carpark, to the hide, where we met  with Dave Hopkins, Brian (Heasman), Ashley and Mark Bailey. Whilst scanning through the various wildfowl, at around 9am, I spotted what I initially thought was a juvenile Herring Gull flying over the reeds on the far side of the Ley. I very soon realised it was too dark and uniform-brown and shouted "Bittern"! Mark and Ashley got on it before it dropped into the reeds close to the hide on the opposite side. We kept watching to see if it would reappear and after about 10-15 minutes some people went into the hide and we all watched to see if it would flush. It did and I had better scope views. Everyone else got on it too and were very happy. It leapt out of the reeds with legs dangling and flapped lazily over the reed tops into the inlet area. After Ashley and Pete had had quite a heated argument over the Audoin's Gull saga Pete and I left to go to Beesands to try for white-winged gulls. We had a brief look at the sea and had a superb  view of a Great Northern Diver close offshore, eating a crab. I forgot to mention that from the central carpark earlier on I had good views of a pair of Velvet Scoters, not too far offshore. Occasionally flapping their wings to show off their white secondaries. It was too hard to work out whether they were male or female but I reckon there was an immature male and a female. Velvets have very characteristic head-shapes (almost Eider-like). There was also a sizeable flock of Common Scoter offshore and one or two Razorbills. Also there were three female and a male Scaup on the near side of the Ley, at times swimming close to the Ross's Gull. Anyway, there wasn't much at Beesands - just 1 adult male, 1 immature male and, I think, 3 female Scaup, and a few Shovelers. The weather was beginning to get nasty so we went back to the central carpark but the Ross's Gull had disappeared up the beach. I decided to go by myself around to Ireland Bay. The highlight there was undoubtedly a winter-plumaged Red-necked Grebe - very nice. I also had good views of a Water Rail before the bridge, running like a chicken around the back of some reeds and marsh before disappearing. Also a good sighting. Earlier on, before the rain started, Cetti's Warblers were being very vocal. Probably 60-70 people at least turned up throughout the morning. There will no doubt be more throughout the day. 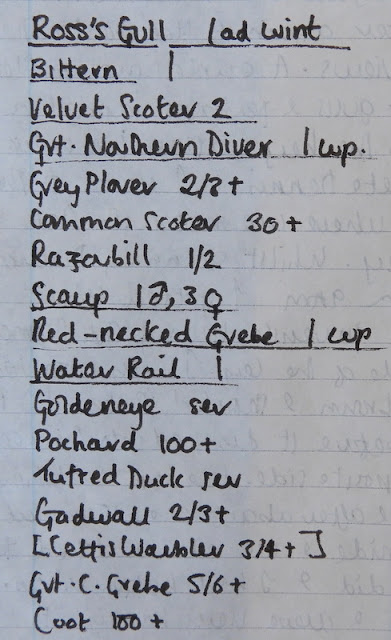 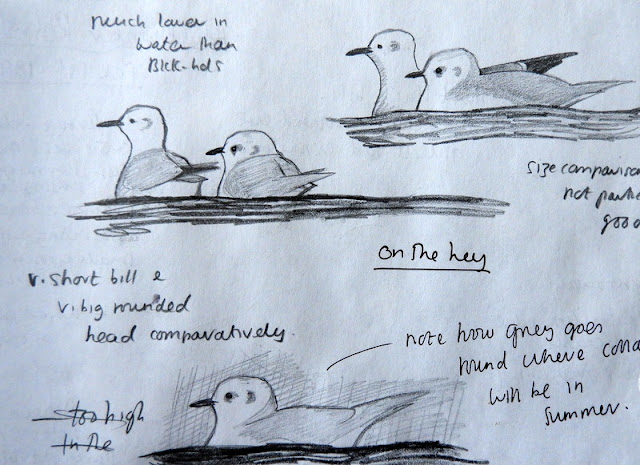 The second bird I saw was quite possibly the returning 1995 bird. It was on the Plym. I twitched it with Kev Rylands on March 17th 1996.


Account for 17/3/96 - I spent much of this morning chatting to Tom Whiley. He did a superb sketch of the Black Redstart (on Newton Abbot Racecourse) in no time at all. I had stunning views of a Water Rail in the copse area. It messed about with a fat fish for several minutes before it finally gobbled it down. It was very brash, seemingly oblivious to my presence 15-20 yards away. I went back for lunch and at about 245'ish decided to go down to Plymouth for the Ross's. Apparently it was present at midday, down the south-east end of the estuary, and flew upriver with the rising tide.
I thought there might be a chance of getting it at the north end on the high tide so I phoned Kev and picked him up straight away. We hammered down there only to find the tide right up and no gulls present. Worse still, it started to rain. A birder was at the lay-by and he'd been to Cattedown without success. Kev and I decided to try Cattedown anyway because apparently there were more gulls down there. Unfamiliar with the area, we followed the signs and found ourselves driving towards a dead-end by the dockside. Kev spotted a couple birders so we parked up and casually asked if there had been any sign. Amazingly it was on the river, sat on a big drum, facing away from us. It was a tick for Kev and I was very pleased with the sighting too. I think this is Devon's third.
After a while it flew to the right on to a jetty, again with its back to us. Later still, it flew further away and landed with some Black-headed Gulls on a sloping boat launch/runway. It was easy to pick out even at a distance, being very much smaller with an incredibly low carriage and long primaries. By now the three birders who were originally there had gone and two more had arrived. It was odd to be watching such a rarity with so few birders present. It took off with the gulls later on and landed back on the jetty. It was raining hard by now so we left to find Lipson Vale paying fields. After getting a bit lost we found them and from the car I spotted the Ring-billed Gull on the goal posts - a classic adult summer-plumaged bird sporting a red eye-ring and narrowly-banded bill - yet another 'ringer'.
Just before it was almost dark (due to black clouds) we tried for the Kumlien's back at a site in Cattedown but had no success. 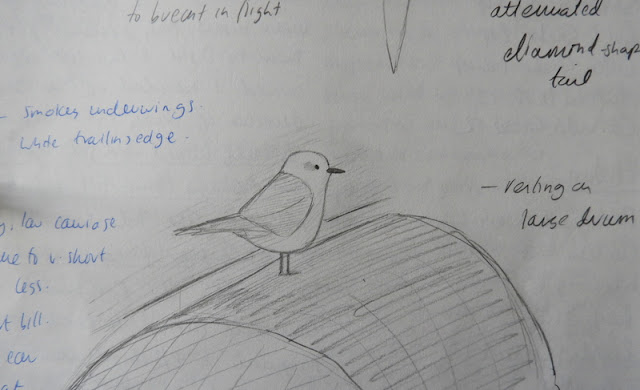 Notes on the 1996 Plymouth bird - a poor effort, probably due to the distant views but no doubt partly due to the fact that I'd seen and sketched the 1995 bird.
The third Ross's Gull was another Plymouth bird. I had fabulous views of it on the Saltram tidal pool on February 18th 2002. Lu was working in Plympton, for ITV Westcountry at the time, so it was nice to be able to meet her for lunch between spells of 'gulling'.
Account for 18/2/02 - Today, Monday, is the first day of the half-term holidays so I went down to Plymouth early, leaving before Lu. I had planned to go to Wembury first but as I drove over the river I noted a sizeable flock of Gulls on the Blaxton Meadow pool. The Ross's Gull was seen near Lipson Vale yesterday so I thought I'd try the meadow which was initially the Ross's Gull's favourite spot when it turned up. Almost immediately, on arrival at Blaxton Meadow, I picked the Ross's Gull up and so phoned it in and sketched it. It was always just sat on the water with Black-headed Gulls but it did drift closer not long before I left. It is a stunning bird though not as pink as I was expecting. I suppose the bright light muted the pink down a little. I never did see it fly or get out of the water, but was more than pleased with the views. Hungry and needing the loo I walked back to Sainsburys, before trying the tip while the tide was still high. I didn't give the tip long because the gulls were a little distant and I was getting cold, despite multiple layers! Just before I crossed the Laira Bridge I turned right, towards the recycling centre, and drove to the end of the road before parking and walking pretty much the rest of the length of the river, north to Blaxton Meadow. Huge numbers of Herring Gulls concealed nothing more than the Iceland Gull but it was nice to see and I managed another sketch.
At 1pm I picked Lu up from work and we had a baked potato lunch at the Treby Arms in Sparkwell. I dropped her back off at 150pm and birded the Plym from the roadside 'til mid-afternoon when it became apparent that there was little gull movement, despite impressive gatherings of Herring Gulls at various points along the river. I only managed the Iceland Gull again thanks to an older birder who pointed it out, sleeping on the mud on the opposite side, in front of Chelson Meadow. 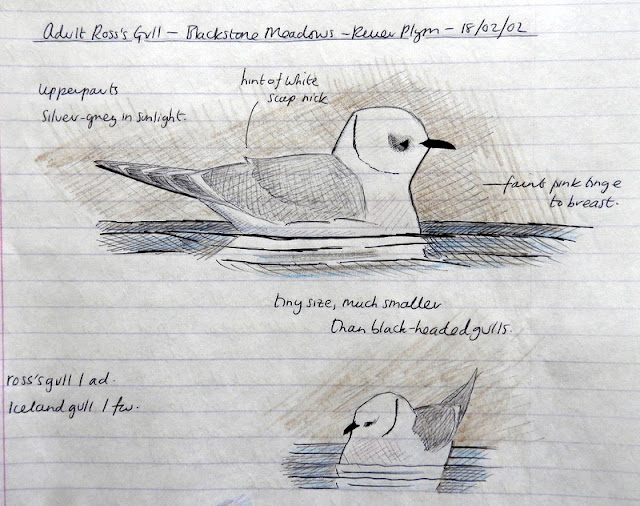 Notes on the 2002 bird.
My fourth Ross's was a first-summer bird that was on Bowling Green Marsh from May 21st to August 2nd 2014 (Devon Bird Report 2014). I saw it on Bowling Green on May 29th and again in Exmouth on June 10th when it rested on Cockle Sands and was duly scoped from the back garden, along with a first-summer Bonaparte's Gull. Its long stay over the summer ensured lots of people saw it.
If I remember rightly that there was a suspicion that it had succumbed to a predator in early August as it was in a state of heavy moult and unlikely to have been able to fly very far. 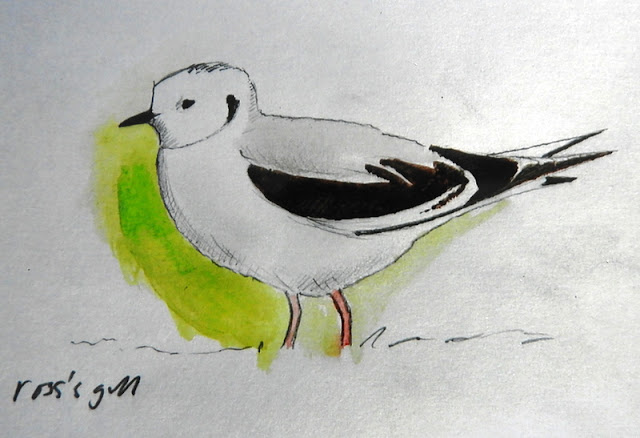 Notes on the 2014 Bowling Green bird. 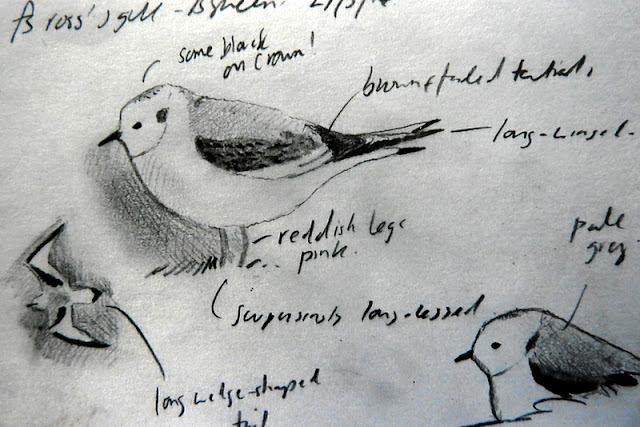 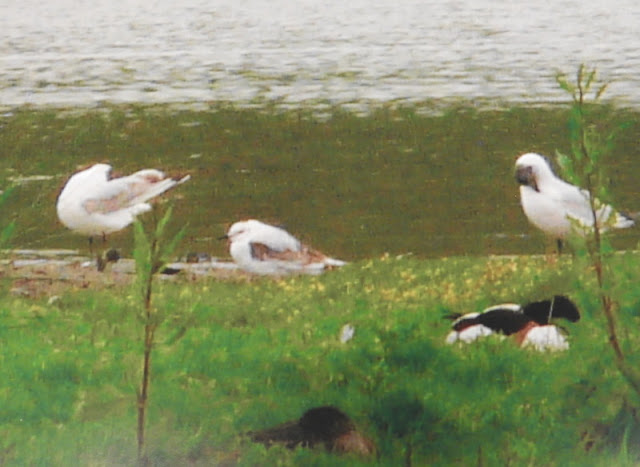 
The fifth of the five was of course the recent Plymouth bird that was originally discovered on South Huish Marsh on March 9th 2020. I believe it was last seen on March 15th. It's amazing how the Plym has once again attracted this High Arctic-breeding beauty. 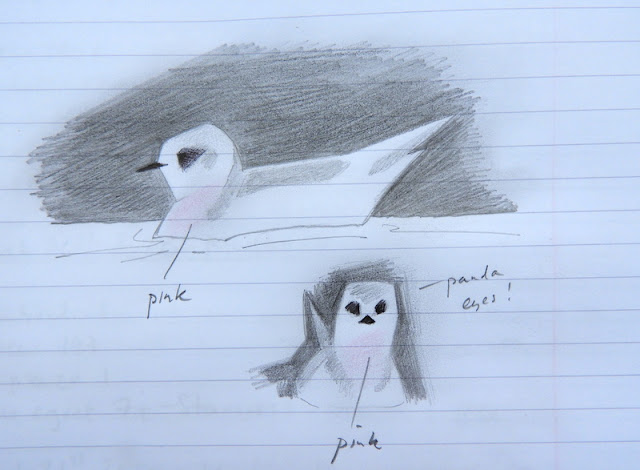 Neat copy of field notes. I know, I can't believe I sketched it either! 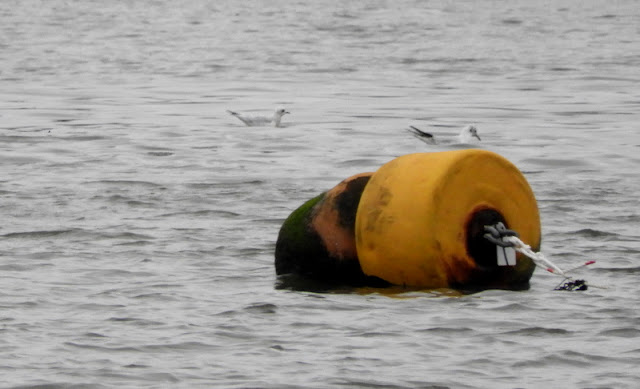 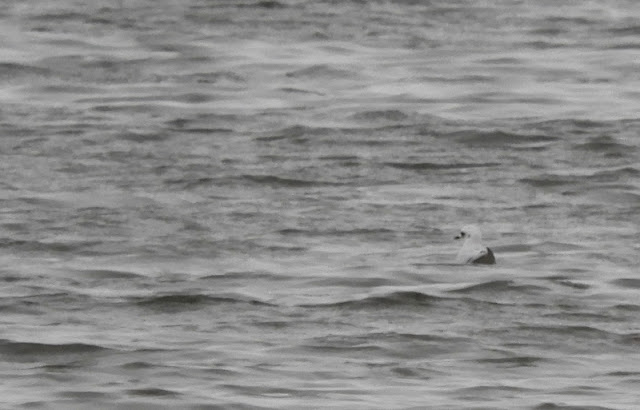