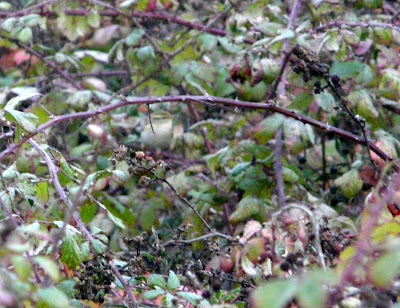 Yellow-browed Warbler blur - below Foxholes.
I got out at dawn and again this afternoon. The birding was remarkably good considering the cold and overcast conditions. As I got out of the car, along the seafront below Foxholes, a Yellow-browed Warbler started calling. I soon had good views as it edged out of the sallows and into some bramble right in front of me. In keeping with tradition I only managed a terrible photo of it before it flicked back into cover. I soon picked up a 'fee' calling Siberian Chiffchaff as it too ventured into the low bramble scrub, and at least 3 Chiffchaffs (probably at least double that) followed suit. Also present were 1 Firecrest, 1 Goldcrest and 2 Bullfinches. A great little spot that I rarely check. Viewing the scrub is easy enough but it gets quite busy along that stretch so it kind of puts me off.
Offshore there was at least 1 Great Northern Diver and c40+ Common Scoter. Mid-afternoon I had distant views of the 2 Velvet Scoters and there was a Purple Sandpiper on Maer Rocks, along with a Little Egret and 4 Brent Geese.
Off Mudbank were 105+ Pintail, a female Gadwall, 3 Goldeneye and 40 Redshank.
Finally, a quick look off Shelly Beach revealed the adult Bonaparte's Gull, 4+ Red-breasted Mergansers and a Greenshank. A female-type Black Redstart was mobile around the apartments, always keeping one step ahead of me. 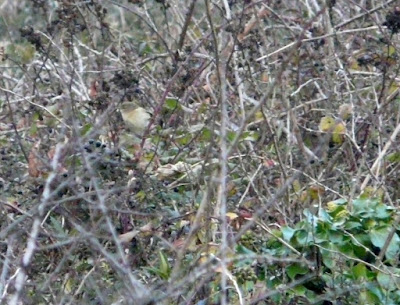 Another dreadful shot. This Siberian Chiffchaff was classic plumage-wise and it gave the short piping 'fee' that typifies tristis. 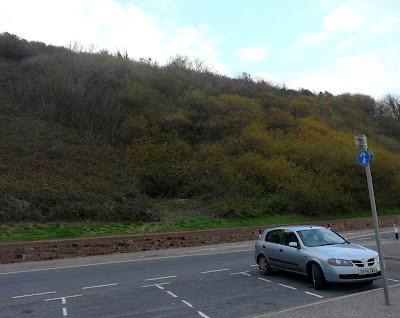 This area of scrub, situated just below Foxholes, was remarkably productive this morning. I'd look at it more often but you have to contend with the noise of the waves behind you and a near enough constant procession of cars to and fro. It sits well within the Orcombe patch boundary and surely warrants more regular checking!