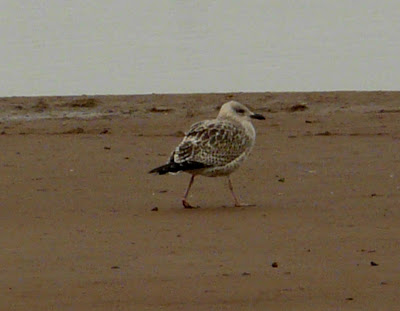 Presumed juvenile 'Scandanavian' Herring Gull (argentatus) - one of two present off Mudbank this morning. Despite the poor quality of the photo - note the retained juvenile mantle and scapular feathers. Our local (argenteus) Herring Gulls should have moulted these by now, showing grey first-winter feathers with prominent bars or similar markings. The rest of the plumage seemed fresh too - well marked tertials and pale tips to primaries.
Eight Eiders (all females and young or eclipse drakes) distantly off Mudbank (between Cockwood and Starcross) were a surprise this morning. I've only ever had one off there before - a drake a couple of years ago that snuck on to my house list. No sign of the Scaup today though, despite it still being present yesterday. Also off Mudbank today - 2 presumed juvenile Scandanavian Herring Gulls, 11 Teal, 1 Greenshank, 22 Ringed Plover, c150+ Dunlin, 65 Shelduck, 2 Great Crested Grebes, 2 Red-breasted Mergansers and a handful of Curlew, Turnstones, Redshank, Wigeon, Pintail and Brent Geese. An odd-calling Chiffchaff is still knocking around the bramble patch there.
Earlier, a 25 minute sea-watch from the raised beach huts produced a steady stream of distant auks and Gannets, as well as 11+ Red-throated Divers, 1 Great Northern Diver and 4 diver sp. On Maer Rocks there were 65 Brent Geese and at least 1 Purple Sandpiper. Early Yesterday morning there were at least 9 Purple Sandpipers on Maer Rocks along with at least 8 Turnstones. 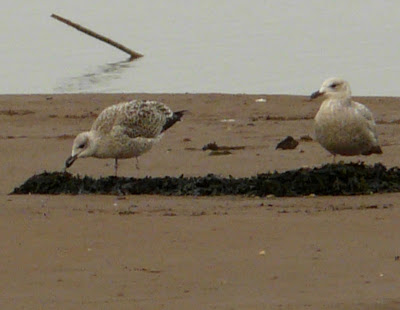 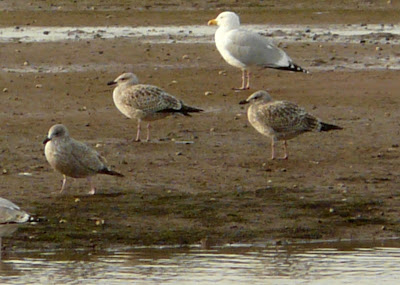 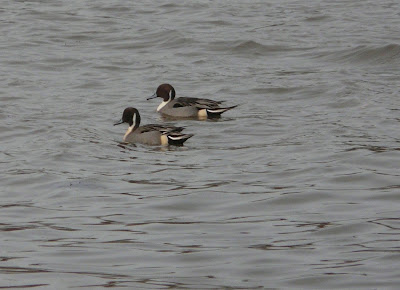