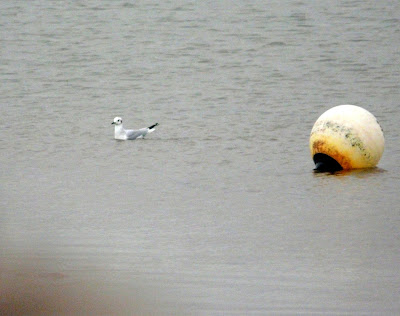 Bonaparte's Gull - I very nearly overlooked this bird as Lu and I were walking the dog off Shelly Beach late this afternoon. Unfortunately it very quickly took off and flew towards the Warren.
It was good to catch up with two Velvet Scoters off the seafront this afternoon. They were feeding fairly close to the main throng of c100+ Common Scoters. Both female-type birds and always pretty distant, but never an easy species to see in Exmouth. Five Brent Geese and a Purple Sandpiper were on Maer Rocks and there seemed to be a number of auks bombing around out in the bay.
Off Mudbank there were at least 120 Pintail along with 11 distant Bar-tailed Godwits, a Goldeneye, Greenshank and a Peregrine.
A Little Grebe looks set to winter in the marina and the Bonaparte's Gull was off Shelly Beach.
On the 30/11 the female-type Scaup was still off Mudbank and I discovered a Water Rail in a wet bit of woodland just up from West Lodge, along the as yet unopened stretch of cycle path. A Jay was in the same area.
Late yesterday afternoon, 2 Mistle Thrushes and 3 Redwing were behind or house on Warren View playing fields. At least 4 Song Thrushes are also present along with several Blackbirds, but I've only managed to see one Chiffchaff down there this week. 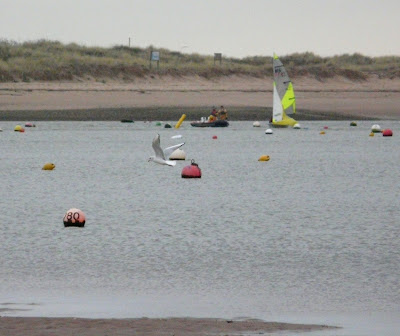 The Bonaparte's Gull heading towards the Warren. 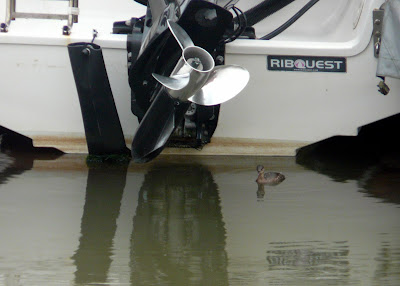 The marina remains the only reliable place to see Little Grebe in Exmouth.
Posted by matt knott at 09:33