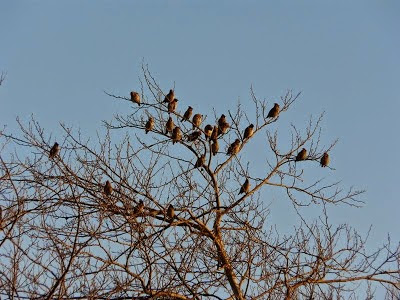 Twenty-six Waxwings - Exmouth train station 18/12/2010.
The current Cattle Egret influx has got me thinking about some of the other recent influxes of scarce species, and reflecting on how my missions to increase my self-found list have been met with success and failure. I think it's pretty obvious that if you want to boost your self-found list you have to be prepared to put in a bit of leg-work and do a bit of tactical thinking. Of course time is a big factor too and these days I don't have the hours to put in to protracted searches. I'm happier using the limited time I have in the field to check the sites on my doorstep.
The 2010 Waxwing invasion will live long in the memory. The first birds reached Devon on November 10th (Devon Bird Report 2010) and from then onwards I was a man possessed. I scoured every housing estate, retail park, cul-de-sac and shop carpark for all the likely berry-bearing shrubs in Exmouth. I systematically checked them all on a daily basis - jumping in the car after work and driving around with a feeling of absolute conviction that eventually I would strike lucky. Lu would shoot me a pitying look as I explained I was off again to look at the berry bushes.
On the 18th I was going around the roundabout by Exmouth train station, to check a couple trees outside the entrance to the leisure centre, when a blur of pink and yellow skimmed just inches over the bonnet of the car - a Waxwing flock ploughing into two of the target rowans! Minutes later and my first ever self-found Waxwings, a flock of 26, were in my scope. Magic!
My next flock, 12 birds (rising to 19), was picked up in a far more relaxed fashion. I found them sitting way up in a poplar, trilling for me as I walked out of the school gate. November 27th 2012. Zero effort that time and it got me wondering if sometimes it's best to not go too overboard with searching!
As someone who is keen on finding their own birds, influxes of rare or scarce species into the county provide an exciting challenge. I've had a mixture of good and bad luck over the years but, without question, the failures far outnumber the successes. In 2005, the previous big Waxwing year, I put a lot of effort in but it was all for nothing. If felt as if every other birder in the county was finding their own. It was immensely frustrating but I knew I'd get another chance one day.
I was similarly disappointed at the end of the same year when the UK witnessed an unprecedented influx of Laughing and Franklins Gulls. I absolutely slogged it, hitting multiple sites. I got utterly soaked down at Hope's Nose only to watch a likely looking dark-backed gull disappear into the murk, through misted binoculars. I sat at Starcross until dark on several occasions, watching thousands of gulls stream downriver to roost, until my eyes hurt. I felt I'd done everything I possibly could but had my hopes dashed when Ivan dug one out right under my nose - off Mudbank in Exmouth. At that point it felt as if it just wasn't meant to be. That feeling of inevitability when the team you support has dozens of shots on goal but just can't find the back of the net.
By the end of 2005 I knew I'd missed my best ever chance to find a Laughing Gull. It was quite honestly painful. Fast forward just over a year however and the tale takes a happy twist with a touch of irony. On January 13th 2007 I found a first-winter Laughing Gull on the river Teign - my old stomping ground. It was one of only five recorded in Britain that year (British Birds - volume 101).
My other successes targeting species during influxes include Cattle Egrets, Rose-coloured Starling, Aquatic Warbler and Night Heron. Less rare species such as Yellow-browed Warblers, Glaucous and Iceland Gulls have also been successfully targeted, but I lucked out with the Honey Buzzard invasion of 2000 and have had no success with the likes of Glossy Ibis or Pallas's Warbler. 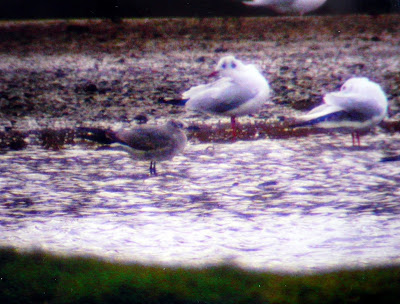 Laughing Gull - Teign estuary - 13/1/2007. There are far better photos of this bird but this one was taken shortly after I found it. It evokes very happy memories because I'd tried really hard to find one in the 2005 influx. I coincidentally relocated the same bird Exmouth in February and it went on to hang around the Exe until December. It was highly mobile, ranging as far as Exeter to the north and Seaton to the east. 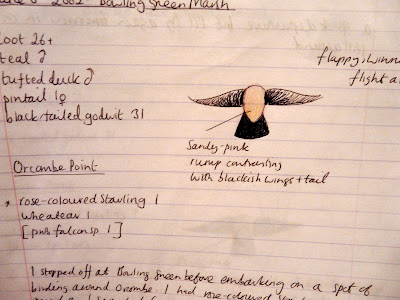 In 2002 there was an influx of 15 Rose-coloured Starlings in Devon (Devon Bird Report 2002). I was desperate to find one and checked all the likely local spots in Exmouth and near where we lived at the time in Exeter - parks, cricket pitches etc. I eventually flushed one from a scraggy shrub on Orcombe Point. It showed well, albeit briefly, in flight early in the morning on June 6th. There hasn't been another invasion like that since and I've yet to find a juvenile Rosy. Surely long overdue in Exmouth considering the number they've had on the Warren. 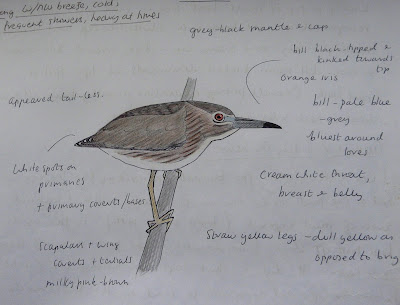 On April 12th 1999 I set off from Exeter with the express intention of looking for a Night Heron. Never has one of my plans been so quickly and successfully executed! Several had turned up along the south coast, from Kent to the Scillies, but none yet in Devon. My first stop was the now 'filled-in' Newcross Pond in Kingsteignton. I then checked Hackney Marshes on the river Teign, then Coombe Cellars before I moved on to the Warren to check the Greenland Lake area. I then went and looked at a 'sinensis' Cormorant at Trews Weir before grabbing a bite to eat and heading to Countess Wear. I couldn't believe my eyes when, within the water treatment works, this first-summer bird burst from cover. After disappearing for a while it flew up into a small tree and I was able to complete the above field sketch. It stayed until May 26th, sometimes flying as far as Exminster Marshes. 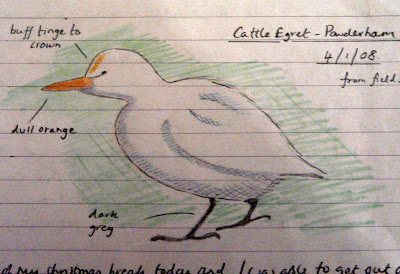 I twitched this Cattle Egret on January 4th 2008 before finding 2 in Exmouth a couple of weeks later.  I'd simply been targeting livestock fields in Exmouth. If you bird a marshy area with livestock nearby you've got to be in with a decent chance this winter. Birds have already been seen at Teigngrace and Prawle and Steve Waite has just unearthed one on the Axe. There have to be more around.
Posted by matt knott at 10:11