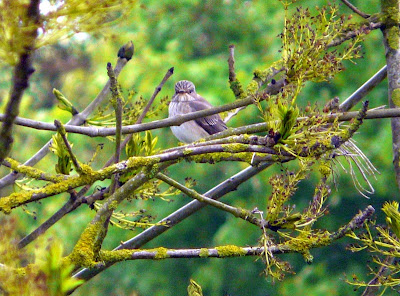 A magical spell of post-work birding this evening. With the family all doing different things I snuck out and had a stroll around the top fields, before doing a sea-watch from the raised beach huts. Totals recorded included c30+ sandwich tern, 1 little tern, 1 common tern, 2 roseate tern, 3 wheatear, 1 male whinchat, my first spotted flycatcher of the spring, 7 swallow, 6 swift, 34 whimbrel and c70+ dunlin 'in-off'', 7+ manx shearwater, 1 little egret, 2 great crested grebe, 1 black-headed gull, 1 fs mediterranean gull and a really good passage of hirundines and auks out over the sea. A real sense that birds were on the move this evening!
Best of all though was a pale-phase pomarine skua that was spending long periods sat on the water between bouts of 'kittiwake attacks'. It had fairly decent 'spoons' but I've seen better. I don't think I've ever had such good and prolonged views of one attacking kitts though. It was still there when I left at 7pm so there's a chance it'll be there in the morning.
Posted by matt knott at 12:02