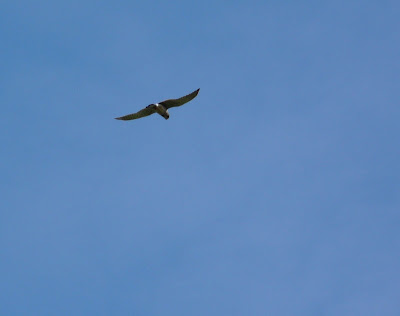 A rare sight in Exmouth these days - a Kestrel hovers over the top fields yesterday, attracted by new-cut silage, from outside the patch.


Thanks to some top 'gen' from good friend Terry Smith, I managed to add nightjar to the old Exmouth list on Sunday night. Amazing views of a male bird at dusk put me in a really good mood for the week.
Otherwise it has been quite quiet in Exmouth on the bird front, but my third singing male lesser whitethroat of the spring was found early this morning in the boundary hedge between Sandy Bay and Orcombe. Otherwise the only other migrants noted were 1 smart male 'Greenland' wheatear, 7 house martin, 2 swift, 2+ whimbrel and 3 great northern diver, two of which were picked up by the whistling of their wings as they shot really low over my head first thing this morning. All three gained a lot of height and looked like they were going to fly straight up the Exe.
The other notable sighting today was a decent flock of about 90 sanderling, presumably new in, on a sandbar off the seafront.
Yesterday the most notable sighting was a kestrel on Orcombe Point, no doubt tempted in by the newly-cut silage fields. I'm guessing grass cutting does quite a bit of damage to rodents. Kestrels were a regular sight in the Orcombe/Sandy Bay area until recently, but they have been conspicuous by their absence this year. Let's hope yesterday's bird hasn't flown too far from 'off-patch'. Also logged yesterday were 3 wheatear, 45+ sandwich tern, 1 little tern and 3 whimbrel. 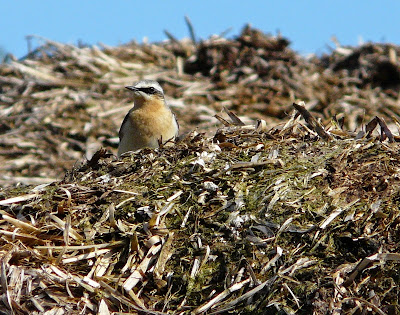 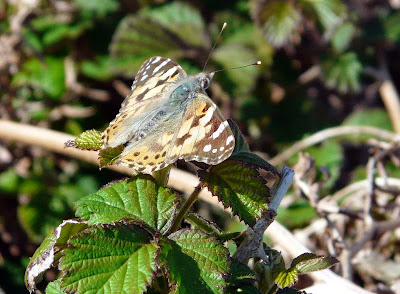 One of two Painted Ladies seen this afternoon. 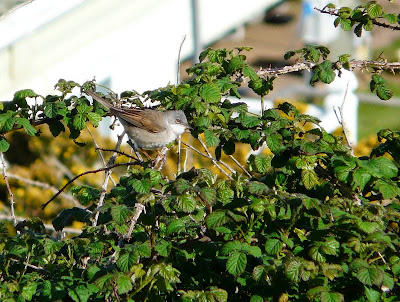 There are a lot of singing male Whitethroats on Orcombe at the moment. Any area of suitable habitat seems to hold birds.
Posted by matt knott at 11:39