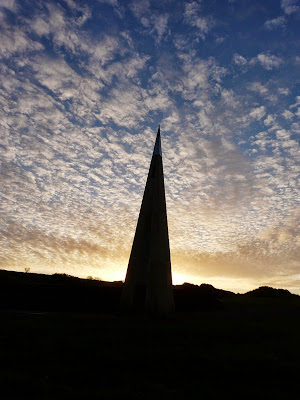 Geoneedle.
This morning's 3 great northern divers that flew past Orcombe Point took my spring tally to 111 birds. I don't do that much sea-watching so I wouldn't like to hazard a guess as to just how many birds have flown out of Lyme Bay in the past few weeks. I also had a probable black-throated diver flying south distantly. It wasn't a great northern and it wasn't a red-throated but I don't like identifying birds by default, so it has to remain as just a 'probable'. The best bird this morning however wasn't a diver but a skua. A pale phase pomarine skua was picked up a long way offshore at 0635 before beating its way purposefully into the bay to show off its 'spoons'. It remained off the lifeboat station, harassing kittiwakes, until at least 0655 when I had to leave to go to work. It was a bit unexpected given the rather benign weather conditions.
Also off there this morning were 6 small wader sp, just 2 sandwich tern and 3 great crested grebe.
Yesterday I recorded 1 great northern diver, 3 great crested grebe, 1 wheatear, 2 sandwich tern and 2 sanderling.
On 19/5 I logged 21 great northern diver, 6 sandwich tern, c30+ kittiwake, 4 fulmar, 8 wader sp and 1 probable hobby distantly offshore. On 20/5 there was a pair of wigeon in the estuary early morning, and a couple of dog-walks on the common this week produced tremendous views of both dartford warbler and hobby.
Posted by matt knott at 09:56