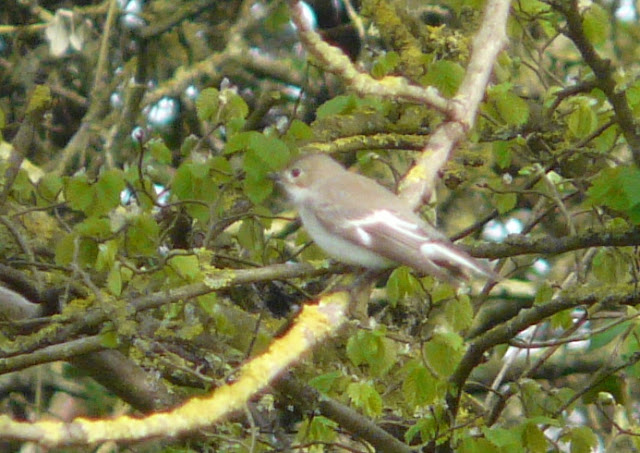 It's been a bit of a long and torturous journey but I found out this afternoon that the BBRC has accepted this Collared Flycatcher. It was discovered late in the afternoon on April 20th 2016, on Orcombe Point, in a small triangular-shaped copse that I rarely check, following fierce, gale-force easterly winds. It's the first record for Devon and the earliest in the UK by eight days. Its early arrival and  my lack of experience with the species (and its confusion species - chiefly Atlas Flycatcher) prevented me from taking it any further.
Things took a bit of a twist last year when an influx of over 150 Collareds (including several females) occurred in northern Spain in mid April (an occurrence that's been repeated again this year) and a female turned up at Spurn, Yorkshire, in May (which has also recently been accepted), which was arguably not quite as good a candidate as the Orcombe bird.
In May 2019 I contacted Paul French, chairman of the BBRC and author of the ' rarebirdalert' article on the Spurn bird, with the photos. His reaction was "it looks like a classic Collared Flycatcher" but he cautioned with the need to rule out Atlas Flycatcher, especially as its upper-tail coverts were distinctly blackish (though perfectly within range of variation of Collared Fly). He encouraged me to submit it regardless, though suggested I waited until new research on Atlas and Iberian Flycatchers was published.
Being incredibly impatient I set about contacting birders with experience of both Atlas Pied Flycatcher and Iberian Pied Flycatcher. Both Andrea Corso and José Luis Copete (both of whom have researched and published literature on  Atlas Pied)  were contacted, and were fantastically helpful (and both pro-Collared Flycatcher). I also contacted Roger Riddington and Stephen Menzie of the BBRC, who were both extremely helpful and encouraging.
I put together a pretty large and comprehensive BBRC submission, including all the e-mail feedback from Andrea and José, and all  my photos, and crossed my fingers!
If I'd known more about Collared Flycatcher back then I'd have broadcast the news on finding it. Unfortunately I was, and still am, woefully inexperienced in the 'ficedula' department so I stuck the photos on the blog entitled 'Interesting Flycatcher' (mindful of the difficulty in identifying female Collared Fly) and left it at that. On seeing the photos Mark Bailey, Terry Smith and Brian Heasman rushed over to see it, but Brian had to leave (his daughter's car had caught fire!) before Terry and Mark relocated it, by now late in the evening. It was gone the next day.
Collared Flycatcher seems to be getting more and more regular in the UK. Indeed it's no longer considered the 'mega' it once was. A male was seen on the Faroe Islands on 25/4 this year and, as I mentioned earlier, there was another big mid-April influx in to Spain this year. It looks like its status as a vagrant is changing pretty fast, presumably as a result of  changing climate, so its got to be worth checking all future female 'Pied' Flys very carefully. 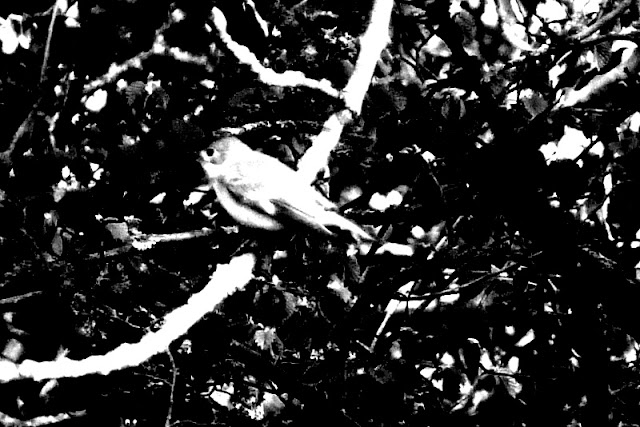 I sent this to the BBRC only recently and asked it to be included with the existing file. Adjusting the contrast in black and white in 'Picasa' reveals an obvious collar and pattern that perfectly mirrors that of a male Collared Flycatcher. A happy accident on my part but supportive of Collared Flycatcher. 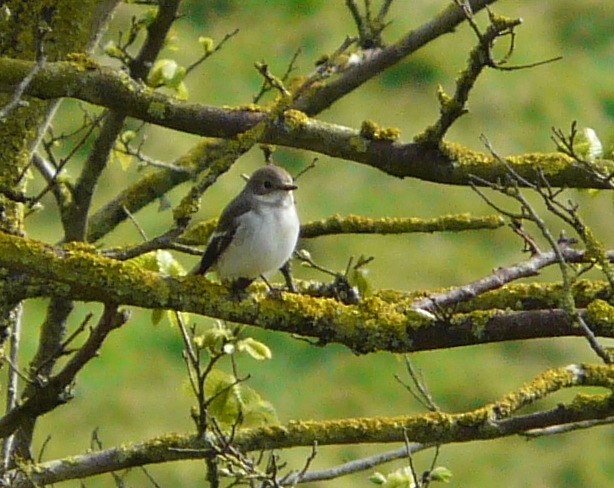 Chief identification point is the large white patch at the base of the primaries. On Pied Fly it's often absent or rarely extends beyond p6, whereas on this bird it clearly reaches p4 and there's even an apparent small spot on p3. To put it simply, the white extends close to the wing edge and well beyond the primary coverts. This rules out Pied but not Atlas, although the white patch on this bird is way more extensive than on the majority of Atlas. Additionally this is a very grey-looking bird, lacking the browner tones of Pied. Atlas can look grey but perhaps not as pale as this bird, and of course Atlas doesn't show a collar. This bird also shows a whitish-grey rump, white in tail feather t4 (as well as extensive white in t6 and t5) and brilliant white underparts (often more sullied in Pied).
It's perhaps worth pointing out that Atlas Pied Fly (which hasn't yet been recorded in the UK) doesn't typically reach its breeding grounds in north Africa until late April/early May, so is arguably more unlikely to turn up in the UK in the third or fourth week of April than Collared, which does actually breed as far north as southern Sweden. Factor in the strong easterlies too.
From what I've been able to ascertain, female Iberian Pied Fly shows the same amount/extent of white at the base of the primaries as Pied, and it's interesting that Spanish birders were confidently identifying Collared in the recent influxes, suggesting they differ markedly from the local population.
I don't think there's anything on this bird to suggest hybrid parentage, though Pied and Collared are known to hybidise, but as Stephen Menzie said, it would be impossible to fully rule out on any British record.
Then there's the grey form of male Pied Fly to consider, but that shows a different pattern of white in the greater coverts and tertials, and usually exhibits some tell-tale black somewhere in the upperparts. It's unlikely that the primary patch would be so large either.
Finally Semi-collared has to be considered but that shows evenly narrow-edged tertials and of course a second (median covert) wing-bar, along with a different pattern of white at the base of the primaries. 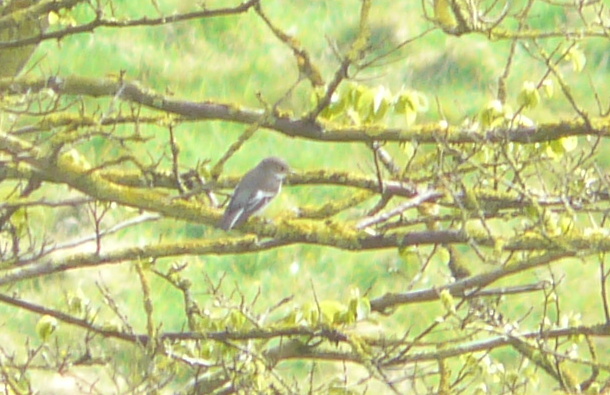 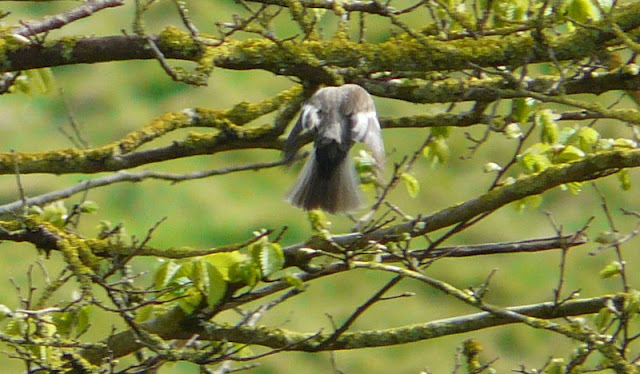 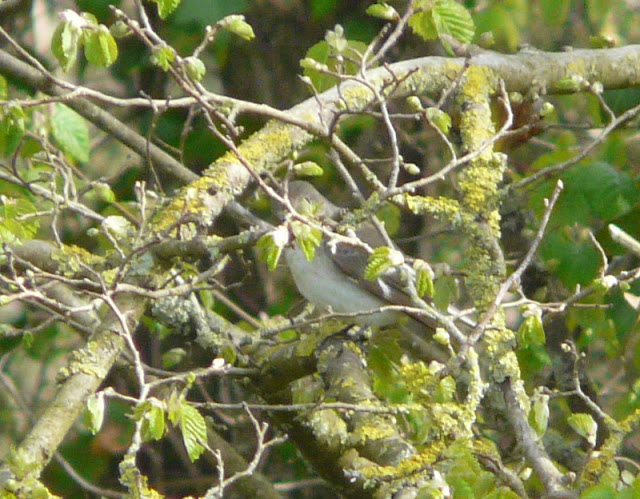 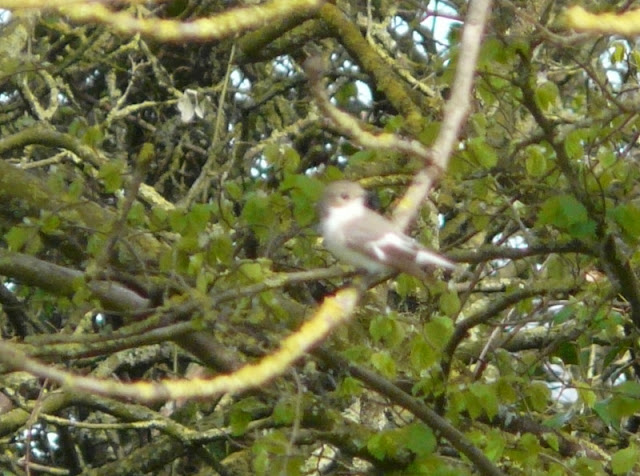 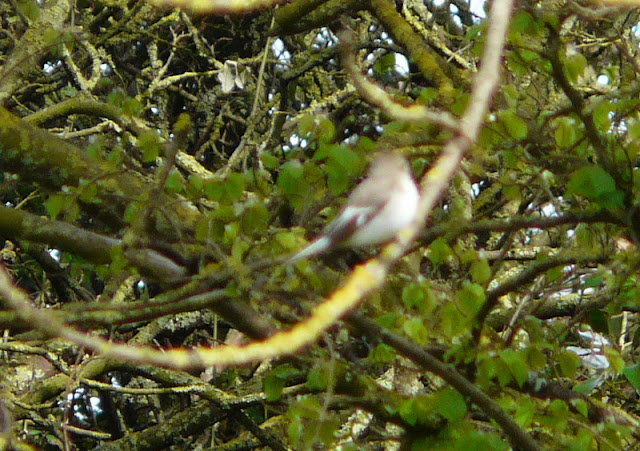 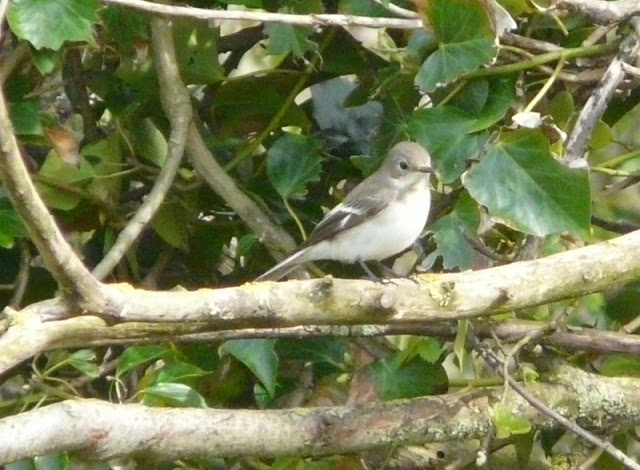 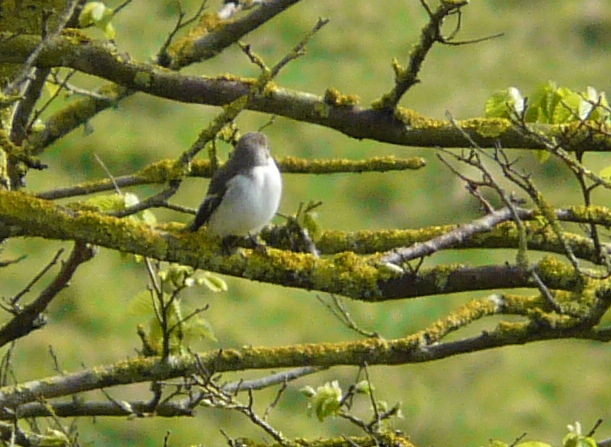 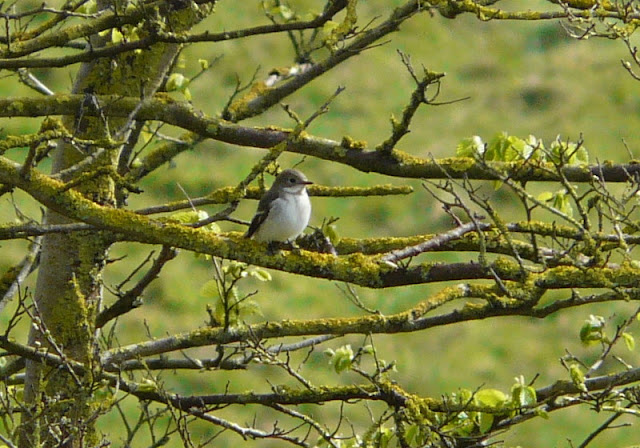 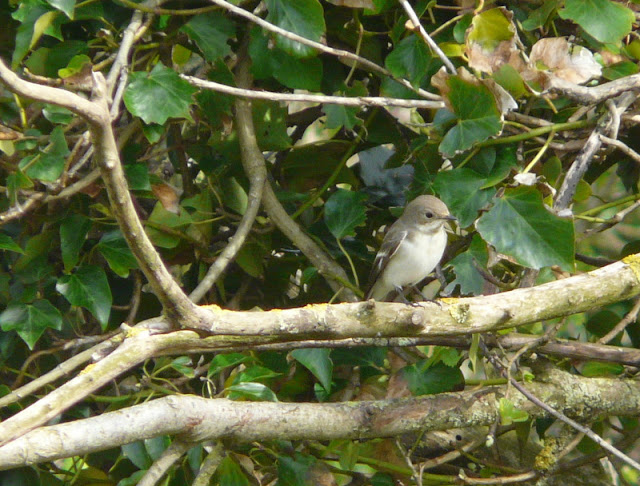 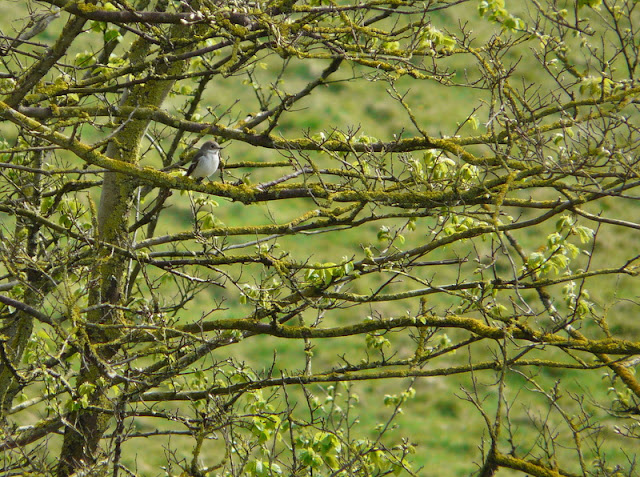 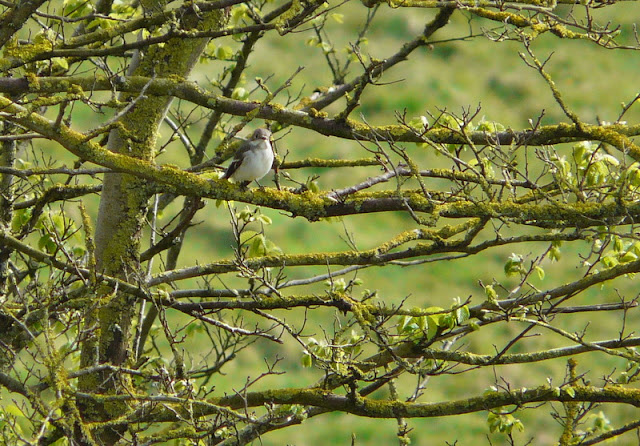 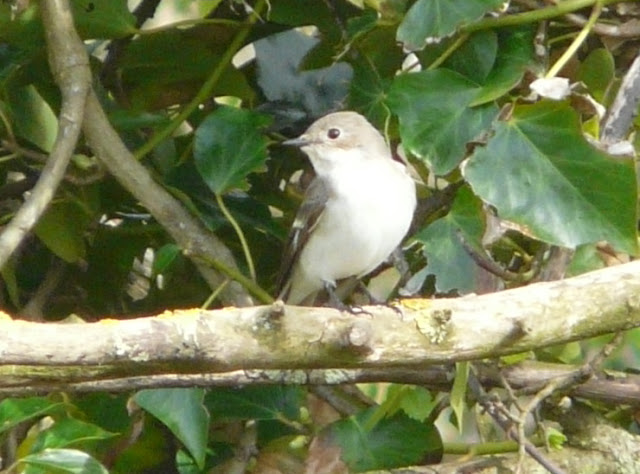 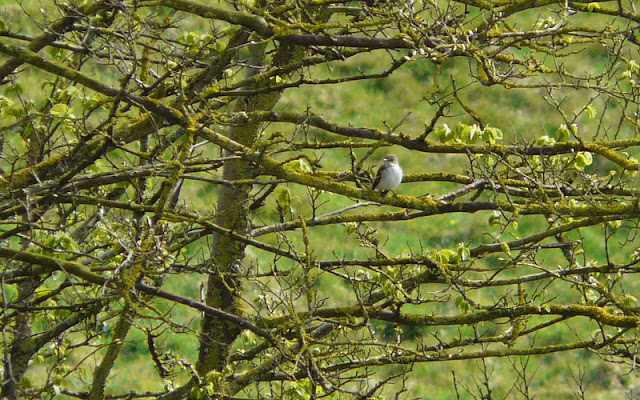 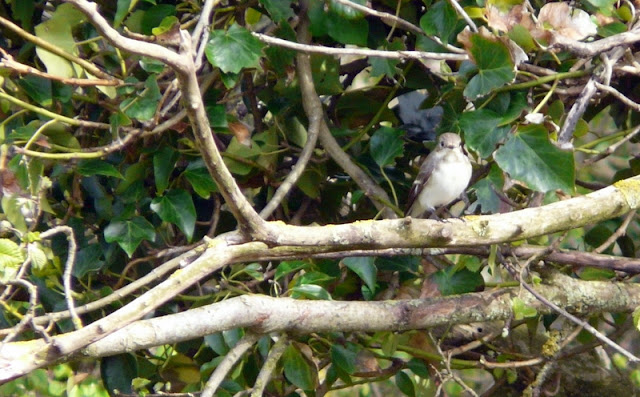 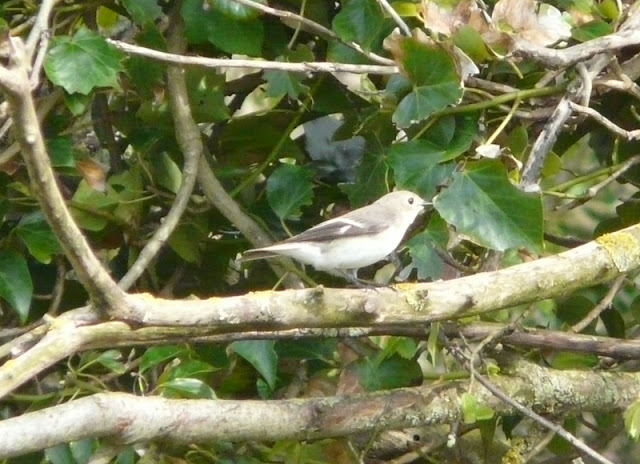