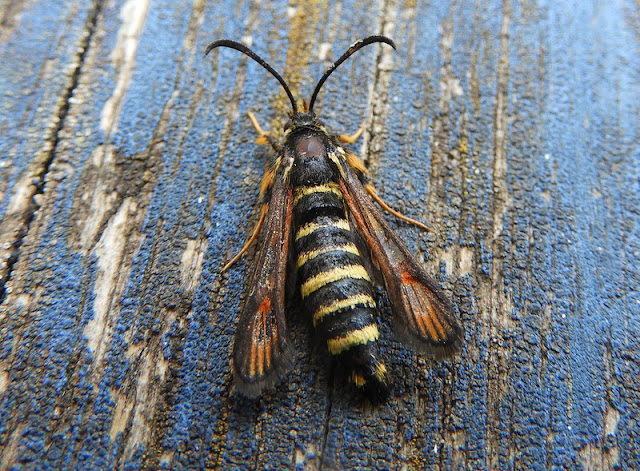 Six-belted Clearwing - at last! I had to withstand stifling midday heat and countless odd looks from passing cyclists, but it was worth it, finally netting this long-awaited little 'wasp-mimic' moth.
An early morning look at Maer Rocks produced several Common Terns, a number of Sandwich Terns, 2 Little Terns and two probable Black terns that remained frustratingly distant off Dawlish. Also noted were 2 Dunlin, 1 Sanderling, 1 Common Scoter, 2 Common Sandpipers, 7 Canada Geese and a few Mediterranean Gulls.
I popped up to Orcombe and recorded my first couple of autumn Tree Pipts and a lone Yellow Wagtail. Only 1 juvenile Willow Warbler was noted but I only covered a small area at the top of Gore Lane. 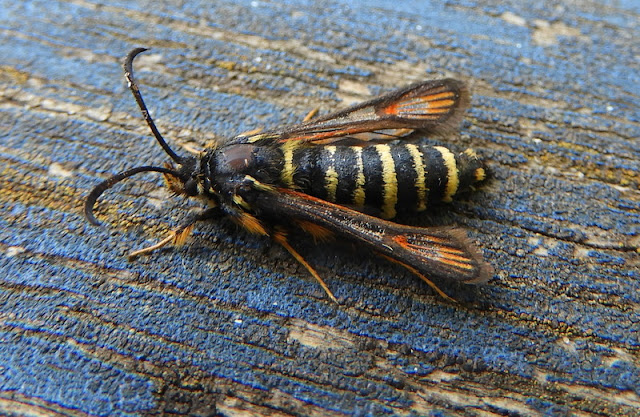 Not a rare species but rarely seen without a pheromone lure. My tactic was to spend hours staring at Bird's-foot Trefoil, which wasn't as unpleasant as it might sound, with a colony of c20+ Common Blue butterflies to look at whilst waiting. I netted and potted this species so that I could photograph it at home. It was released a short while later in the same spot that I caught it, whilst Lu, Maisie and I were walking the dog.
Posted by matt knott at 09:05