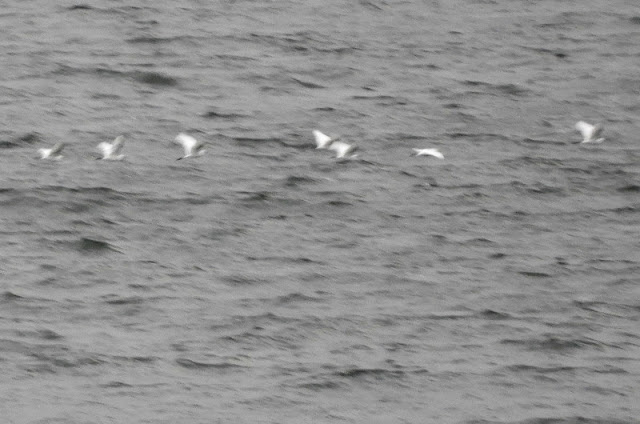 A disastrous attempt to photograph a fast-moving flock of Cattle Egrets, just after they'd rounded Orcombe Point. They headed towards the Warren and then presumably flew upriver. Despite the appalling quality of the photo note the dumpy structure created by a short 'front-end', short broad wings and short black leg/feet projection (click on photo to enlarge).
My only previous Cattle Egret finds in Exmouth were 2 birds in the Courtlands area in 2008, and a single bird in the estuary, off West Lodge, last October.
A brief sea-watch from around 0630 this morning produced way more than I was expecting. Best was a flock of 7 Cattle Egrets but a juvenile Black Tern, 30+ Common Tern, 5 Common Scoter, 7 Balearic Shearwater, 2 Mediterranean Gulls and 6 House Martins were also logged.
Off Mudbank today was 1 first-winter Yellow-legged Gull, 1 Redshank, 1 Greenshank, 5 Turnstone, 3 Whimbrel, c80+ Mallard and a juvenile Peregrine. 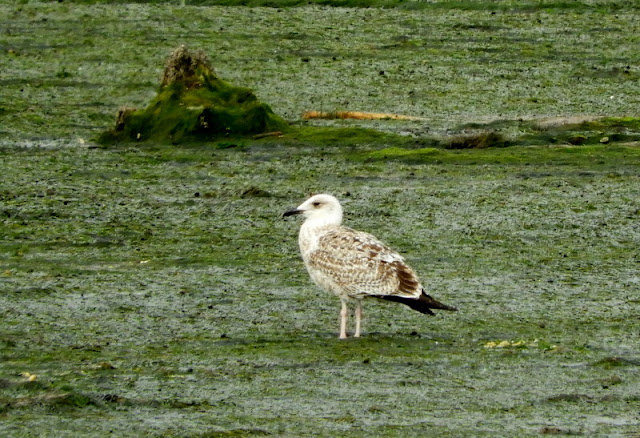 This magnificent first-winter Yellow-legged Gull was too far off for me to get a good photograph. It has replaced nearly all of its mantle and scapular feathers (click on photo to enlarge).
Posted by matt knott at 08:31