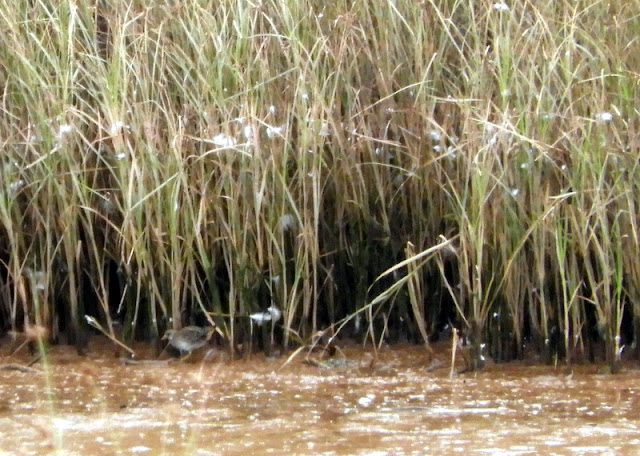 Spotted Crake - Otter estuary - a great find by Chris Townend. Can't ever see me getting one of these in Exmouth. Many thanks Chris. (click on photo to enlarge).
One of the big drawbacks of not year-listing, and rarely twitching, is that you can go years without seeing certain species. Spotted Crake is one of those species, and a quick check of my records revealed that the last one I saw was on August 30th 2005! That one was a South Huish, four days after my son's birthday, 'bagged' whilst  twitching the Thurlestone Least Sandpiper. My only other Spotted Crakes were on Bowling Green on 10/9/04 (and subsequently), my only self-found bird on the river Clyst on 12/8/99 and my first ever - a bird at Titchwell, north Norfolk (on a trip with Kev Rylands) on 13/9/96.
When Chris texted me with the news this morning I jumped straight in the car and headed over. I'm glad I did because the bird showed incredibly well - out of the vegetation rather than in it for the majority of the time I was there. It would have been nice if it was a little closer, but scope views were more than adequate - an absolutely stunning little bird and one that I just don't see enough of.
Exmouth has been exceptionally quiet today. A single Knot off Mudbank was noteworthy but that's about it.
Yesterday the juvenile Black Tern was still off the seafront, and on Orcombe I recorded 2 Wheatear and 2 Yellow Wagtails.
Posted by matt knott at 09:20