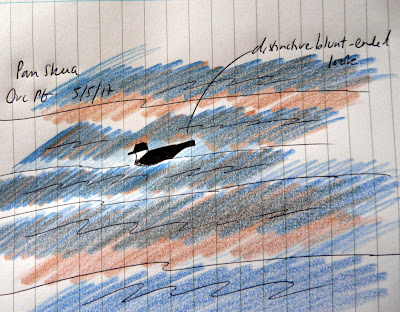 Two short visits to Orcombe again today, pre and post work  - in order of appearance - 8 Whimbrel, 4 Sanderling, 1 Turnstone, 13+ Sandwich Tern, 6 Swift, 1 Dunlin, 1 Grey Plover, 1 Wheatear, 1 Guillemot, 1 Willow Warbler, 1 Great Skua, 4 Manx Shearwater, 1 Pomarine Skua and 1 Whinchat.
The Bonxie was loafing around off Orcombe Point this afternoon, in a strengthening easterly, and the Pom was picked up sat on the sea, viewed from the clifftop by the bench. I watched it for quite some time, hoping it would get up and chase something but there was very little else around for it to chase. Four Manx Shearwaters were the first I've seen this year and Tern numbers remain very low. We've normally had Roseate Tern by now.
A quick look off the Imperial, on the dropping tide, produced a nice selection of waders that included 1 Greenshank, 2+ Bar-tailed Godwit, c40+ Whimbrel, 50+ Dunlin, 6 Ringed Plover, 10 Grey Plover and 2 Knot.
Yesterday, first thing, I picked up my first Garden Warbler of the spring, on Orcombe, and a single Willow warbler. 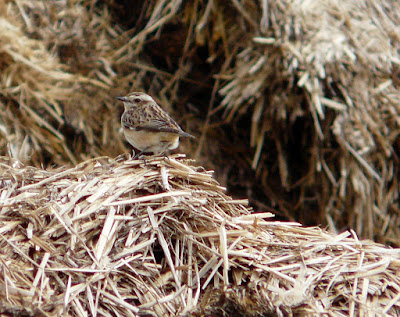 Whinchat - I just love this species and every record on Orcombe is warmly welcomed. This could be my second of the spring but it looks awfully similar to the bird I had a couple days ago!
Posted by matt knott at 10:33