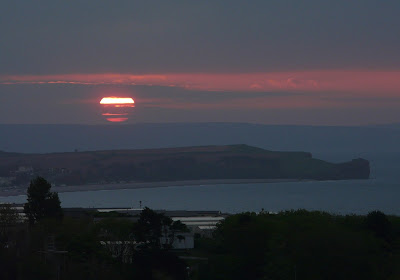 Sunrise looking east towards Otter Head from just above Sandy Bay caravan park -  9/5
A short sea-watch from the lifeboat station after work this afternoon, just after some rain had moved through, produced two surprises in the form of a drake Pintail and a Black-throated Diver. Also recorded were c10+ Sandwich Tern, 1 Great Northern Diver and 2 Great Crested Grebe. The Pintail was sat on the sea near the numbered marker buoys and the Black-throated Diver, a summer-plumaged bird, flew in from the east and landed in the same area, last seen actively feeding and heading towards the Warren.
Wader numbers are pretty low off Mudbank. This evening's count included just c10+ Whimbrel, 3 Bar-tailed Godwit and 1 Dunlin. Two Peregrines (male and female) were sat out in the middle of the estuary.
On Tuesday morning a Yellow Wagtail (presumably Monday's Blue-headed) was on Orcombe Point and a quick check off the seafront produced an Arctic Skua, 4 Swift, 1 Ringed Plover, 2 Great Crested Grebe and c10+ Sandwich Tern.
Posted by matt knott at 11:42