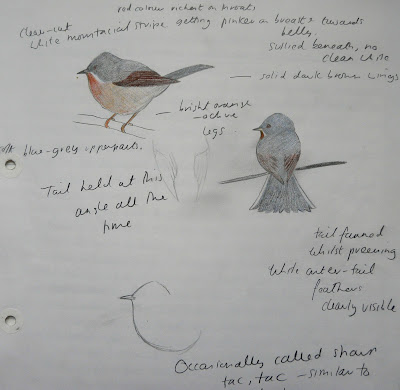 Western Subalpine Warbler - presumed S.c.iberiae - Higher Kineggy, Cornwall - April 11th 1996
The first Subalpine Warbler that I saw in Britain was way back in 1996, at Higher Kineggy in Cornwall. I twitched it with Kev and I think I'm right in saying that there was no question about which race it was. As far as I remember, back then, Subalpine Warbler was just one species and that was that, or at least as far as we were concerned. Seeing the Eastern Subalpine on Sunday prompted me to dig out my notes for that day and although my sketches are pretty crappy I'm glad I did them, because I reckon they point strongly towards it being a Western Subalp - sullied underparts (with a definite orange tinge on my sketch), not too dark on the throat and a narrow sub-moustachial too. I even mentioned there was no clean white below so perhaps I did have an inkling about eastern races back then. I can't remember and to be honest I very much doubt it! It was good to get to the 'tac' call too. I don't think I can do anything to rule out the north African Western subspecies and I don't really trust my detail on the tail. I drew what I saw but I doubt I paid much attention to the exact pattern of white on the outer retrices back then.
Prior to 1996 I remember going for a Subalp in Dorset with the legendary Pete Dennis but we dipped it. Believe it or not, before Sunday, I'd not seen another Subalp in Britain since the Higher Kineggy bird, but that just goes to show how little twitching I've done. 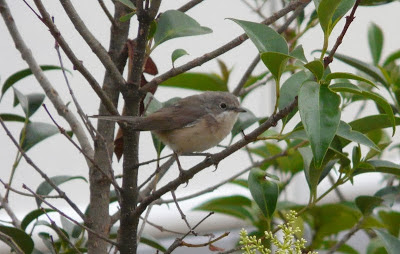 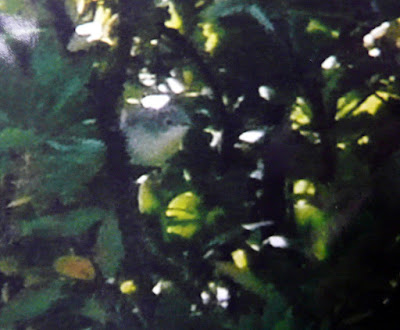 Female-type Moltoni's Warbler - Corsica - 30/7/11 - This bird drew attention to itself by uttering a Mistle Thrush-like rattle - very different to Western Subalp. I saw several on Corsica but as you can see they were difficult to photograph and I devoted more of my energy to finding Marmora's Warblers that shared the same habitat. I also found Moltoni's in western Italy, on the Livorno coast - again birds were located by the odd Mistle Thrush - like call but they were sods to see.
As far as birds in Exmouth go - there were 3 Arctic Skuas lingering off the seafront yesterday evening and 27+ Manx Shearwaters went south during a brief spell of sea-watching.
Today there was a single Arctic Skua present along with 11 Common Scoter, 1 Sanderling, 1 Great Crested Grebe 2 Little Tern and 15+ Sandwich Tern.
Posted by matt knott at 14:31