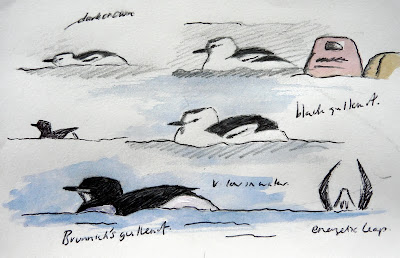 I very rarely twitch because the driving feels like such a boring waste of time, I feel guilty about leaving Lu and the kids without the car and, of course, it's costly. However some species, like Brunnich's Guillemot, just niggle me. I fought the urge to go for this yesterday but came to the conclusion last night that I simply wanted to see it, could go for it and would regret it if I didn't. I left with a green light from Lu at 6am this morning and was there for 730'ish. It was a sod to get good views of, diving and travelling huge distances only to resurface for nanoseconds, and consequently my sketches are dreadful. It's weird how the black guillemot barely shifted position in all the time I was there but the brunnich's guillemot was like a bloody willow the wisp! Eventually I decided to sit on Osprey Quay (I think that's where I was) and just wait whilst the crowd charged up and down in a game of cat and mouse. It paid off with the bird bobbing up just feet in front of me, but I would still have preferred longer views and the opportunity to really study it. I was back in Exmouth before 1030am. 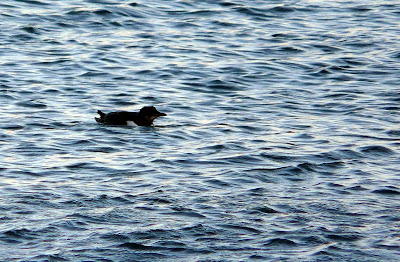 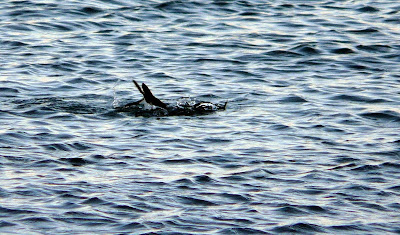 This afternoon I did a quick scoot around Orcombe and then Maisie and I walked the dog along the river. Orcombe was quite quiet with 1 pied wagtail, c10+ meadow pipit, c50+ skylark, 6+ snipe, 3 song thrush, c40+ linnet, 1 red-throated diver, 1 diver sp, 1 female velvet scoter and 6 common scoter. 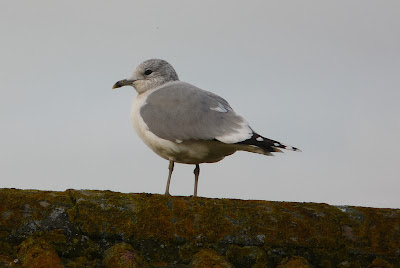