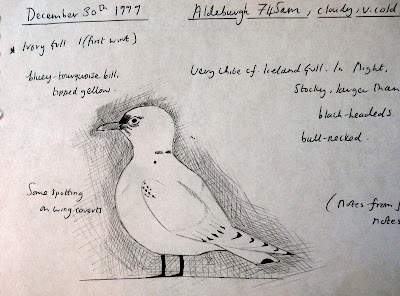 Don't panic - not a Devon ivory gull ............yet! This is the 1999 Aldeburgh bird. When local birding is slow I sometimes get the old logbooks out for a bit of reminiscing - another good reason to keep detailed notes. I make quite detailed diary entries for good birds or just good days. I did a big write-up for this particular day as it was quite eventful. Lu and I were staying up in London with her sister at the time and I left the city shortly after 4am to be at Aldeburgh for dawn. The ivory gull, a much wanted tick for me, showed brilliantly on the beach allowing me to get some sketches and photos. I was surprised at how large and how oddly structured it was - peculiarly short-legged and dumpy. I was also taken aback when it flew onto a rooftop with the local black-headed gulls - imagine that on your house! The day went decidedly downhill after that. Next to Benacre Broad for white-tailed eagle. I approached the Broad along the beach and almost immediately, with the bins,  picked up a large eagle-shaped lump way off in the distance. I excitedly extended the tripod legs and locked the scope on to the exact spot only to find no lump there. Every duck on the Broad took off in panic but despite frantic scanning I couldn't get on the now airborne eagle. I continued to the hide where a birder confirmed that the lump had been the eagle and that it had now disappeared. I couldn't count it on those views and to this day I still need white-tailed eagle! Five shorelark on the beach were some compensation but I'd dipped a bird I'd actually seen! The day got worse because despite getting back to London in good time I could not find the house in Fulham that we were staying in. I drove around large chunks of West London for nearly 2 hours before Lu's sister was able to direct me home over the phone - it was a nightmare but worth it for an ivory gull!
Posted by matt knott at 08:44