Birding Orcombe can be great but it can also be extremely frustrating. Orcombe doesn't often hold species for long. This year's white-fronted goose was an absolute exception. All my best Orcombe birds have been one day birds, or less, and a heap of good stuff has just flown straight through. I've had to let a lot of potentially good stuff go as I just can't be 100% sure I've correctly identified the species.
A couple years ago I heard an odd, nasal, single-note call - It was repeated several times and I briefly got on the bird, just a silhouette but obviously a finch of some sort. It continued west and I was left all day with the niggling feeling I'd witnessed a twite fly through - what else could it possibly be? Later that afternoon, still bugged, I birded an area around Foxholes and suddenly I could hear the same call coming towards me, quite low - unbelievable, a second bite at the cherry! Fully expecting a twite to fly over I got the bins on it but it was a brambling! I must have heard hundreds of brambling over the years but this call just didn't register - certainly not the typical loud and nasal 'vooeet'.
It seems every autumn something trips me up and years of experience often seem to count for nothing.
This autumn's lapland bunting didn't sound quite right as it took off and had I not seen it well in flight, and later on the deck, I wouldn't have counted it (and I'm not going to submit my heard-only snow bunting).
The richard's pipit thankfully called several times and showed itself to be large and long-tailed. The call was spot on and having seen the slighter, shorter-tailed blyth's before I'm happy the identification is correct. I'd have let it go had I not had reasonable views and repeated calls. 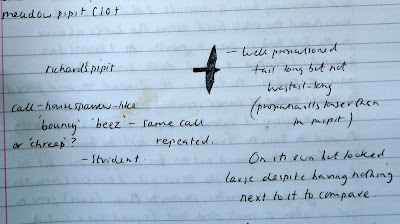 Several years ago I pursued what I originally thought was a serin, near the Bridge Inn, Topsham. After a while I realised the call was coming from beside the river Clyst - it was a common sandpiper belting out a rippling three syllable call that I'd never heard before or since for that matter!

I don't think I'm too cynical a person but I have to admit I shudder when rare species are 'heard-only briefly' fly-overs or seen poorly by the observers. In my experience common birds often make 'rare' noises. 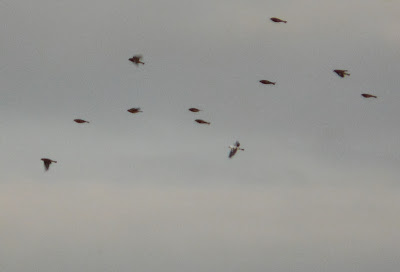 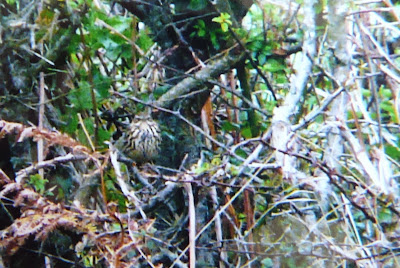 This red-throated pipit gave me the right run around in October 2009. Initially the call sounded scarily tree pipit-like and I would definitely not have counted it had I not eventually seen it well. Last year's bird was heard repeatedly and uttered the classic hissing 'psssssss' at close range in take-off and in flight. Again, a distantly and/or briefly heard bird would have been let go.
Posted by matt knott at 12:12