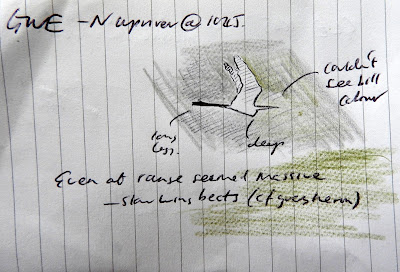 Great White Egret field notes - made immediately after watching it fly upriver.
I finally got Great White Egret from the house today. I was watching from the back garden and even with the bins, suspected what it was going to be -  a white 'dot', high up and flying purposefully north in a straight line with slow, lumbering wingbeats. It took me some frantic seconds to get it in the scope where I was able to take in more detail. The last one I had in Exmouth was a French-ringed bird in July 2014. Also noted - the Black Brant with 2 Pale-bellied Brent Geese, 5 Song Thrush and the White-cheeked Pintail from Mudbank.
Earlier on I'd done Orcombe Point from dawn. I probably missed some good stuff because I was wrapped up with a huge movement of Woodpigeon - all going west or north-west and totalling c35,000 birds, though I'd be the first to admit that there could be some margin of error involved with that number!
Also overhead this morning - 5+ Redwing, c15+ Pied Wagtail, only c20+ Meadow Pipit, c20+ Skylark, 8+ Redpoll, c15+ Chaffinch, c15+ Siskin, 1 Yellowhammer, 5+ Reed Bunting, 7 Starling, c50+ Jackdaw and c20+ Linnet. Also 1 Kestrel, 1 Coal Tit, 1+ Bullfinch, 1 Chiffchaff and 9+ Song Thrush.
Late this afternoon I had a wander around the Bystock reserve and had at least 3 Firecrest in Holly trees at the north end. 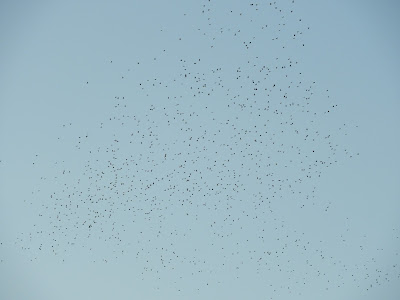 It was incredibly difficult to count the waves of Woodpigeon moving over Orcombe this morning. Normally I have Nick to help me but not this morning. I estimated the biggest flocks to consist of 4000+ birds but I could be quite some way out. The biggest flocks formed enormous 'ribbons' of birds that stretched across the skyline. Great to witness this after missing out last year. The main movement lasted until about 9am when it noticeably quietened. I left at 10am. 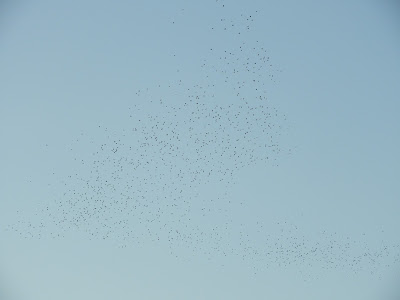 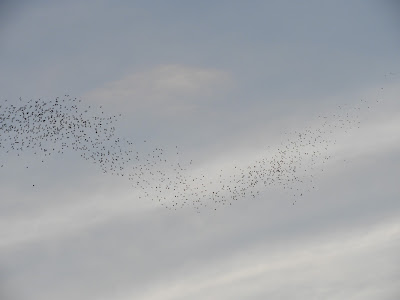 Just a fraction of a vast 'ribbon' of birds moving west across the bay.
Posted by matt knott at 09:04