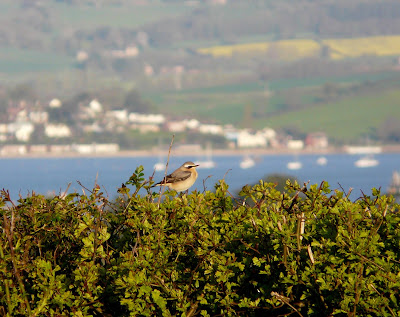 Wheatear - one of 24 recorded this morning, 15 of which were together on this hedge at the top of Gore Lane. Most moved on quickly.


It was quite good by Orcombe standards this morning, with cool and overcast conditions dropping a small number of migrants. I was on site for 0630 and recorded 24 Wheatear, 4 Blackcap, c10+ Chiffchaff, 1 Willow Warbler, 1 Whitethroat (a singing male near the Geoneedle), 2+ Swallow, 1+ Meadow Pipit and, best of all, a singing Reed Warbler. It was singing in blackthorn scrub and, unusually for Orcombe, showing from time to time. There were 8 Sandwich Terns offshore and a further check off the seafront this afternoon produced 11 Sandwich Tern and 3 Grey Plover.
Back at home the Yellow-browed Warbler was singing in the front garden of number 35 and, for the first time, it actually fed in a couple bushes in our front garden! A short stint from the back garden produced my fourth Osprey of the spring and 4 Whimbrel. The Osprey was picked up circling high over the river at 0935 before drifting back towards the Warren. I picked it up again shortly after 10am as it flew back upriver towards Exeter. 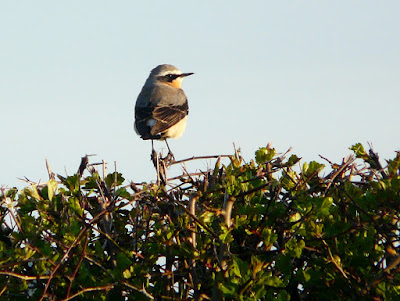 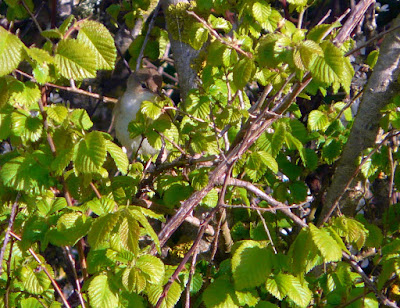 Reed Warbler - a tricky species to catch up with in Exmouth. For example I didn't manage to see a single one last year. The few that I have seen over the years are usually late spring individuals. 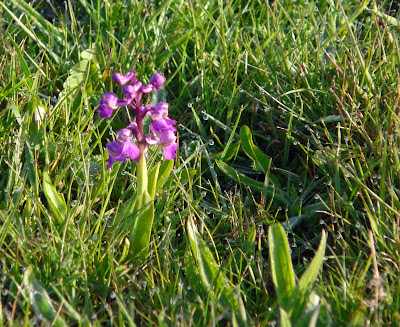 A few Green-winged Orchids are appearing close to the Geoneedle. 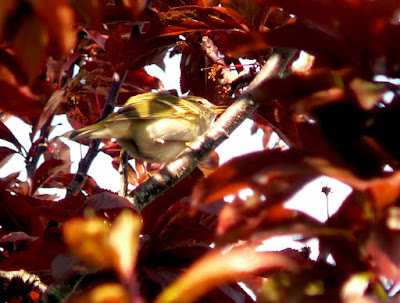 The Yellow-browed Warbler has been singing a lot this morning. 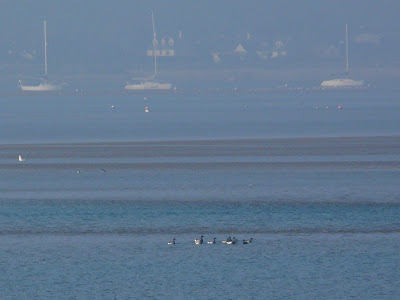 Ten Pale-bellied Brents spent the day on the lower part of the estuary yesterday.
Posted by matt knott at 08:21