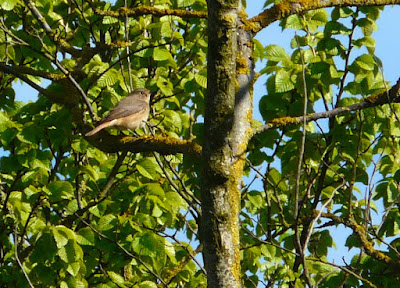 Female Redstart - one of at least 4, probably 5 Redstarts on Orcombe today. The rest were males but none stayed still long enough for me to get a decent photo. This female was in the Bristol Schools camp. I had males on the dung heap, near the Iron shelter and around the top flat field. The latter almost certainly with a fifth bird.
I almost didn't go out this morning but, as usual, I was wide awake at 6am and it seemed a shame to waste an hour before getting ready for work, so I zipped up to Foxholes. As I opened the car door I was greeted with the reeling of a Grasshopper Warbler. It was singing from one of the gardens right next to where I park the car. A Willow Warbler burst in to song and I cursed the fact that I had so little time. Fortunately however, despite a meeting after work, I was able to pop back up late this afternoon and give the area a little more coverage. Totals included 3 reeling Grasshopper Warbler, 4+ Redstart, c50+ Willow Warbler, 3 Whitethroat, 8+ Blackcap, 3 Swallow and 10 Wheatear.
A very decent fall by Orcombe standards but I guess it's a bit disappointing not to get more variety, though Terry Smith scored a couple Sedge Warblers this morning - a species I've yet to see in Exmouth this year.
A late look at the river from the back garden produced a flock of c25+ Pale-bellied Brent Geese flying upriver. 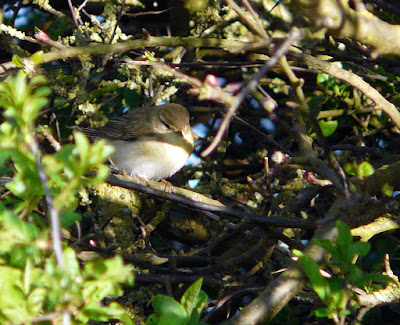 Willow Warbler - the stars today - the coastal blackthorn was heaving with birds feeding up. c50+ is probably a conservative count with many more seen this evening than early this morning and every patch of scrub harbouring birds. Really good to see after last autumn's poor showing.
Only a handful of Chiffchaff noted - most apparently on territory. 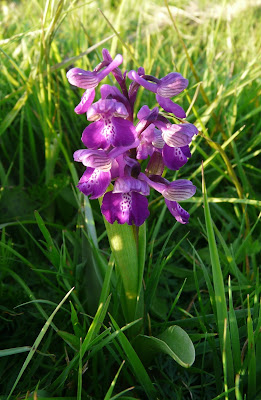