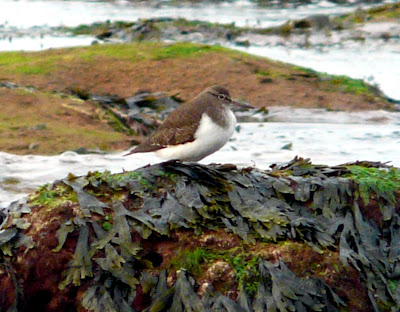 Common Sandpiper - Maer Rocks - I don't usually expect to see Common Sandpiper in Exmouth until late summer so it was nice to get this spring bird.
Orcombe Point/Maer Rocks - 0605 - 3+ Blackcap, 4+ Chiffchaff, 9+ Willow Warbler, 3 Whitethroat, 1 Meadow Pipit, 8 Swallow, 7+ Wheatear, 3 Great Northern Diver, 1 Red-throated Diver, 12+ Sandwich Tern, 2+ Great Crested Grebe, c15+ Common Scoter, 1 Common Sandpiper and 1 Turnstone.
Mudbank - 42+ Whimbrel, 7+ Ringed Plover, c12+ Sanderling, 3 Grey Plover, 4 Knot, 1 Bar-tailed Godwit, 12+ Dunlin, 1 Willow Warbler, 1 Wheatear, c6+ Sandwich Tern  and best of all 6 Little Tern.
I picked the Little Terns up as they headed upriver past Cockwood. There were 5 at first, later joined by a sixth individual. They then spent a good while fishing up and down the river between Cockwood and Starcross before powering upriver in a tight bunch. It was good to be able to forewarn Mark and Bob Bailey of their imminent arrival as they waited upriver at Turf. Apparently all six disappeared high over Topsham. It would be interesting to know exactly what they did after that!
Little Terns are pretty regular off Exmouth in the spring and summer but you can never tire of watching them. These birds have been around for a couple of days now.
Yesterday, Easter Sunday, Nick and I did Orcombe at dawn but it was terrible. Just 1 Whimbrel the only bird of note. I popped back up to Gore Lane mid-morning and was rewarded with my first Yellow Wagtail of the year, along with 2 Wheatear and 2 Willow Warbler.
The river produced just 1 Red-breasted Merganser and at least 37 Whimbrel late evening.