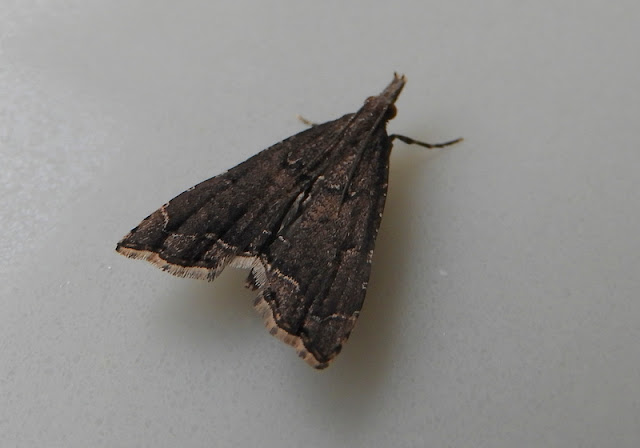 A fantastic 'third for Devon' found by Nick last night, in Budleigh - a species I hadn't even heard of - Eastern Black Tabby! Nick did incredibly well to notice this tiny micro (Diplopseustis perierescalis) was something different - found indoors, it initially defied identification, but he soon sussed it out and very kindly popped round with it this afternoon. I haven't yet done much research but apparently Britain's first record was in 2001 on Tresco, Isles of Scilly, and the second was in Exeter in 2007. There have been records from southern Europe, and in particular the Canaries, but the species originates from the far east and Australia. It would be great to know which path had carried it to a living room in east Devon. Nick's new residence is proving to be a bit of a 'mecca' for rare moths.
Many thanks Nick - a tremendous find and superb piece of skill!
Posted by matt knott at 10:32