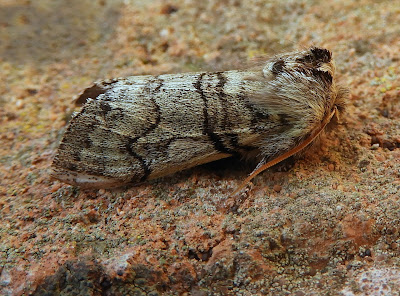 Yellow Horned - a brand new moth for me. Many thanks to Martin once again. He trapped this early-emerging spring beauty last night, at Saint Hill near Kentisbeare. It takes its name from its orangey antennae and is one of the 'Lutestring' family. It's not a particularly uncommon moth but until today I've never crossed paths with one.
Out for mum's birthday tonight so I had to do a quick post-work dash to Exminster Marshes, to meet Martin and a Yellow Horned! Chuffed to see my first new moth species of 2018, and pleased to pick up the Spoonbill too, that Martin had relocated on the floods. The end of the lane looked impassable so the bird was scoped from the Lion's Rest.
Little other news, but yesterday Mudbank was quite good with six Pale-bellied Brent Geese high north, upriver, shortly after dawn. Additionally there were 7 Goldeneye off there, 12+ Great Crested Grebe, 1 Long-tailed Duck and a second-winter Mediterranean Gull. 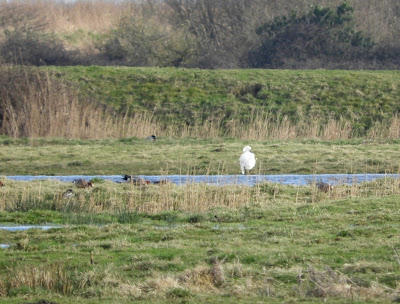 The distant white 'blob' is a Spoonbill - presumably the same bird that has been at Ferrybridge, Seaton, and Budleigh. 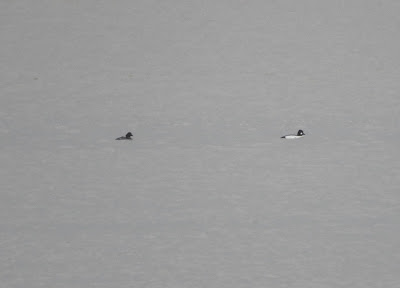 The Goldeneye are always mid-river for me in Exmouth, so this is about the limit of what I can get with the camera. Seven birds yesterday included two drakes, which predictably displayed to the females every so often. The Long-tailed Duck was off Mudbank yesterday too, looking a bit left out.