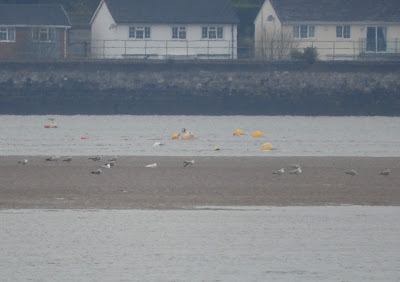 Iceland Gull (presumed juv) - Bull Hill - photographed from the Quay.
A wet and miserable day today but thanks to a text from Kev this morning, I was able to finally see an Iceland Gull in Exmouth - my first for a couple years, though I've missed a fair few that have been seen from the Warren. Initially neither Kev nor I were sure which 'white-winger' we were looking at. It looked bigger than its neighbouring Herring Gulls but long-winged enough to suggest Iceland. Its head was tucked away and we were both looking at it from miles off. Kev had the additional difficulty of watching it 'back-on'. When it shifted position it was clearly an Iceland - short-billed, long-winged and about the same size or slightly slighter than the Herrings. It's interesting how its 'whiteness' can give a false impression of size! Having said that, when you see a 'Glauc' on Bull Hill it usually pretty obviously Glaucous Gull from the outset.
Earlier I'd done a quick whiz round Orcombe where the highlight was my first Willow Warbler of the spring - a singing bird in the hedgerow just below the paddock. In the same stretch of hedgerow was a Firecrest, which I suspect is probably the bird that has been around for some time. The only other birds of note were 3 Chiffchaffs and 2 Eider way off the point. 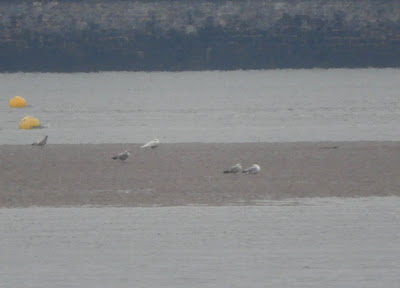 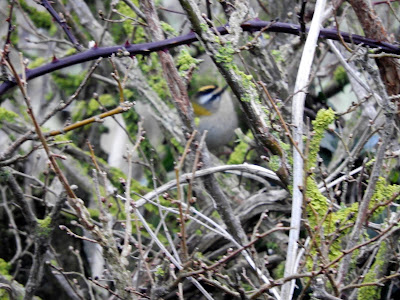 This is the only shot I've managed of the Firecrest. It stays well hidden but is quite vocal.
Posted by matt knott at 08:58