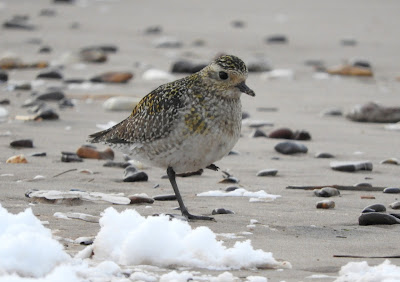 This Golden Plover tumbled out of the sky and landed on the beach just feet in front of me. It was the only one I saw this morning, but I found a couple more on Orcombe Point this afternoon. The only other species noted on the narrow strip of sand that wasn't snow-covered, were a single Fieldfare, 3 Pied Wagtail, 2 Stonechat and a Meadow Pipit.
Quite unbelievably it was another 'snow day' today so, with the college closed, I set about covering some ground in Exmouth. I did a three hour walk from 6 'til 9am, covering the estuary, the beach and Orcombe Point in a big loop.
The scenery was beautiful but I was surprised at just how few birds were around. Fieldfares and Redwings passed overhead in reasonable numbers, mostly heading north -west, but otherwise I only logged 10 Chiffchaff, 2 Stonechat, a couple Skylark and a single Golden Plover. Thirty-six Common Gull were off Mudbank and Orcombe produced singles of Kestrel, Peregrine and Sparrowhawk. I got back for breakfast, relieved not to have seen many struggling birds but somewhat perplexed at just how little was around.
Once home the sun came out and a rapid thawing of snow began. This meant that this afternoon I was able to get the car out, so I nipped back up to Orcombe. A very obliging Golden Plover was feeding around the Geoneedle, and another was in the field above the orchid field. I reached the dung heap and found 3 or 4 Meadow Pipit and a couple Rock Pipit on it, but the wind was blasting directly into my face so it was very uncomfortable viewing. I locked on to what I assumed was a Meadow Pipit, back on to me on one of the mounds, when it was joined by a Rock Pipit. It was clear that the apparent 'mipit' was bigger than the Rock Pipit, so I looked at it harder. The wind was making my eyes water so I tried to adjust my position in the gateway, but as I did so the bird took off and flew past me. It was obviously way too bulky for a Meadow Pipit and I realised I was probably looking at a Corn Bunting.
It flew across the lane and appeared to come down on the other side of the hedge, so I edged in to the field, and was relieved to find it perched up on the sunny side of the hedgerow. Relief!
Soon it flew back across the lane and shortly afterwards I relocated it back on the dung, where it remained until I left. This is my third one on Orcombe Point, which almost qualifies it as a 'prime site', such is its rarity in the county. The previous records were November 17th 2007 and November 14th 2010 (Maisie's birthday). Both previous records were in the top fields, as was today's bird, but that was back in the day when the farmer left stubble over winter.
I was chuffed that Spencer, Andy Bond and Dave Stone were able to connect. The warmth of the dung no doubt helping to keep the bird 'insitu' for a while. 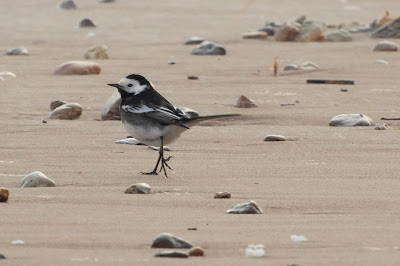 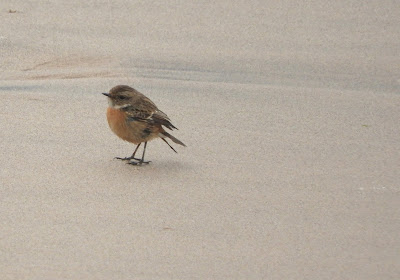 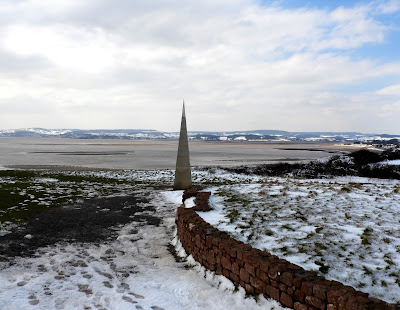 The Geoneedle this afternoon - after a lot of snow thaw. 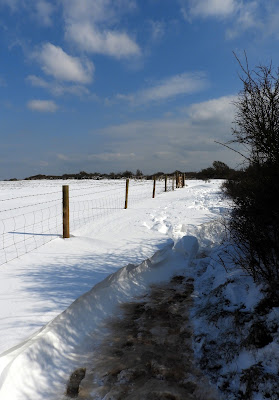 The snow was still deep in places this afternoon, despite the thaw. I was knee-deep in it at times this morning, necessitating the emptying of wellies at one point. 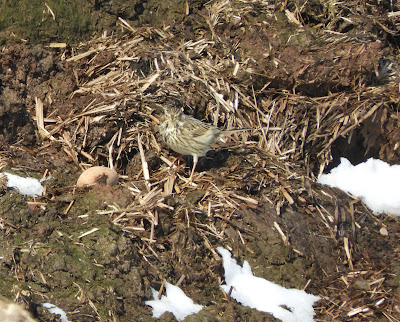 Corn Bunting - remarkably Meadow Pipit-like at times - or is it just me? 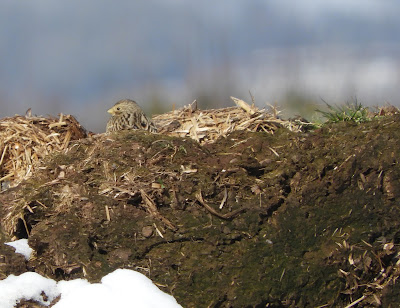 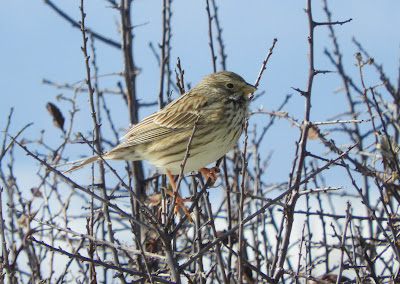 I'm really pleased with this shot. I photographed my first one on Orcombe, back in November 2007, but it was a blurry 'blob' and barely recognisable. My second evaded all my photography attempts and departed a bit prematurely too. 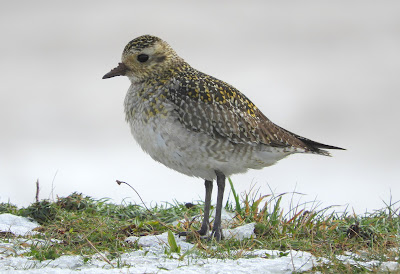 This Golden Plover was feeding around the Geoneedle. 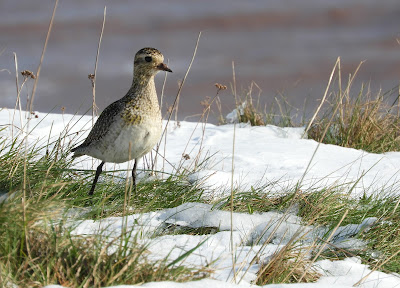 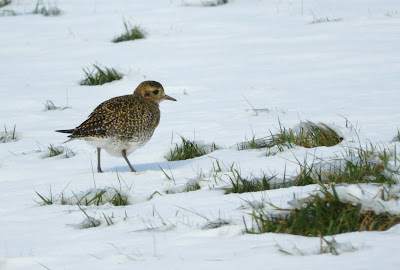 This one was in the field above the orchid field. 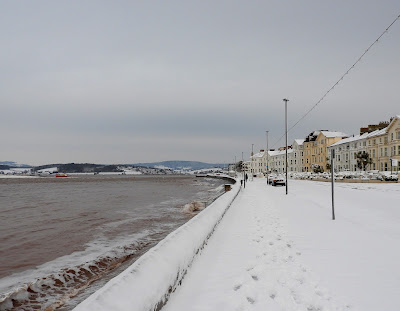 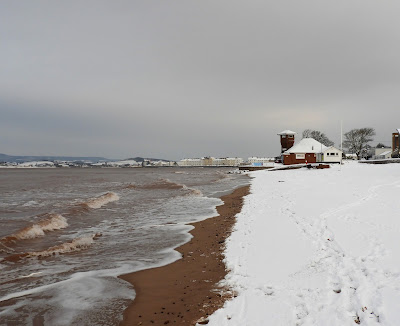 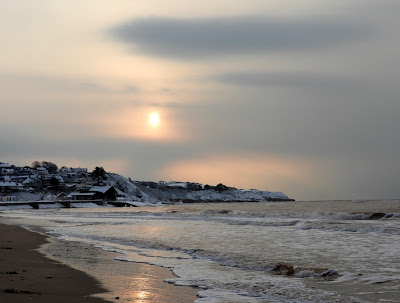 Orcombe point from Exmouth beach.
Posted by matt knott at 10:19