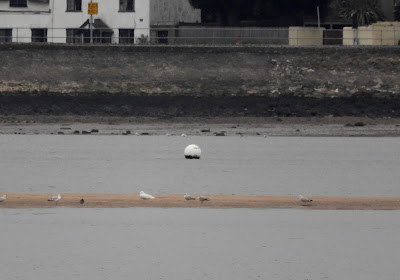 Glaucous Gull off Shelly Beach. Presumably the first-winter that's been seen for a while off the Warren.
I had a quick scoot round before work this morning and was a bit surprised to find the adult Bonaparte's Gull flying round off Maer Rocks (0625). It drifted out in to the bay and eventually ended up way out off Orcombe Point. Also on Maer Rocks today - 7+ Purple Sandpiper, 35 Dark-bellied Brent Geese, 2 Canada Geese and 7 Turnstone.
This morning the Long-tailed Duck was off the Grove and this evening it had been replaced by the immature drake Eider.
A Sandwich Tern was off Shelly Beach early on and 8 Sanderling were off Mudbank.
Late this afternoon the Glaucous Gull was on Bull Hill, viewed from the Quay.
Not a bad selection of wintery birds today but where are all the migrants? 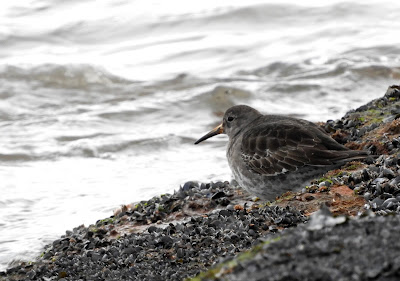 One of 7+ Purple Sandpipers still on Maer Rocks this afternoon.
Posted by matt knott at 11:09