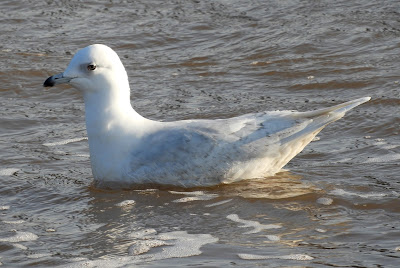 Second-winter Iceland Gull - Teignmouth
This winter will probably be remembered as a good one for Glaucs and Icelands, but if you live in Exmouth you'd never know it. So far just a couple of juvenile Glaucous Gulls have graced us with their presence, so this afternoon I crumbled, and headed over to see this gorgeous second-winter Iceland Gull off Teignmouth seafront. Mark had said it was showing well and he wasn't wrong. The only shame was that I had so little time with it, because I'd already squeezed in a quick look off Lower Netherton, in a bid to reconnect with my beloved old patch.
Earlier, Paul Gosling and I had relocated the Pink-footed Goose, from Powderham Corner, whilst our sons were warming up for their football match near Countess Wear. The bird was miles away but worth the little excursion, if only to prevent getting frozen whilst waiting for the game to start! The two Snow Geese were also distantly on view, along with a couple Greylag Geese.
My usual early look off the seafront produced the Long-tailed Duck off the Grove and my highest count, so far this winter, of 12+ Purple Sandpipers on Maer Rocks. A Great Northern Diver was sat on the sea off there, and two immature drake Eider were off there too.
Off Mudbank were 2 Peregrines, 2 Grey Wagtails and 90+ Redshank, along with a few other bits and pieces. 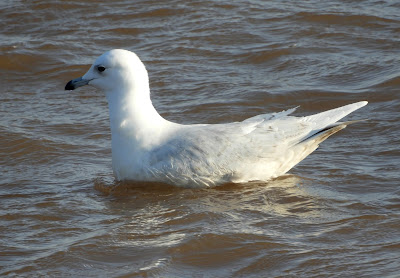 Notice how dark the iris appears when the head is slightly angled away. 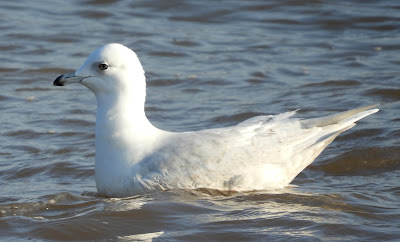 What a beautiful bird! Note the pale grey mantle and limited patterning in the wing coverts. 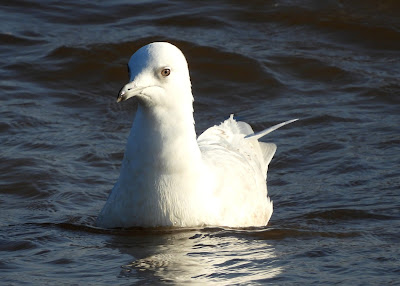 The iris is actually a subtle buff-grey and the bill base is an insipid buffy colour with a greenish tinge. The pale tip to the bill can be seen at this angle. 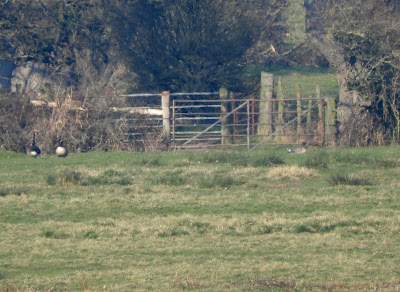 Pink-footed Goose - in my defence it was about a mile off. I've included this photo simply because the chances of one turning up in Exmouth are, at best, remote. You might see a tiny bit more detail if you click on the photo to enlarge. 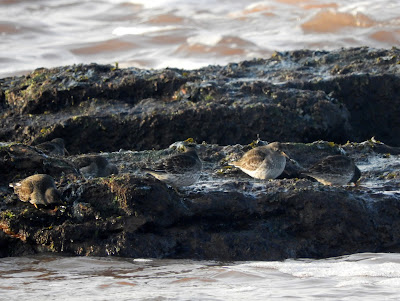 Six of the twelve (or possibly even 13) Purple Sandpipers on Maer Rocks this morning. My highest count this winter.
Posted by matt knott at 09:11