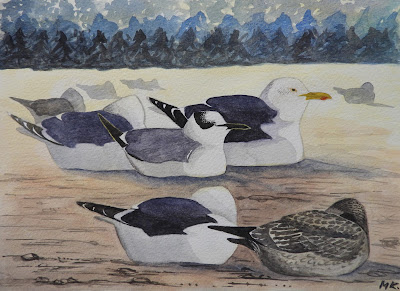 
In September 1996 Kev Rylands and I embarked on a four day round trip, that took us first to north Norfolk, then to Essex and back to Devon via Hampshire. It was great fun and we saw some fabulous birds that included; Spoonbills at Cley, Lesser Grey Shrike at Burnham Overy Staithe, Spotted Crake, Marsh Harriers, Bearded Tits, 16 Little Stints and Pied Flycatcher at Titchwell, Little Gulls, at Sheringham, Purple Sandpiper at Salthouse, Red-backed Shrike and Pink-footed Geese at Holme, Red-necked Grebe, Black-necked Grebes, Buff-breasted Sandpiper, LRPs, Ruff, Ruddy Ducks, Long-tailed Skua (juv) and Pectoral Sandpiper, all at Abberton Reservoir (Essex), Baird's Sandpiper and Hobby at Need's Ore (Hampshire) and Laughing Gull and Rose-coloured Starling in Devon. Great times and some tremendous birding with Kev.
Here is my diary entry for the 16th - the twitch for the Laughing Gull, at Portworthy, from Kev's home in Aldershot:


It's been a long day - mostly driving but very worthwhile. It took us a little over an hour, from Kev's house in Aldershot, to get to Beaulieu Motor Museum, from where we picked up permits for Needs Ore. It was weird getting the permits from a very officious building in the complex. A secretary sat us down and gave us the details and map and we paid £1 each.
It was a short distance to the reserve, on the private Beaulieu estate, and a short walk from the gritted lane besides which we parked,
The reserve is just a big pond, mostly reed-fringed but with nice muddy edges. There are two hides and there were no birds from the first one we tried, so we went round to the other and, after a short while, a small flock of small waders flew in to view. I quickly picked the Baird's out amongst them. We had good views but the flock sometimes flew or walked  to the right, out of view, and we had short waits before they walked or flew back. There were only four other birders in the hide and they were having trouble picking the bird out, but I'm pleased to say I found it easy. I managed to get some reasonable notes.
We watched it for at least three quarters of an hour and enjoyed a Hobby eating dragonflies, on the wing, over some trees at the back of the water. At about 12'ish we planned to check the line and go for the Citrine Wagtail that was at Chew yesterday, but there was negative news so we pushed on back to Devon to try for Laughing Gull.
It took us a while to get on the M27 because we set off for Southampton and had to track back, but the journey was pretty good, via Dorchester, Honiton etc. We hoped to get to the ECC works for the roosting gull but wanted to give ourselves plenty of time because we weren't sure about the site.
At about 4pm we found the works but there were no gulls anywhere, so we went back in towards Plympton to get some grub and find out some more exact details.
Kevin got through to Dave Hopkins and we found out we'd been in the wrong place. We went back and took a dead end turning off towards Portworthy where other birders were already overlooking a clay quarry basin, which was part-flooded. Tonnes of Canadas were on the water's edge and gulls were resting on the clay.
Other birders present were Pat Mayer, Mush, Rob Kempster and John and Jean Woodland. Colin Bath and Steve Bird arrived later.
After half an hour or more someone shouted 'there it is' and it flew in and landed. It then flew a short distance again and plonked down - lying amongst Lesser Black-backed Gulls. Apparently there were Yellow-legs there but the light made it hard to see any detail.
I did several sketches of the bird (found by Mush at Chelson Meadow Tip) and made the decision to go for the Rose-coloured Starling at South Milton, before dark.
The gull feeds on the tip by day and is apparently invisible, except for when in flight, so it was good to get it on the deck.
We got to South Milton, via Aveton Gifford, much more quickly than I expected and ran to the ringing hut as light was fading. We were gutted when Bob Burridge (there with a friend) said it wasn't on view and wasn't likely to be (apparently yesterday it didn't show after 6pm and it was 645pm when we arrived).
Sunlight made its chosen ploughed field, and favoured area, difficult to view, but numerous wagtails could be watched well on the right hand side of the field.
After about 15 minutes a couple other birders who had arrived found the bird about 20 yards away, at the edge of the field. We enjoyed superb views in improved soft evening light, and I got a couple sketches.
It flew back up in to the hedge and after the second appearance we guessed it wouldn't show again.
There were 3 Wheatear in with the huge wagtail flock which comprised some stunning glowing yellow adult Yellows and loads of very clean-cut, pale White Wags - I should have studied them harder.
A good assortment of waders was in the seaweed on the beach at South Huish, and the marsh was virtually empty. A superb end to a superb day. 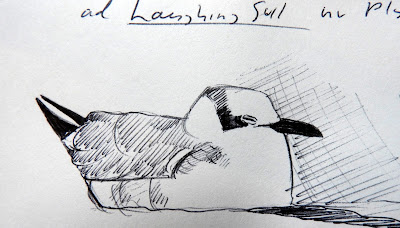 One of the original Laughing Gull sketches. 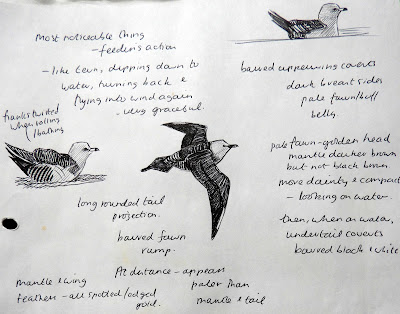 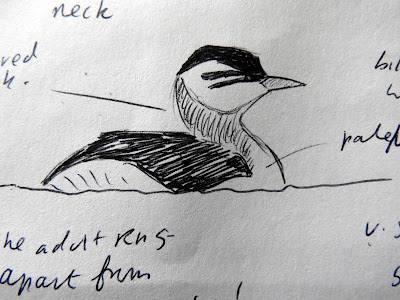 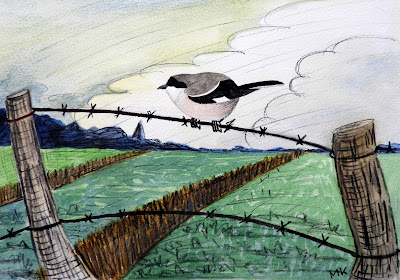