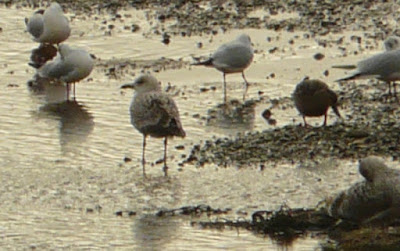 
Following  a great post by Gavin Haig here, I re-visited an old Caspian Gull record that I decided not to submit. I found the bird in February 2015, on the river Otter. Although I was perfectly happy at the time of watching it, my photos were so poor that I decided to shelve it. With hindsight I think that was a mistake. Although not the perfect, classic 'cachinnans', there were no plumage or structural features at odds with Caspian Gull (or suggestive of a hybrid). My main point of concern was the inner primaries in the photo below. They don't show the expected 'venetian blind' effect created by dark outer webs contrasting with pale inner webs. At the time I suggested that was due to the fact that the outer wing is blurred (a common theme in all my photos) and I'm still convinced that that's the case today. It seems a case of 'throwing the baby out with the bathwater' to lose this record on the basis of a crap photograph. In other respects the wing is perfect, and to reiterate what Gavin says, you can see a stripy upper-wing created by dark-based greater coverts and blackish secondaries, sandwiching a pale bar, created by pale greater covert tips. The median coverts show a similar pattern, though this isn't as easy to see.
The photo doesn't adequately show the tail pattern and underwing, but both were seen reasonably well in the field and documented in field notes taken on the spot (see below).
My original blog post can be found here. Many thanks to Tim Worfolk for his comment in support of the identification. 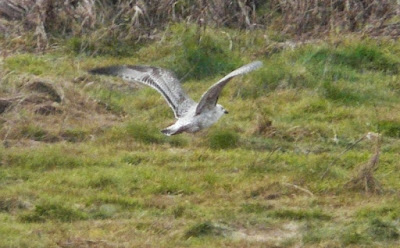 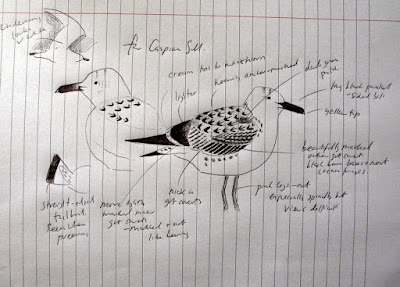 Field notes of the Feb 2015 Caspian Gull.
One of my birding ambitions is to find a Caspian Gull, in Exmouth, that's close enough to photograph well. I've had three accepted in Devon, and all three were photographed, but all badly. The two first-winters were both short-stayers and the adult was always observed in less than optimal conditions. Below are details of all three birds: 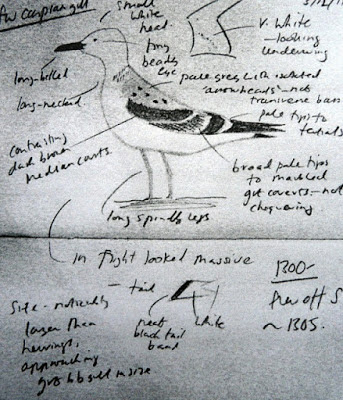 Original field notes of a first-winter found on the river Otter on 3/12/11. A fabulous looking bird but brief and through a scope. 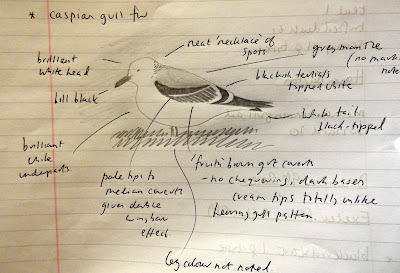 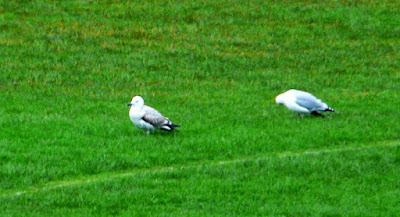 First-winter Caspian Gull - Warren View playing fields 14/12/12 - photographed from the house but at a distance. Absolutely stunning through the scope. This is my one and only record in Exmouth, but that's hardly surprising given the fact that the majority of large gulls in Exmouth shun convenient viewing spots for sandbars, half a mile out in the estuary or off the seafront. A rubbish tip would be handy!
Posted by matt knott at 11:43