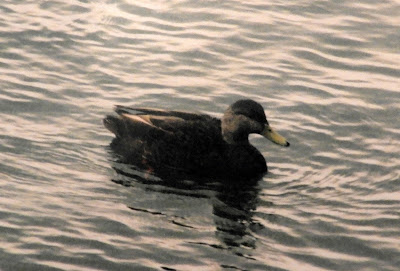 Male Black Duck - Slapton Ley 31/3/01
On the morning of October 29th 1999 I birded Start, Beesands and Slapton. I didn't see very much but at Start I bumped in to Adam Davidson who was back home in the South Hams for a while. Later that afternoon Adam found Devon's first Black Duck, from his house near Bowcombe Creek on the Kingsbridge estuary. I had a message from Tom Whiley at 4pm and shot all the way back down there, from Exeter, to twitch it. The bird was out of sight at first but soon appeared with a group of Mallard on one of the bends in the creek. We had friends coming down from Bristol that evening so I couldn't stay long. In the short time I was there I saw Pat Mayer, Perry, Mark Bailey, Dave Stone and Paul Clack.
The bird went on to put in a protracted stay in the area and was last seen on April 20th 2002. I caught up with it again on March 31st 2001, where I had more time to sketch and photograph it.
There hasn't been a Devon record since, of this north American species, but it's a bird that could show up again and it's one of the reasons I always scrutinise the Mallard flocks off Mudbank.
The only other Black Duck I've seen was just a year prior to that in 1998. Kev and I twitched an individual down at Stithians reservoir, Cornwall on October 30th. The same day we added to our 'Yank' duck tally with Ring-necked Duck at Stithians, American Wigeon on the Hayle estuary and Surf Scoter at Helston. 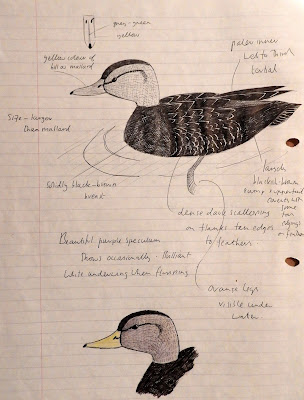 Field notes for the Slapton bird.