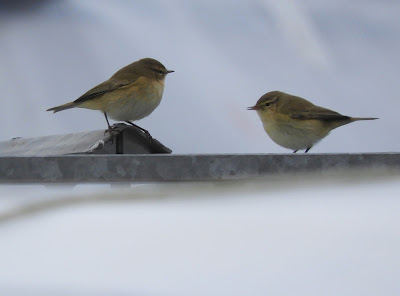 This pair of Chiffies were the first I've seen in Exmouth for ages. Both were feeding in gardens, and around boats, in the Shelly Beach area yesterday.
I had my usual look off Maer Rocks at first light this morning - 3 immature drake Eider, 2 Common Scoter, 2 Purple Sandpiper, 6 Dark-bellied Brent Goose, 1 Little Egret and 3 Turnstone.
A quick look off the Grove revealed the wintering Long-tailed Duck, 6 Red-breasted Merganser and 2 Great Northern Diver.
Shelly Beach failed to produce the hoped-for Black Redstart or Bonaparte's Gull but the Slavonian Grebe was scoped, along with a further 2 Great Northern Diver.
Other odds and ends today included a surprise Jay along the seafront, Treecreeper in Manor Gardens and a flock of c30+ Meadow Pipits in fields around West Lodge. Mudbank produced just 5 or 6 Goldeneye and a Mediterranean Gull. The Sowden Lane finch flock included c10/20+ Brambling, an estimated 200+ Linnet, several Chaffinch, a few Greenfinch and a Reed Bunting.
Yesterday the 3 Eider were off Maer Rocks, 2 Chiffchaff were in the Shelly Beach area and off Mudbank were c50+ Dunlin, 5 Goldeneye, 2 Mediterranean Gull and 10+ Great Crested Grebe.
On the 11th there was a female Blackcap in scrub around Warren View playing fields and on the 10th there were exceptional (at this stage in the winter) numbers of wildfowl off Mudbank. Birds had presumably been displaced from marshes at the north end of the river. They included c50+ Teal, 6+ Shoveler and c7/800+ Wigeon. 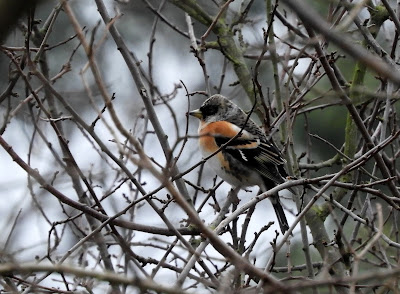 c10/20+ Brambling were showing superbly in the Sowden Lane area. The birds are feeding on the seed-heads of sunflowers. 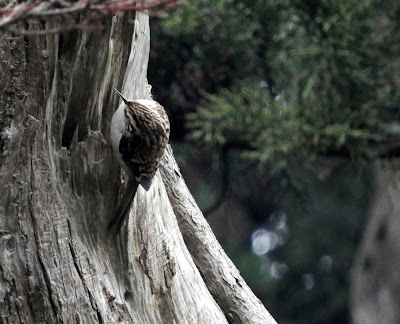 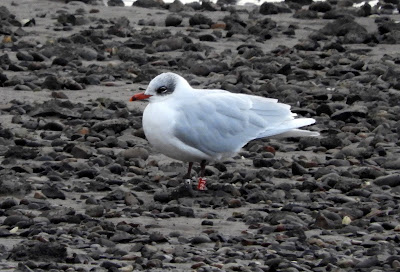 One of the two regular adult Mediterranean Gulls - this one is red-ringed PPJ1. The other is a green-ringed bird. At some point I'll get round to finding out where they're from.
Posted by matt knott at 08:43