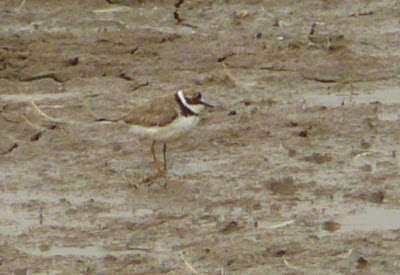 Adult LRP
I was down at the lifeboat station for about 6am but it was so wet that I soon had second thoughts. The visibility was dreadful so I thought I'd cut my losses sea-watching and go and sit in a nice dry hide. Unfortunately the nearest nice dry hide is at Bowling Green, but high tide was approaching so I thought I'd give it a go. I always feel deeply uncomfortable leaving my local patch - something I know many of you will relate to! Anyway it wasn't a bad move as the marsh was heaving with waders and wildfowl. Best bird was a Wood Sandpiper that dropped into the far corner as the rain hammered down. Also present - 2 Little Ringed Plovers (believe it or not, the first I've seen this year), 2 Spotted Redshank, 2 Greenshank, 2 Knot, 7+ Whimbrel, 3+ Common Sandpiper, 3+ Lapwing, c2/300+ Redshank, c1/200+ Black-tailed Godwit, c50+ Dunlin, 2+ Bar-tailed Godwit, 3+ Wigeon, 1 Kingfisher, 1 Water Rail plus several Curlew, Teal and Mallard.
After some breakfast I dropped Lu off at work (the kids were both at sleep-overs) and headed down to the lifeboat station again. It was still tipping down with rain but I was able to photograph another juvenile Yellow-legged Gull that was sharing the beach with 2 Mediterranean Gulls and other gull species. Offshore there were 2 Little Terns and about half a dozen Sandwich Terns but the visibility was still poor, so no seabird passage was evident.
Lastly, a quick squiz off the Imperial revealed c30+ Common Terns and a Grey Plover. I'm sure there was other stuff out there but the kids needed picking up!
Off Mudbank from around 5'ish - nice to see the first returning Pintail, 6 Wigeon, 11 Mediterranean Gulls (9 adults, 1 2w and a juv), 1 Redshank, 3 Dunlin, 5 Whimbrel, 1 Grey Wagtail and a juvenile Common Tern. 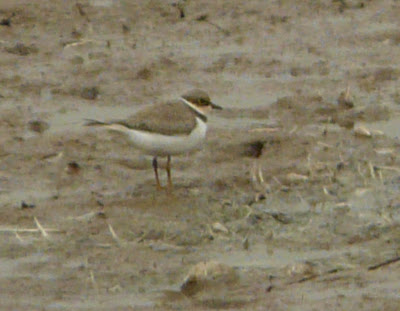 Juv LRP - I know these shots are appalling but it's a novelty to be able to feature this species on the blog for the first time. I've only ever recorded 1 LRP in Exmouth and I don't expect to see another one anytime soon. No freshwater! 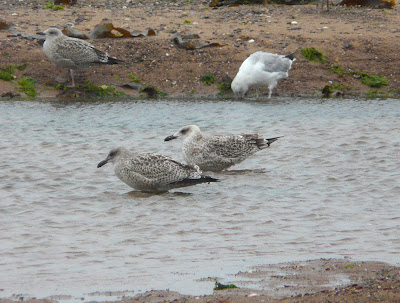 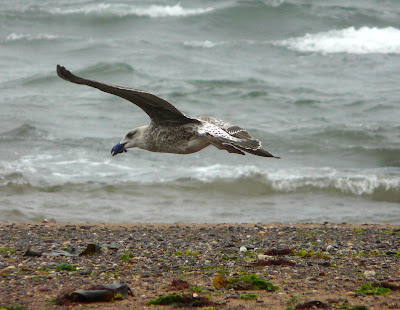 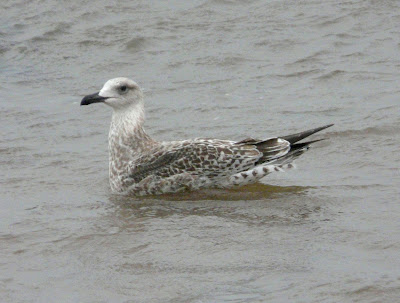 A pale and quite delicately-marked bird, in stark contrast to the last big dark one! This bird shows limited scapular moult, openly-patterned greater coverts and an atypically large amount of pale patterning in the tertials. On top of that, the tail shows a deep tail band - the broadest of all the birds' I've seen this summer and therefore not that strikingly different to that of a Herring Gull. The upper-tail area is also relatively heavily spotted. In flight the pattern of light and dark in the inner primaries confirms this is YLG. 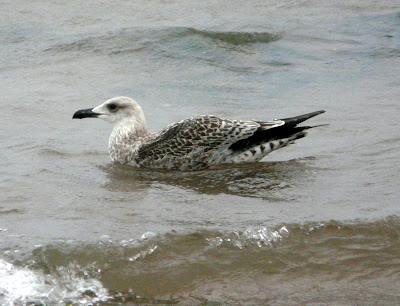 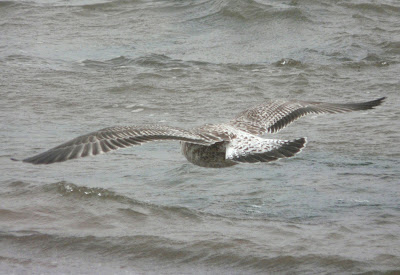 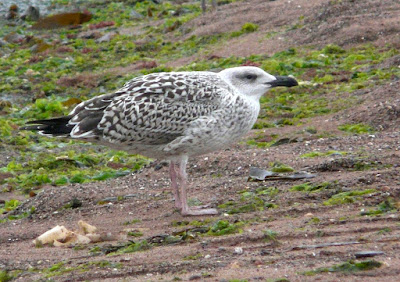 This smart juvenile Great Black-backed Gull was also on the beach.
Posted by matt knott at 07:53