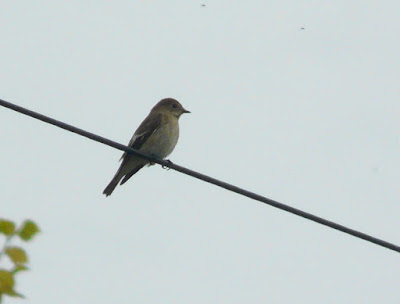 Pied Flycatcher - found feeding along the lane to the Bristol Schools Camp. Never guaranteed on Orcombe but the second this year following one in April.
I should have done Orcombe this morning but after a late night mothing (see previous post) I wasn't quite up for it. I did however manage to get out early afternoon, and logged 1 Pied Flycatcher, 7+ Wheatear and a steady passage of Swallows north-westwards. I've had a couple Yellow Wagtails go over today, whilst out and about, and a Tree Pipit flew north over the garden this morning.
Yesterday Nick and I logged a mini flock of 5 Tree Pipits on Orcombe Point and a single Wheatear.
There were 4 Black Swans distantly off Mudbank too.
Several Vapourer Moths have been bombing through the garden today and other sightings have included Clouded Yellow, Silver Y and Rush Veneer. 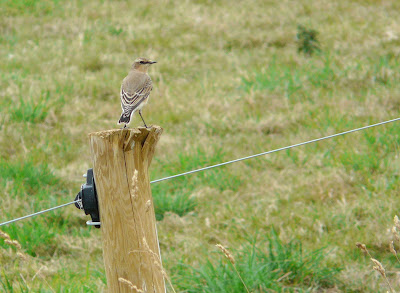 Wheatear - one of at least 7 on Orcombe this afternoon.
Posted by matt knott at 08:03