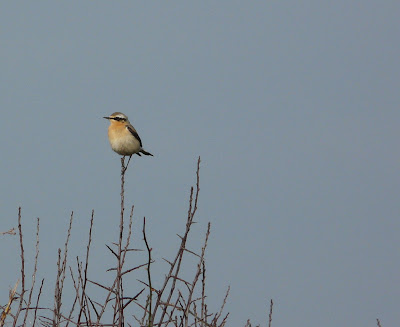 Late but by no means the latest I've had over the years. As I walked out of work I was struck by the milder feel to the air and it wasn't a huge surprise to get home and find a message on my mobile from Derek. He'd had 2 Wheatear by the Geoneedle this morning. Wheatears invariably end up in the 'top fields' on Orcombe so I parked a the top of Gore Lane and almost immediately picked this bird up sat in the 'Quail' field. A quick scoot around the immediate area, including the Bristol Schools camp, revealed 1 Firecrest, 3 Goldcrest, 1 Meadow Pipit, 1 Stonechat, 5+ Chiffchaff and 23 Linnet.
Earlier, at 0645 this morning, the Bonaparte's Gull was distantly off Mudbank and 9 Redwing were in the nearby sheep fields. Yesterday evening there were 3 Gadwall on the river off Mudbank. Gadwall are an infrequent visitor to this end of the Exe but I did have four together back in January. 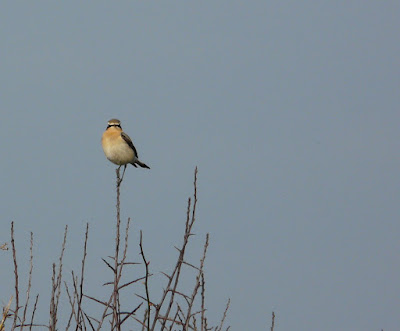 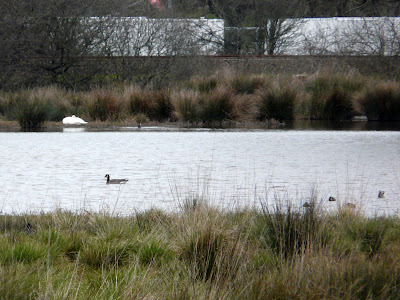 Yesterday was the first time that I've seen the Ridgway's Cackling Goose since it left Exmouth last October. We were in Exeter anyway so it seemed a shame not to pay it a visit. It's frequenting perfect habitat, with plenty of other wildfowl, on Matford Marshes but if it doesn't leave fairly soon even I'll  throw in the towel and dismiss the bloody thing as an escape!
Posted by matt knott at 10:52