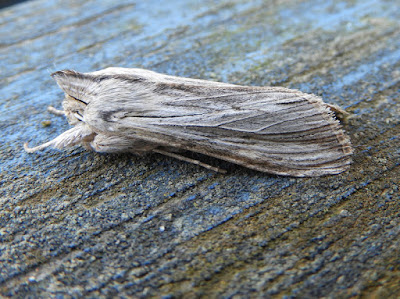 Chamomile Shark - Nick trapped this moth last night - a brand new one for me and for Nick. The main feature, which distinguishes this moth from the Shark, is the extension of the black forewing streaks on to the fringes of the wing. It also helps that this species is on the wing over a month earlier than Shark. According to 'Waring and Townsend' the larvae feed on Scentless Mayweed, Chamomile, Corn Chamomile, Stinking Chamomile and Feverfew. Nick presumably has one or more of these plants growing close by.
I never got as far as Orcombe Point this morning, but I sat and looked at the sea for a little while from around 0625. Almost immediately the gulls in the area went crazy and an Osprey drifted overhead, circling once or twice just offshore from Maer Rocks before dragging its tail of gulls towards Dawlish Warren. Other species noted included a lingering Great Skua, 4+ Sandwich Tern, 1 Common Tern, 2 Sanderling, 2 Common Scoter, 11+ Manx Shearwater and a Whimbrel.
The Whimbrel count reached 35+ off Mudbank but otherwise just 3 Bar-tailed Godwit and 2 Dunlin were noted.
Late morning we all trooped up to Yarner for a dog-walk and picnic. Birds noted included a few Pied Flycatchers, Garden Warbler and Redstart, but only 1 Wood Warbler was seen - a singing male that was ringed. Unfortunately the photo below was all I could manage. 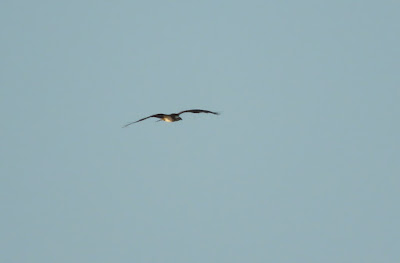 Osprey over Maer Rocks at around 0630 this morning. 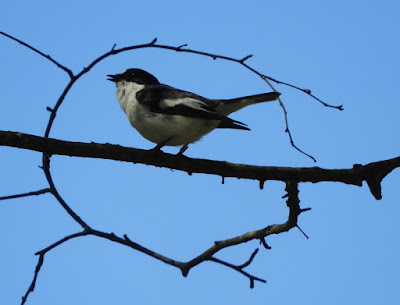 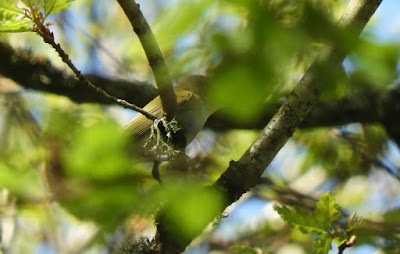