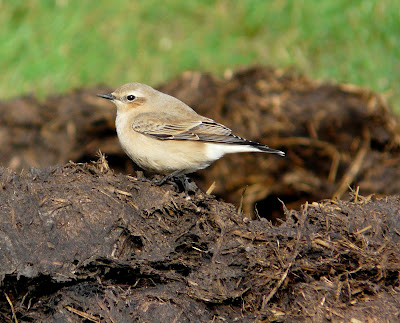 Wheatear
I had to do Orcombe faster than usual this morning as we had to be at football in Exeter for 915am. It was a beautiful morning but only the usual suspects were on the move. In just over an hour after dawn I recorded 1 Spotted Flycatcher, 4+ Wheatears, 9+ 'Alba' Wagtails, 9 Grey Wagtails, 12+ Chiffchaffs, 10+ Yellow Wagtails, c100+ Meadow Pipits, 1 Little Egret, 1 Kestrel and 5+ Tree Pipits.
At lunchtime I took a cuppa out in to the garden and scoped the river. An Osprey was hunting way upriver at 1220 and 10 minutes later it or another was putting all the wildfowl and a load of Oystercatchers up off Mudbank.
Late this afternoon an/the Osprey was again watched hunting further upriver from Mudbank (1745 and 1800) and there were 4 Dark-bellied Brent Geese, 2 Redshank, 3 adult Mediterranean Gulls, 6 Ringed Plovers, 2 Grey Plovers and my first Golden Plover of the autumn. 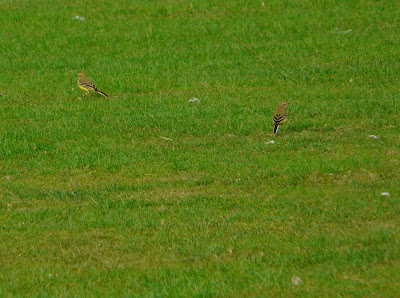 Two of three Yellow Wagtails on the cricket pitch - Thursday evening. A couple Wheatears and White Wagtails were with them. 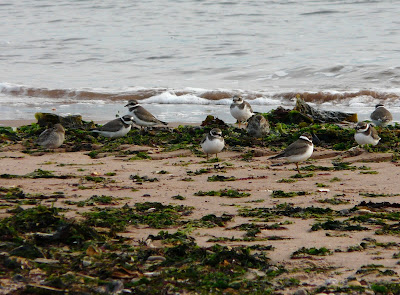 Thirteen Ringed Plovers and 2 Dunlin were on Exmouth beach on Thursday evening. This would have been quite a novelty had we not had far more birds a couple weeks ago. 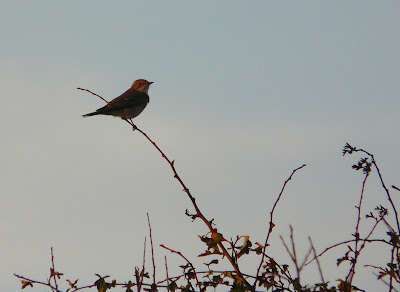 This, the third Spotted Flycatcher of the autumn, perched briefly in cliff-top scrub shortly after dawn before disappearing off towards the Geoneedle.
Posted by matt knott at 10:22