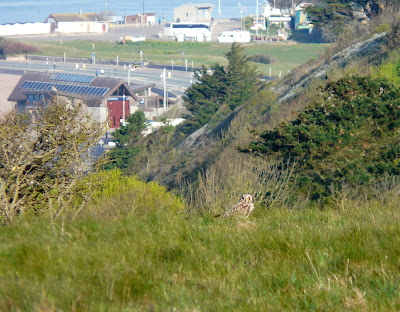 Short-eared Owl with the Lifeboat Station and Exmouth Seafront in the background.
A beautiful morning on Orcombe this morning. At 0530 I had a quick look off Maer Rocks where a single Roseate Tern was feeding with c20+ Sandwich Terns. It was a bit odd to be watching it in such cold conditions and I was glad I had my gloves on. There were 5 Whimbrel on the beach and 2 Great Crested Grebes and 2 Great Northern Divers offshore. Another look on the way home, just before 8am,  revealed the 2 Roseate Terns together.
Nick and I then covered Orcombe Point where the highlights were 1 Swift in off the sea, a flyover Siskin and the very obliging Short-eared Owl that seemed to be enjoying the early morning sunshine as much as we were! Also recorded were 5 Wheatears, 6 Blackcaps and several Whitethroats and Chiffchaffs on territory. No Willow Warblers today though.
Following a morning trip to Axminster for Joel's football match, I was able to pop back up to Orcombe again mid-afternoon. The Short-eared Owl and a female Redstart were the highlights. 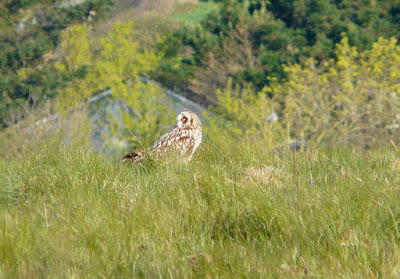 We stood marvelling at this bird for some time. We could easily have walked past it but Nick spotted it  resting in the rough grass as we walked back along the coast path. At one point a dog ran straight past it but it sat tight. 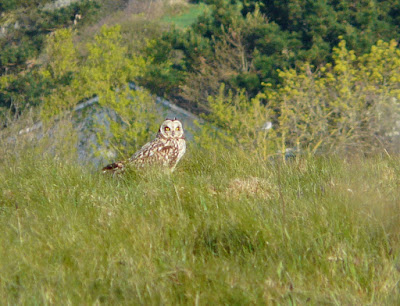 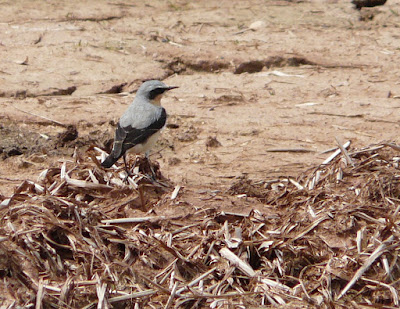