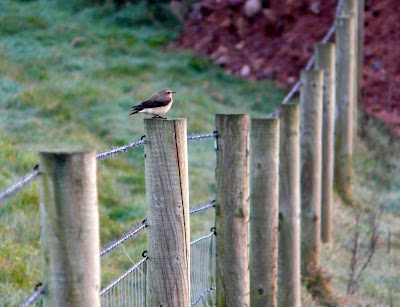 Wheatear - Orcombe Point - 1 of at least 5 seen yesterday.
Orcombe Point was practically birdless this morning so I ended up staring at the sea for a while. This proved to be a good move as at about 0715 I picked up an Iceland Gull offshore from Maer Rocks. It would have probably hung around had the tide been out but it headed sluggishly south, circling high off Dawlish seafront for a while, then drifting back out to sea before heading high in a line that put it on course for Berry Head. I kept watching it until it was a minute speck in the sky. It was an immature bird, probably a juvenile, and from what I could see, very like the last bird, only perhaps a bit more slim-line. Also off there - 2 Red-breasted Merganser, 2 Common Scoter, 3 Great Crested Grebe and c15+ Sandwich Tern.
No Redstarts on Orcombe yesterday but an obvious arrival of migrants that included 8+ Willow Warbler, 12+ Chiffchaff, 1 Blackcap, 5+ Wheatear, 2 Swallow and 2 Goldcrest. Also seen - 4 Dark-bellied Brent Goose, c20+ Linnet, 2 Collared Dove and 2 Shelduck.
Posted by matt knott at 08:20